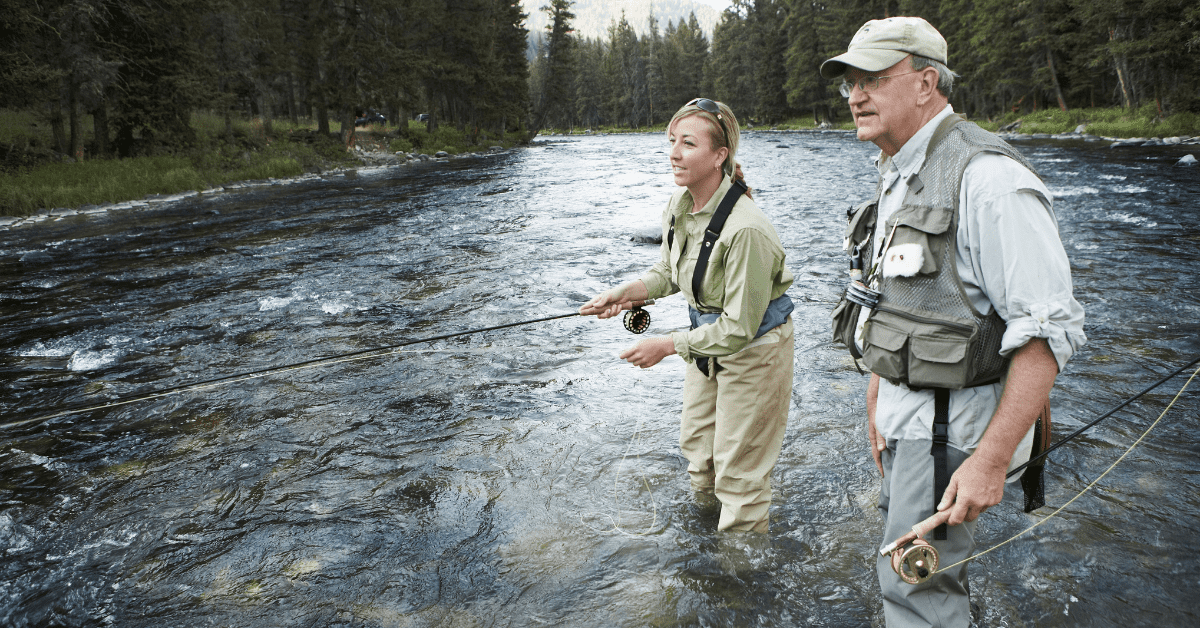 Fly fishing has been around for many centuries with earlier versions of the sport being practised back in Roman times as early as the 2nd century and in Japan a few centuries later.

It is fair to say, though, that it was first adopted at a mainstream level and documented in England from the 15th century onwards.

Now it is a popular pastime that is enjoyed from anyone to school kids to celebrities.

What is fly fishing?

Fly fishing is a method of fishing that involves a lightweight fly created from either feathers, fur or synthetic material. As the fly is very light, it cannot be “cast” in the normal fashion. In fly fishing, the energy to propel comes from the weight of the fly line, which the angler casts back and forth in a series of “false” casts until the required distance is obtained.

As the fly line is usually comparatively thick and opaque, fly fishers attach a clear monofilament or fluorocarbon leader of between 6 feet and 15 feet to the fly line and tie the fly to that.

That enables the angler to deliver the fly to the fish without the fish spooking at the sight of the opaque fly line.

The image above shows the key components of a fly fishing set up:

There are many more pieces of gear involved in fully equipping yourself for fly fishing.

The earliest fly anglers were focused exclusively on trout. You can see why – trout feed on hatching insects with visible rises and it’s not hard to imagine and angler sitting there wondering how to imitate the mayfly or caddis flies that they were feeding on.

Trout species remain the most popular fly fishing target and fooling them with a wide variety of wet and dry flies is a popular pursuit.

But there are a range of other fish that have become viable fly rod targets including largemouth and smallmouth bass, pike, muskie, as well as carp, crappie and other panfish.

In coastal waters, anglers chase redfish, snook, stripers, sailfish, trevally and tarpon. Bonefish and permit are other popular fly rod targets, along with tuna and even sharks and barracuda.

The earliest writings on fly fishing were focused on rivers – the famous chalk streams of the United Kingdom with their healthy mayfly hatches.

But soon anglers realised that lake fishing could be equally productive.

Trout behave very differently in different situations and habitats, so there are a wide variety of ways that anglers choose to target them, including:

Most anglers start out with flies they’ve purchased, but many anglers – particularly those who have mastered fly fishing – like to tie their own flies.

True masters of this art invent their own patterns, but most us are content to be able to tie well established patterns set down in books, websites articles or YouTube videos.

The key part of any fly is the hook itself. Choose the wrong type of hook and your patterns won’t look right, won’t sit well on or in the water and won’t fool the fish.

To simplify the process of selecting hooks across the wide range of brands we created our own fly fishing hook selection tool.