What is Euro Nymphing? An Introduction to No-Indicator Nymph fishing 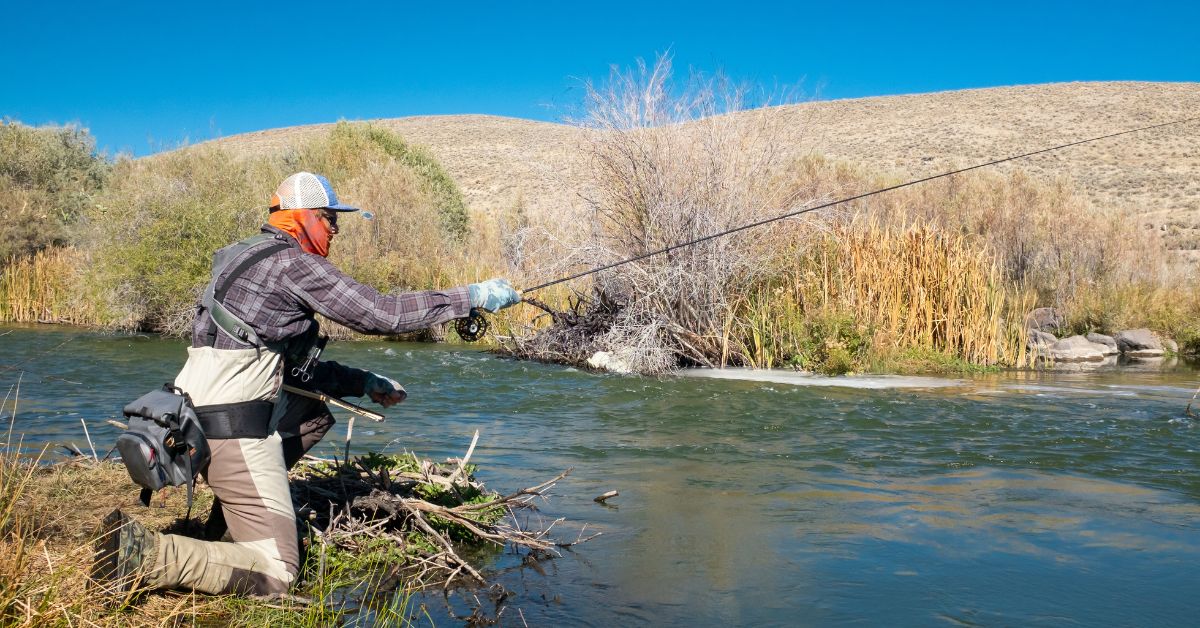 What is Euro Nymphing? An Introduction to No-Indicator Nymph fishing

Euro nymphing, or Czech nymphing, is the name given to nymph fishing with a tight line and no indicator.

Euro nymphing is also known as high sticking because of the way the angler lifts the rod to eliminate slack line and stay in touch with the nymph throughout the drift.

Euro nymphing has its roots in tournament fishing. Done right, it is incredibly effective in terms way to catch fish in large numbers of fish from a given stretch of water.

In terms of set up, Euro nymphing means nymph fishing without a strike indicator and without the use of split shot. Euro style nymphing involves standing beside the target spot and casting your nymph or nymphs slightly upstream. As the flies drift down with the current, the angler leads them slightly with the fly rod swinging the rod tip left to right if they are on the left bank of the stream and right to left if they are on the right bank.

The angler adjusts the height of the fly rod to keep as much line as possible off the water to minimise drag and maintain “touch” with the flies to feel any take. What you want is for the flies to be bumping naturally along the stream bed. Many anglers make detecting strikes easier by adding a section of brightly colored monofilament to their leader setup to act as a “sighter”. The angler watches the sighter for any sign of a pause – that’s when the strike.

Be careful not to lead the flies by too much with your rod tip as this will artificially accelerate the drift so the flies are moving faster than the river current – a sure fire way to alert the trout that something unnatural is going on. However, it’s also import not to let the flies lead the rod tip too much – this can result in missed takes.

Be careful in controlling the depth of the flies by raising and lowering the rod tip in the vertical plane as you swing it from left to right in the horizontal plain. Lifting too much brings the flies out of the strike zone and will reduce the takes. Failing to stay tight to the flies means you may miss strikes from trout hugging the very bottom of the river.

The angler allows the flies to drift to a position just downstream of where they are situated before recasting. In this way they throughly search all current lines and likely holding water in the spot before moving on. Euro nymphing is a slow and methodical form of fishing, but it certainly gets results.

No one agrees 100% on all these definitions, but it is possible to provide a reasonably coherent explanation of these styles.

Euro Nymphing encompasses all types of no-indicator nymphing from Czech nymphing, nymphing and the Spanish and Polish nymphing styles.

Arguable the leader is the most important part of a euro nymphing setup. While conventional leaders are usually between 9ft and 12ft, a Euro nymphing leader can be 15 to 18 feet in length.

A simple euro nymphing leader involves three sections with four feet of fluorocarbon tippet added at the end. One leader formula for this involves

You can also buy ready-made euro nymphing leaders with the colored sighter built-in.

Euro nymphing rods are significantly longer and lighter than conventional rods. A typical rod for Euro nymphing might be between a 2 and 4wt stick of 10-11ft in length. The extra length is critical for handling the longer leaders and allowing the angler to control the drift for depth.

The soft, slower action rods favoured for Euro nymphing allow the angler to make a decent with no fly line out from the rod tip (a common scenario). Often the angler will be using nothing more than the surface tension of the water and the weight of the nymph to load the rod, so a good Euro nymphing rod needs to be supple and easy to load.

Choose a reel that nicely balances the longer rod. It should also have a decent drag for when you are playing fish off the reel and a reasonably large arbor is preferable in my opinion as it allows you to reel in quickly in those moments a fish swims towards you in the fight and when you are packing up to shift to another spot.

Fly line choice is not critical for Euro nymphing as you are often fishing with just the leader lone out from the rod tip. Sometimes, though, you will be making longer casts, but a simple, cheap level or weight forward floating fly line is fine. The Scientific Anglers Mastery Nymph line is a good choice.

In general terms, Euro nymphs are like the standard nymphs we use for indicator nymphing. But this style of fishing places greater emphasis on sink rates, so you’ll find that many Euro nymphs are designed to sink rapidly and will have lead wraps, a larger bead and more lightly dressed or smoother body than standard nymphs. Perdigons are a good example of this.

Good exponents of Euro nymphing will have their nymph boxes divided not only by color or pattern, but also by weight. It is important to have a selection of nymphs with different sink rates to fish different depths of water effectively. Just as a nymph can be tied sparse with a large tungsten bead to sink quickly, the same fly can be tied to sink more slowly with a more bulky body and a smaller tungsten bead or a brass bead.

Euro nymphing fly anglers will often fish with a team of two flies. A more heavily weighted nymph on the point, both to get the fly down and to load the rod, and an unweighted or more lightly weight nymph tied off a dropper.

Because Euro nymphing involves fishing very close to the bottom, most Euro nymph patterns are tied on jig style hooks so they ride hook point up.

While fly weight and how they are fished is usually more important than the pattern, we have listed five popular Euro nymphing patterns here. It’s worth tying/buying these flies in a variety of sizes including some with hot spots in the form of a brightly colored thread between the bead and thorax or a brightly colored tail.

Slow down your casting stroke

The long slow-action rods and the absence of a helping hand in the form of a large section of fly line mean casting can be tricky with a euro nymphing set up. Practice on the lawn before you hit the water – you’ll find you need to slow down the timing and focus on “feel” to get the most distance

Trust in the method

Cover all sections of a spot before moving on. Euro nymphing gives you the ability to cover every current seam and every depth within a spot. Fish it thoroughly and you’ll be surprised by how many fish you can pull out of the one spot.

Euro nymphing is a really distinct and effective form of fly fishing. It is no coincidence that it arose from the tournament scene where numbers are everything. I will freely admit I am a dedicated sight fishing afficionado with a very marked preference for fishing dry flies.

But I can’t call myself a dry fly purist because, more than anything, I hate blanking. Call it what you want – getting “skunked”, eating the dreaded “donut” – I do not like not getting a single fish in a session. So if that’s looking like a possibility I will turn to nymph fishing, and yes, even Euro nymphing to make sure I can put a score on the board and I have made it my business to learn these techniques for those sort of occasions.

The final point to make about it Euro nymphing is applying some of the same techniques to your indicator nymphing is good for upgrading your game. We all get lazy and it is easy with indicator nymphing to not adjust the depth of the nymphs in deeper sections meaning our flies skate unmolested over the top of the fish. And I doubt we pay enough attention to drag and we dont dedicate ourselves to eradicating those microcurrents that are doing just enough to our flies to make our drifts look suspicious to the waiting trout.

Spend a day or two Euro nymphing and I think you will bring some of those techniques across to your conventional nymphing game and you’ll don a better job of catching fish and be a better angler for it. Even if you decide Euro nymphing is too “slow” for you or not your cup of tea, at least you’ll have it in your it in your fly fishing bag of techniques to avoid blanking!