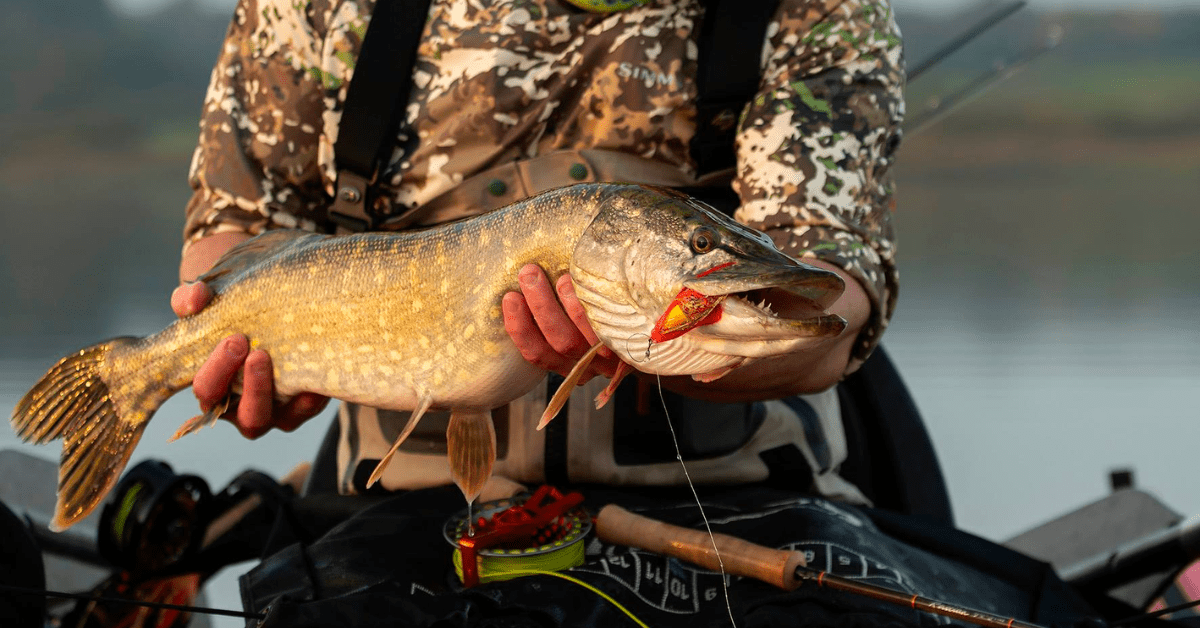 Fly fishing for northern pike has become increasingly popular over the last few years. It gives fly anglers a nice change of pace from chasing trout in smaller streams and rivers and gives them a chance to land a big fish, potentially the fish of a lifetime on the fly.

While pike fishing on the fly may seem intimidating to get into, it is not nearly as complicated as people think. Much of the same gear used for fly fishing for trout or salmon can be used to chase pike. Additionally, many of the same streams and rivers that hold trout can also be home to big pike as well. Throughout this article, we will take a look at where and when to fish for pike and the equipment needed to do so.

Where to Fly Fish for Pike

In what may be considered a bit surprising, northern pike are found in the majority of waters anglers fish. They can be found in lakes, rivers, streams and even larger ponds. Within those bodies of water, pike can be found in a variety of places depending on the time of day. In the lower sunlight hours, mainly dusk and dawn, pike can be found in shallow water chasing minnows, fish and small flies. In the middle of the day, pike are mostly found in deeper water, often around drop-offs and in and around weed edges waiting for smaller fish to pass by.

Pike can live in a variety of locations, but as predatory fish, they prefer spots that allow them to hide. This usually means, rivers with log jams and weed beds, lakes with drop-offs and rock piles and streams with cut banks that provide cover for the pike and allow them to attack unsuspecting prey.

They also like habitat that provides cooler water. Cold water is often more oxygenated water and more oxygenated water provides more terrestrials, nymphs, minnows and other fish for pike. As an apex predator, northern pike will not shy away from an easy meal and the more opportunity for those meals the better, so finding a habitat that provides cover and food will oftentimes produce pike.

Contrary to what many anglers believe, fly fishing for pike does not always require brand new gear. Fly fishers who have chased trout, will be able to use much of that same gear to catch pike. The most basic items needed to chase pike on the fly are waders, a reel, a rod, fly line and a few large flies. A boat is nice to have in certain situations but is not necessary. Trout anglers who have a drift boat can also utilize that for pike fishing as well.

There are a few different schools of thought when picking the right fly rod for pike. In certain areas, pike can grow up to 4-5ft and weigh upwards of 45 pounds. In other areas, pike are smaller and grow between 2-3ft. These are obviously very different size fish and require different size rods. However, most anglers and guides recommend going for a larger rod, rather than being too small.

With that being said, the most common sizes for a pike fly rod is a medium to medium-heavy action 9, 10 or 11 weight rod. If you are fishing for pike in areas that also house musky, lean towards a big rod, like a 10 or 11 weight. If you primarily fish in areas with smaller pike, the 9 weight is the perfect option.

Another factor to consider is what type of habitat you will be fishing in. If you are fishing streams, a larger rod will be tougher to cast into tight areas than the smaller ones. If you are sight fishing big lakes and rivers, smaller rods won’t allow you to reach certain spots with your casts so be sure to factor that in when deciding. However, keep in mind that the larger rods require more effort when casting and can exhaust anglers much quicker than the smaller weight rods so plan your trips accordingly.

When determining which fly line, leader and tippet is best when fly fishing for northern pike, there are a variety of factors that need to be accounted for. Similarly to deciding which rod to use, the location, habitat and size of the fish being targeted are major factors to consider.

When selecting the correct leaders and tippet, remember that northern pike are aggressive predators and as a result, have sharp teeth for attacking smaller fish. With sharp teeth, comes the ability to cut almost all leaders and tippets so having a wire bite leader and tippet is absolutely necessary.

In choosing the proper net, pliers and grips for fishing northern pike, there is a bit more leeway than the other equipment. All that is needed is a net big enough to scoop up big pike and will not be cut by their teeth. In terms of pliers, ones that can remove large pike flies and not be damaged by teeth or being dropped will be perfect. Grips are more of a personal preference as many pike anglers grab the fish by the gills when bringing them into the boat. However, if you would like a pair, make sure they have the ability to hold up to 45 pounds.

Choosing the Right Flies for Pike

Just like any type of fly fishing, choosing the correct fly for catching pike takes research and practice. Pike flies can vary in size, color and material, but the most common ones are large deer hair flies that imitate baitfish. The best way to choose the correct fly for your area is to look at the baitfish in the waters you are fishing. Some areas have more minnows and sunfish available while other bodies of water feature perch as a northern pike’s main prey.

Once you identify the types of baitfish in your local waters, you can begin your fly selection process. Floating lines with topwater flies are extremely effective in many areas, but in certain deep water lakes, sinking lines with flies that imitate larger baitfish are preferred. Research, along with trial and error will help you pick the best fly patterns for your region.

When to Fly Fish For Pike: Seasons

Pike can be caught all throughout the year, but when fly fishing for pike, the best times are late summer through the fall. The cooling temperatures and longer periods of low light lead to more active fish which lead to better chances of landing big pike.

Best Times of Day to Fish for Pike Fishing

Pike can be caught all throughout the day, but the best times are during periods of low light when pike will use the shadows to ambush their prey. At dusk and dawn, northern pike will oftentimes make their way to shallow water, near shore to target unsuspecting baitfish. They will wait among the rocks or the weed beds for passing fish and when one swims lazily by, this is when they will eat. These low light times are great opportunities for anglers with delicate presentations to get a big eat. (see here for our preferred polarized sunglasses for these periods).

Techniques for catching pike on the fly

Catching a pike on the fly is an awesome feeling. In some ways it can be even more rewarding than trout or other fish because of how much work goes into finding the correct gear, the correct line, the correct presentation and the correct fly.

Techniques for catching pike on the fly vary depending on the habitat you are fishing. When sight fishing for pike in shallow water, it is frequently done with floating lines and large topwater patterns. In these cases, casting over shallow weed beds with 4 or 5 quick strips into open water can be extremely effective.

When utilizing sink tip lines casting to breaks in the weed lines can induce strikes. Northern pike will cruise weed edges looking for prey that have left the safety of the weed line. To target these fish, cast your fly few feet into the weeds and use 3 to 4 quick, sporadic strips to get the fly back into open water. Once in that open water, fast strips back to the boat or shoreline can produce an eat.

When fishing with sinking line over drop offs or rock piles, large bait fish flies as well as poppers are very effective. Northern pike will often hide in the shadows, lower in the water column and wait for smaller fish to venture out into the open. The best way to get those pike’s attention is to cast out over the drop off, let your fly fall, then strip back up towards the shallows. Pike will frequently follow those flies up and strike as they are stripped up.

When handling and placing the pike back in the water, the main thing to be aware of are a pikes’ razor sharp teeth. Utilize pliers to remove the fly so you are avoiding the teeth and before taking the picture, utilize grips or grab the fish behind the gill so the mouth is completely out of the way.

After taking the picture or showing off your catch, the next step is releasing the pike back into the water. The best way to do that is to place one hand where the tail meets the body and another underneath the fish. This gives you the most control of the fish and allows you to lower the fish, head first into the water. Once the head is in the water slowly push the fish fully into the water and release your second hand. The pike should swim away quickly shortly after its release.