How to Catch Pike: Top 2023 Tips for Lure Fishing Success 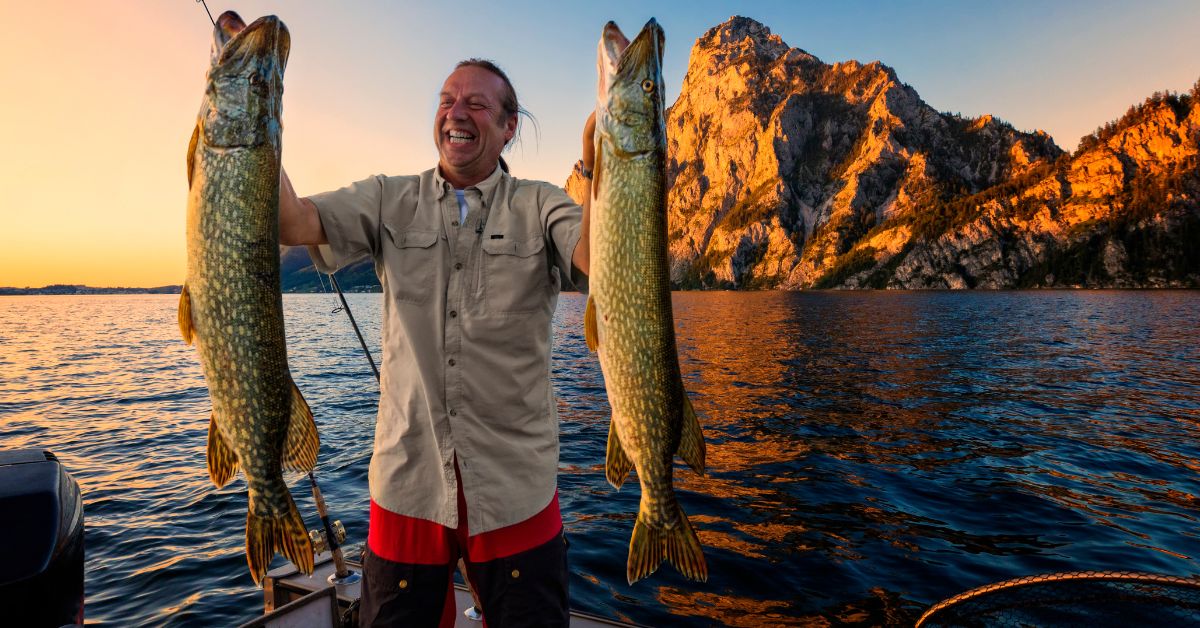 Fishing for pike is awesome, they are super aggressive and almost always willing to eat your lure. If you want to learn how to catch pike more consistently, stick around. In this post, we will take a look at the best gear and methods for catching big pike.

Let’s take a look at not only the gear needed to catch northern pike, but also look at the fish itself, its habits, habitat, and other facts. Having an in-depth knowledge of your target species will only aid you in locating and catching them.

In North America the range extends from Alaska and goes south to encompass the entirety of Canada and the northern half of the United States.

In Europe the range of the pike starts west in the UK and encompasses essentially all of Europe heading east through Siberia and into Eastern Russia to the Pacific coastline.

Northern pike are aggressive predators that will feed on essentially any type of prey that they can fit in their mouths.

The diet of the northern pike includes minnows, small fish like panfish, suckers, juvenile smallmouth bass or any fish small enough and unlucky enough to get too close, frogs, birds such as ducklings, mice, crayfish, insects, and even other juvenile pike.

In Europe and parts of the U.S. and Canada the northern pike is the apex predator in their underwater environments, and are only beaten out by the musky in bodies of water where both co-exist.

The only predator to a mature northern pike in many waters are birds of prey, or humans.

Big pike like to spend their time hunting around submerged weed beds, and edges like drop-offs and weed lines. These areas are perfect for hiding and waiting to ambush prey, and these areas give the northern pike cover.

Areas to target for northern pike

As mentioned above, pike love aquatic vegetation, and while there are times that northern pike will be up in very shallow water, like in the early spring and early fall, the large fish will typically be in moderate to deep water.

If you can find the edges of weed beds that are in 8-10 feet of water, chances are you are in the big fish territory. Any parts of these edges or drop-offs that have points that jut out into deep water, or inside corners, will likely have larger pike that position on these spots to feed.

Mature pike can also be found out and away from structure suspended in the middle of a lakes basin. Typically you will see these fish on sonar “babysitting” below schools of suspended bait fish.

Since hungry pike are willing to eat nearly anything that looks like a meal, this means you don’t have to be too concerned about what presentation to use when they are actively feeding.

When the fish are less active they may show a preference for certain presentations, and this is where experimenting with different lures is important.

For power fishing, it’s hard to beat a spinnerbait, bucktail, or topwater, but in situations where the fish are less active, a slow-moving swimbait, glide bait, or crankbait may be necessary to elicit a strike.

When setting the hook on a pike, you will want to set it relatively hard. Pike have mouths with a ton of bone, and a lack of muscle, meat, or flesh compared to other freshwater fish species.

Ensuring that you have sharpened hooks and getting a solid hookset will ensure that you lose fewer fish due to poor hookups. Pike takes can be pretty spectacular so make sure you are paying attention to your lure at all times.

Now that we have taken a look at some pike fishing facts and tactics, let’s take a look at the gear needed for pike fishing (check here for a comprehensive list of the recommended gear for pike).

A good rod setup for pike should be in the 7’6″ to 8′ range and feature a medium to medium heavy power and fast action, and most anglers today stick with bait casting setups.

If your fishing location features pike that are smaller in size and doesn’t have many pike in the mid-30 to 40-inch range, the same rods you would use for bass will work for pike.

It might be a good idea to have a shorter rod in the 7’6″ range for lures like twitch baits and glide baits, but for most any other lure type, a longer rod will serve you better as the leverage provided for both hook sets and casting distance is better.

Most pike anglers run bait casting rods and reels and for good reason, they are just better at fishing larger lures and are more versatile in many ways for pike.

For most pike lures, a 6.1:1 or similar gear ratio will work well, and reels with this gear ratio can handle a wide variety of lure types and sizes.

You can use either a spinning reel or a baitcasting reel for pike fishing.

Today, most anglers use braided line to fish for species like pike then tie a thick fluorocarbon leader of anywhere from 65 to 80 pounds in strength.

Braided line is incredibly sensitive, and the added fluorocarbon leader will protect you not only from getting bit off due to the northern pikes’ sharp teeth but gives you the added advantage of being very stealthy.

Fluorocarbon line has nearly the same refractive index as water, so when it is submerged it is essentially invisible.

Nets are arguably a necessity for pike fishing. Nets help you secure the fish while protecting them from rough handling, such as flopping on the rough surface of a boat.

Nets also help protect you as an angler from getting hooked while trying to handle an angry and thrashing pike. See here for tips on how to net a fish safely.

Pliers are a necessity and non-negotiable when it comes to pike fishing, and I say this as an angler who has been sent to the emergency room due to trying to unhook a pike without the proper tools. You don’t want to get anywhere near those sharp teeth in a pike’s mouth.

Now that we have talked about the important terminal tackle and tool requirements for pike fishing, let’s look at the lures that excel at catching pike.

Spoons are some of the oldest lures in human history, and trolling spoons made of various materials like ivory or bone go back centuries.

Spoons still work exceptionally well to catch pike to this day, but instead of bone, spoons are made from polished steel, brass, or in some cases even plastic.

They are versatile lures that can be straight retrieved, jigged, or worked in a combination of the two.

Some spoons even feature single hooks with weed guards and can be worked in and around some surprisingly heavy cover including timber.

Swimbaits are all the rage in pike fishing today, with the majority of swimbaits being the soft plastic style with paddle tails that kick and thump when they are retrieved.

These baits have a natural appearance, and the vibration of the paddle tail is significant and can attract big pike from far and wide.

Other swimbaits are jointed and made from hard plastic and have a slow and very natural swimming action that can entice even the most lethargic of pike.

Inline spinners such as bucktails are great search tools to find active pike. You can cast and retrieve these lures fast around pike fishing locations to catch any actively feeding fish, and these lures are quite often the best lure to use.

If you see and contact fish without actually catching them on inline spinners throughout the course of a fishing session, you can then return, knowing where they are, and fish lures like glide baits to entice a strike.

Final Thoughts on How to Fish For Northern Pike

There you have it, everything you could want to know about catching pike and pike fishing, with the right gear and lures, you will have zero issues consistently catching these aggressive predators anywhere that they swim.