The best gear, reviews and advice ... from people who fish

In this article, fishing guide Shawn Chapin takes a look at the eight best pike lures available and what’s the secret behind their success. At the end of this article we will give you some tips on how and where to catch these predators.

Spinnerbaits of all sizes are pike catching machines. The Terminator line of spinnerbaits is no exception and is one of the best out there. You can drag or hop it on the bottom, burn it over weeds, bump it off of logs and stumps and pretty much anything else and not get it snagged up. That’s the beauty of spinnerbaits. The terminator has a specialized head to help with that, it also helps keep your trailer plastic “if you’re using one” from dragging on the bottom. One of the features that really shines is the wire frame, with the terminator’s wire frame having 30% better bend resistance, it’s actually almost flexible and is harder to come out of tune like other spinnerbaits on the market. The blades have beveled edges for extra flash and the skirts are even replaceable.

The Aglia has probably caught more fish than any other lure in the world. The #4 and #5 sized French spinners are perfect for pike, and will certainly catch fish. They come in a plethora of colors and have something for any water condition out there. You can even get naked Aglias without skirts, while being more popular with salmon fisherman, the naked versions will catch pike as well. The Mepps Aglia is the physical representation of the phrase “If it ain’t broke, don’t fix it” and it couldn’t be more true with this lure. The set of six pictured here are all in #4 and #5 size.

Here’s another truly old school lure that still wrecks the lives of pike to this day. Created way back in 1929 the Red Eyed Wiggler has been one of the best pike lures for almost 100 years. It’s distinctive wiggles, rolls and flutters combined with two bright red eyes are absolutely devastating, especially in clear water using the all chrome variant. Featuring a double hook in the front, and a treble in the rear help anglers with great hooking percentages. The wiggler is now also available in 6 different sizes and 20 different hand-painted colors.

The Rapala X-rap is one of the most versatile crankbaits on the market. Fished with a specialist crankbait rod as a twitchbait/jerkbait this thing is absolutely deadly. It has a feather tail on the rear treble for a very lifelike action as well. The “slashbait” action gives the X-rap a darting, hardcutting and aggressive action that is very unique and drives fish crazy. It also has a unique casting system, allowing for extremely long casting distance, along with an internal rattle that calls out to fish and brings them in from the immediate area and in low light conditions. The X-Rap also suspends on the pause with a rolling action, allowing the bait to hang in place without rising on the pause, and the wobble creates for some explosive strikes.

The Lipster is an incredibly realistic shallow water jointed crankbait. 3D scanned from a real roach the realism in this lure is hard to beat when it comes to hard baits. Designed for a stop and go retrieve, it’s perfect for pike, because pike have a tendency to follow, and at times a sudden pause is all that is needed to cause a big pike to strike. This bait is great for trolling as well, and has a deadly roll and side flash even at incredibly slow speeds. Available in 13 cm and 18.2 centimeters, you have two sizes to choose from as well as 5 amazingly well done color patterns.

No pike lure list would be complete if it didn’t have a paddle tail swimbait on it. The Swimmin’ dawg is our pick for the best paddle tail swimbait for catch pike. The Swimmin’ Dawg’s front hook sits further forward than other swimbaits on the market, the reason for this is simple, lures like swimbaits are incredibly realistic and trigger some explosive strikes, with fish like pike and muskies preferring to strike it at the head of the bait to kill it.

The hook sitting farther forward helps with hookups when these head strikes happen, reducing the amount of missed fish. The swimbaits come in two sizes 8” and 11” as well as a ton of colors, 20 in total, with new colors added fairly regularly over time. This is one of the best pike lures overall.

The Rapala Rippin Rap has had a surge in popularity when it comes to catching pike through the ice and in open water. With a lipless and deep belly design, this bait was made to rip, swim and crank. When this bait is ripped vertically it flutters to the bottom thanks to its skinny sided design. With an insanely hard thumping vibrating action and BB rattle chamber, the Rippin Rap will call the pike from far and wide to come and investigate. Great For Stained water, where a particular noise and vibration can sometimes make the difference, but also great for clear water where its shudder action will throw off a ton of flash. Run this thing at any depth, and when you do hook into that giant gator pike have no fear, this thing has fast piercing VMC hooks and that fish isn’t going anywhere!

The Phantom is one of the best glide baits on the market today. It has an amazing gliding action that’s easy to work by giving your rod soft taps in a downward direction while reeling in the slack, making the lure look like a darting baitfish with its “walk the dog” action. It also features a soft plastic curly tail, giving it an added tease to following pike, and flutters in color on the pause and sink. The phantom comes in multiple sizes from 4” 6” to 7.5” in length and 20 different color patterns to choose from.

Pike fishing is relatively easy to learn and be proficient at for fishermen, and can be an absolute blast with some incredible action and powerful strikes. Pike are predators and are extremely opportunistic, eating everything from dead bait rigs through the ice to topwater baits in shallow water, to deep diving crankbaits suspended over incredibly deep water. These reasons are why pike are popular to fish for in the areas they are found, and you can use the same lures you use for other species, like bass or musky.

Where are Pike Found

Pike are naturally found in the northern reaches of the United States due to being a cool water fish, and all throughout Canada all the way up into Alaska. Likewise Pike are also found in Europe as well, where they typically grow to larger sizes than pike in most areas of the United States with the exception of Alaska. From the U.K. to Germany, Sweden, Italy and all the way east in Siberia. The places for pike are numerous and there’s a pretty good chance if you’re close to these areas, you’re close to a pike. If you are a UK or Europe based pike fisher, check out the Pike Zander site for some great articles and Dutch guide Michael Stalenhoef’s site for some pics and video. Pike are related to muskie, it’s no surprise you see some crossover between the lures on this list and those in our best muskie lures article.

When to Fish for Pike

Pike can be caught year round depending on the local fishing regulations. From spring to fall to winter. In Canada and the Northern United States they are very popular to fish for through the ice in the winter months while Ice Fishing. The spring can be exceptionally productive, as usually the pike just finished spawning “they spawn while there is usually still thin ice on the lakes” and are ready to feed heavy to regain the energy they lost spawning. In the Summer months the fishing can be particularly good, with pike inhabiting pretty much all parts of the bodies of water they live in, but if there’s any submergent vegetation, chances are it’s going to be completely loaded with pike. In the winter months all fish slow down and during ice fishing this is no exception. Anglers typically use tip ups with live bait at varying depths, but lures on this list like the Rippin Rap can work as well and be very effective tools to call out to, and catch fish through the ice.

The other thing note for those starting out with pike fishing is that are certainly toothy critters and need to be handled with care. We suggest gripping them by the lip with a Boga Grip or an alternative fish gripper. As with all large sport fish please support them under the stomach (don’t lift them by the grips) and it helps if you use a towel over your hand when doing so to help their post capture recovery.

Pike are typically not very picky, but in this list we have our picks for best pike lures that could make or break your day if they decide to not cooperate. We covered a variety of presentations for you to explore, from spinnerbaits, small bucktails, swimbaits, crankbaits, and lipless crankbaits. All of the lures are dynamite pike whacking machines. So grab or make some baits and get out on the water and start casting, chances are if you’re in pike water it won’t be long until a wily pike snatches on to one of these baits. 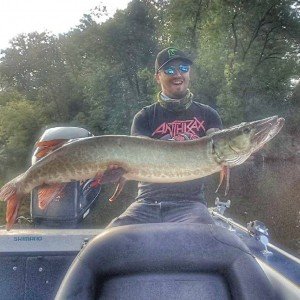 Muskies are a territorial fish, are rare compared to fish densities of other species, and are more likely to investigate and follow your lure to 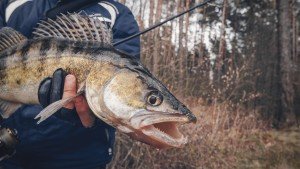 Walleye are one the most popular game species throughout the northern reaches of the United States and Canada. They are known for having a tendency

They are second only to bass as the most popular freshwater sportsfish in the US and renowned for being good eating too. And crappie also