The Most Valuable Rare Antique Fishing Lures? (up to $100K!) 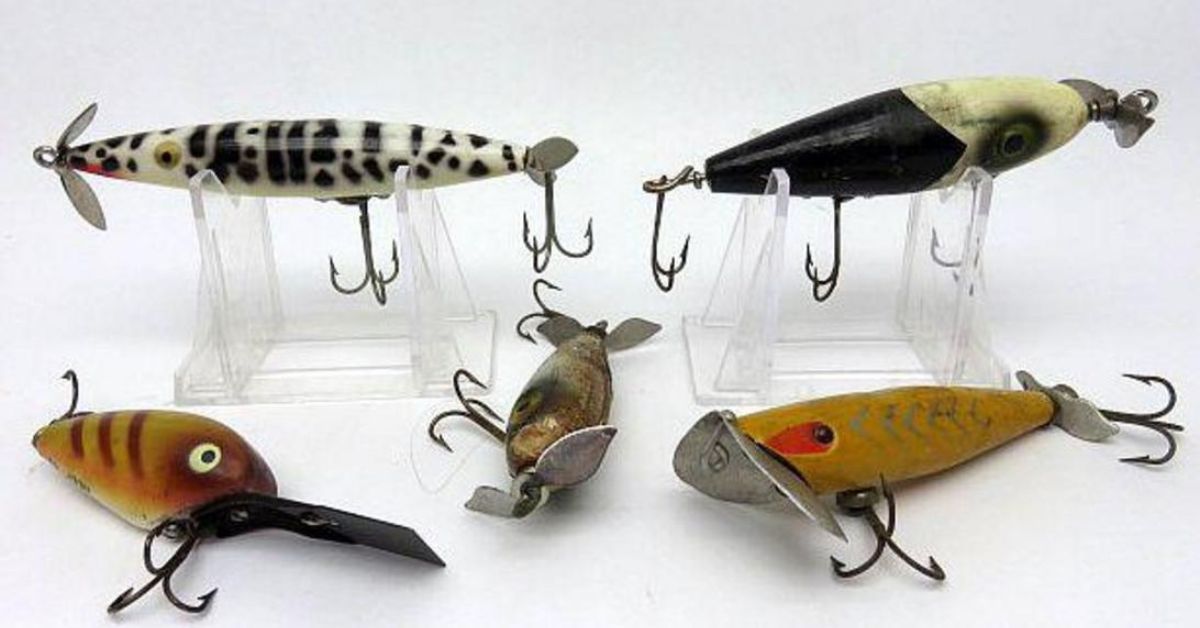 The Most Valuable Rare Antique Fishing Lures? (up to $100K!)

Antique fishing lures can be worth a good amount of money – some have sold for about $100,000.

There are plenty of collectors out there looking to add to their collection, whether they are fairly common antique lures, or the rarest of the rare.

In this post, we will take a look at the most valuable lures out there and talk about their history, and how much they could be worth.

What is the Most Valuable Antique Lure in the World?

The most expensive lure in the world is the giant Copper Haskell Minnow. This lure was patented by Riley Haskell in 1859 and is a prime example of lures used in the very early years of recreational fishing in America.

The Copper Haskell Minnow is a very rare lure, but there is only one known example of the giant copper Haskell minnow size, and this single example, coupled with the fact that all Haskell minnows are very rare, led to the lure selling at auction for $100,000 dollars.

What Other Antique Lures are Highly Valuable?

There are several types of lures that are worth a good chunk of change in the charmer lure line, but the Musky Charmer Minnow is the rarest and most sought after of all charmer lures.

The Musky Charmer Minnow comes in at 5 inches in length, being the largest of all charmer minnows, and there are only a few known to be in existence today.

The paint scheme with stripes on the rear section of the lure is particularly rare, with only one known to exist, and recently, this one-of-a-kind vintage fishing lure sold for $25,000 at auction in 2018.

Heddon has made tons of popular lure designs over a long period of time, and in fact, Heddon still produces some of its classic lure designs to this day.

The Heddon Black Sucker is a fishing lure that is worth quite a bit of money if you manage to get your hands on a quality example.

The Black Sucker is a 6-inch wooden bait with glass eyes, a non-movable intact tail, and a front prop spinner.

The lures typically feature a natural scale paint job and, as with most valuable lures for years passed, are very rare. One of these lures in great condition sold at auction for $19,000 dollars in 2006.

You will see the name Heddon a few times in this list, and that’s because Heddon was one of, if not the, top lure brand in the fishing early recreational fishing industry.

The Mohawk minnow was produced in the early 1900s and features a front and rear propeller arrangement and excellent color patterns.

If this lure comes with the Heddon paperwork and box and is in exquisite condition, you could find yourself selling it at auction for as much as $18,000 dollars, as someone found out when one sold for $18,400 in 2013.

The Wiggletail is a very unusual-looking mechanical vintage lure that makes you scratch your head when you first look at it.

The mechanical tail design certainly makes it stand out among other tackle from the period, and it is a very rare find, with only ten examples known to exist today.

The Shakespeare wooden minnow lure follows the same popular lure design seen used by other lure builders in the early 1900s, with a front and rear propeller blade and a cylindrical body that tapers from head to tail.

The props are different than those found on many other lures from the same period, and are bent backwards at an angle, these propellers are known as A-notch propellers.

If this lure comes with the original box, which in itself is very rare, and if both the lure and the box are in great condition, you could fetch over $18,000 dollars for one of these lures, as some lucky person did in 2012.

What Types of Antique Lure is the Most Valuable?

There are several different types of antique fishing tackle that are worth money, from the copper-built Haskell minnow, the rarest of all old fishing lures, to standard steel lures.

The majority of antique fishing lures that are worth quite a bit are typically made out of wood and are hand-painted, and if the lure and paint condition of the lure is good, chances are you can get a pretty penny for one of these rare lures if you choose to sell one.

What are the Most Expensive Old Lures Made Of?

The Haskell minnow is made of copper, and since these are the rarest of all recreational fishing lures, the chances of finding one are like hitting the jackpot.

Which Companies Made the Most Valuable Old Fishing Lures?

Heddon, Shakespeare, and Creek Chub baits, Pardee, and Pflueger lures are the more commonly found fishing lures, and they were very popular in the early days of recreational fishing.

Heddon is probably the most familiar of all these fishing lure brands, and there are actually quite a few of them floating around, but not all of them are worth a substantial amount.

Where Can You Buy and Sell Vintage Fishing Lures

If you want to collect and potentially sell lures to collectors, a good place to start looking would be online, such as on eBay or in Facebook groups.

If you live in an area with a very prominent fishing culture, like the upper Midwest and Great Lakes region, start going to flea markets and rummage sales during the spring and summer, chances are someone has some old fishing lures sitting on a table for a few bucks, and that is where I have gotten many of mine.

This is a hard question to ask, as many of the antique fishing lures you find are going to be somewhat common. For instance, I have a Heddon Dingbat sitting on my computer desk that is in great condition, but it features the most common paint job of the type, meaning it is only worth about 30 dollars.

If you happen to find one of the rare ones on this list, along with others not listed, they can be a good investment. There isn’t much information out there on how an antique fishing lure appreciates over time, so if you don’t want to keep and old fishing lure as a collectible, you’re better off selling it at auction.