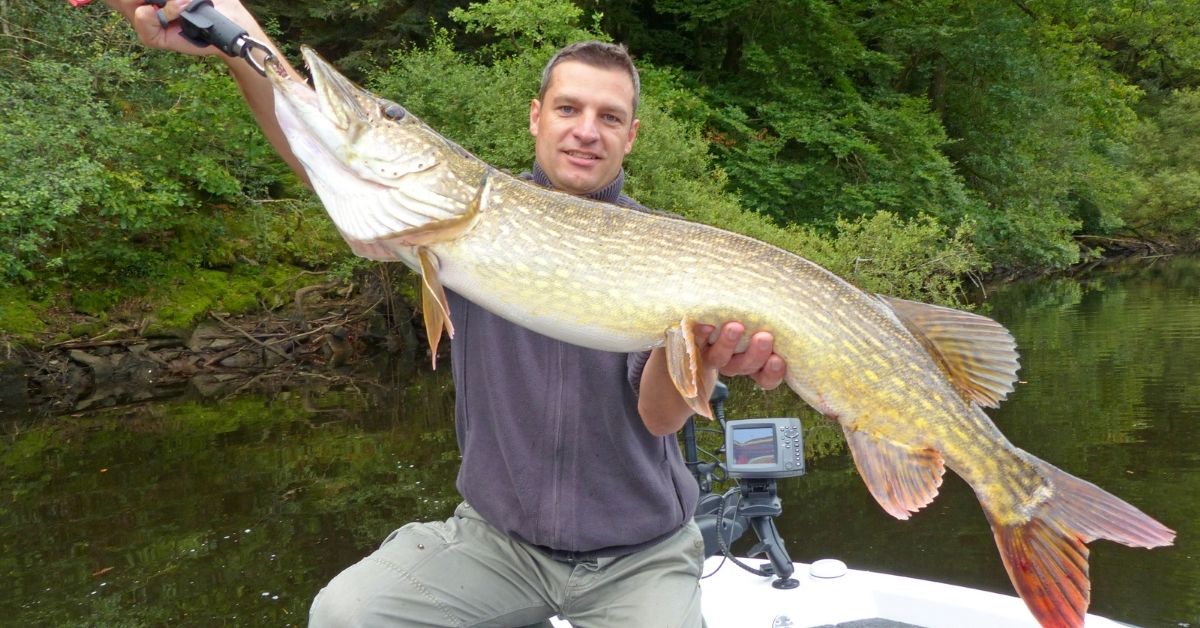 The northern pike is one of the most popular freshwater species among anglers on the planet. If you are just getting into pike fishing, or if you’re looking to expand your fishing gear for the species, stick around. In this post, we will look at essential items for the ultimate pike fishing gear list.

A medium-heavy action rod that is 7′ to 8′ in length is a great start for pike fishing, along with a low-profile reel that is capable of retrieving moderately sized lures from 6-8 inches.

Like with many game fish species, it’s hard to pick one rod and reel setup to excel when using every lure type and presentation.

Shorter rods in the 7-foot range are great for glide baits and jerk baits, while 8-foot rods work better for using top water lures, swimbaits, bucktails, spinnerbaits, and other lures types, but you can get away using all lure types with an 8-foot rod.

Reels are also like rods, in that some excel at certain presentations. Higher gear ratios are preferred for lures like gliders, crankbaits, and jerkbaits, as they can rapidly pick up the slack when creating pauses or cadences.

Reels with a lower gear ratio are great for larger and heavier lures, like big swimbaits and pull baits, these lures typically run in the 10-14 inch range.

Braid is the most effective and commonly used line used among pike anglers. Braid offers exceptional abrasion resistance and strength, at the cost of visibility, which is an issue that is easily overcome.

If you fish on bodies of water with pike that has a low average size, fluorocarbon lines can work just fine, though we recommend using a 20-pound test line with a thicker fluorocarbon or nylon/steel leader to be on the safe side.

Leaders are essential for pike fishing, as the fish have extremely sharp teeth that can easily cut through lines, even 80-pound fishing braid.

Most leaders used today are fluorocarbon-based, and are virtually invisible underwater. If you plan on using fluorocarbon leaders, you should use a leader that is at least 65 pound test to ensure it doesn’t get sheared off by a big hungry pike.

You can use steel leaders or nylon-coated leaders as well, and straight wire leaders are great when using lures like glide baits and jerkbaits.

The pound test of steel leaders can be less than with fluorocarbon, but overkill is always encouraged.

There are a wide variety of lures that work for catching pike. Pike aren’t fussy, and if it looks like food they will attempt to eat it.

Let’s break down the most commonly used lures in the pike fishing world.

Swimbaits have become incredibly popular for pike fishing. The swimbait started in Europe, but is now gaining serious traction in the United States and Canada for not only pike, but muskies too.

Most of the swimbaits used today are the paddle tail variety, with a paddle that kicks and rotates, simulating a swimming fish, and producing a ton of thumping and vibration.

Some swimbaits are segmented or jointed, like the Savage 3-D trout, and instead of a paddling of kicking action have a more subtle swimming action that looks incredibly realistic.

Swimbaits can be both hard body or soft body designs, and there are even hybrid designs that blend the two, typically having replaceable soft plastic tail sections.

These lure are very common among pike anglers, and are very effective at covering large areas of water quickly, making them one of the best search lures ever.

Spinnerbaits work great when working around cover and vegetation due to the low chances of snags due to their design, while traditional bucktails are great for “burning” or retrieving at high speeds above and around weed beds.

These lures can be worked from a slow crawl to high speeds, and at virtually any depth.

There isn’t a predatory fish on the planet that won’t eat a jig, and pike is no exception.

Jigs come in different weights and sizes, and can be coupled with both live bait and soft plastics.

They can be straight retrieved like a bucktail or swimbait, worked around heavy cover, or jigged off the bottom.

Due to the wide variety of jig designs and soft plastics/live bait you can use with them, they are one of the most versatile lures out there.

Jerkbaits can be broken down into two subcategories, gliders and jerkbaits.

Gliders have a zig-zag action that makes the lures dart at sharp angles to the left and right, giving the impression of a fleeing baitfish, and in the right situations, these lures can be devastating.

Jerkbaits in the pike and musky world typically consist of rise and dive style lures, where sharp taps or snaps of the lure will make it dive sharply and rise slowly, giving the impression of a wounded or dying baitfish.

While gliders are great when worked above structure or vegetation, they are susceptible to snagging or collecting vegetation on their hooks, and any added weight or drag will completely ruin the action of the lure.

Rise and dive jerkbaits, while having the capacity to get snagged on branches, can still collect vegetation on the hooks and still have action, and anglers and snap their line and lures with a fast and sharp jerk of their rods which will in most cases shake off any weeds, making them great for working around cover.

Soft plastics come in countless designs, shapes, colors, and sizes, and are a great tool for catching pike.

The most common forms of soft plastics are paddletails, like the swimbaits we mentioned earlier, “flukes” or minnow imitations, curly tail or “grub” style plastics that are typically used on a jig head or as a bucktail trailer, and creature designs that imitate salamanders and other creatures, frogs, and more.

We could spend a long time talking about all the different types of soft plastic, so just know that the ones mentioned all have a time and place on the water for pike.

Pike are very aggressive fish, and this means they are more than willing to eat a topwater lure presentation.

The most popular topwater lures have a prop that makes a “plopping” sound and spits a ton of water around, giving the impression of a terrestrial animal swimming, a duckling, or fleeing fish. These props come in many different shapes and sizes.

Another popular type of topwater lure is ones that are essentially the same as glide baits that work on the surface and imitate fleeing baitfish with a zig-zag action.

Fly fishing for pike has become very popular, and the gear typically consists of 9-foot fly rods with a weight of 8 or more and corresponding sized fly reels.

The flies are anywhere from 4 to 8 inches typically and imitate baitfish very well.

Release tools like pairs of pliers of different sizes are also essential and non-negotiable when it comes to musky gear.

You should have a selection of needle-nose pliers of varying lengths, a quality bolt or hook cutters to cut out any severe or harmful hook-ups, and fish-friendly jaw spreaders with rubber ends to protect the mouth of the pike.

Gloves are a newer development for pike and musky anglers, and there are now thin-skinned but protective gloves to protect your hands from the razor-sharp teeth of a pike or musky.

These can also help protect you from getting a hook in your hand depending on the type.

Many anglers don’t use gloves due to having experience in handling the fish, but if you are more comfortable using them, then by all means do so.

Nets are very helpful in securing and safely unhooking pike.

Pike and musky anglers use nets with deep bags that allow you to keep the fish in the water alongside the boat, this essentially makes them a livewell for the fish, and while they are in the net you can work on unhooking the fish, and then safely release them.

There you have it, our pike fishing gear list. If you are new to pike fishing than everything we mentioned in this post will serve you well in not only catching northern pike, but also when it comes to your safety, and successfully unhooking and releasing the fish.