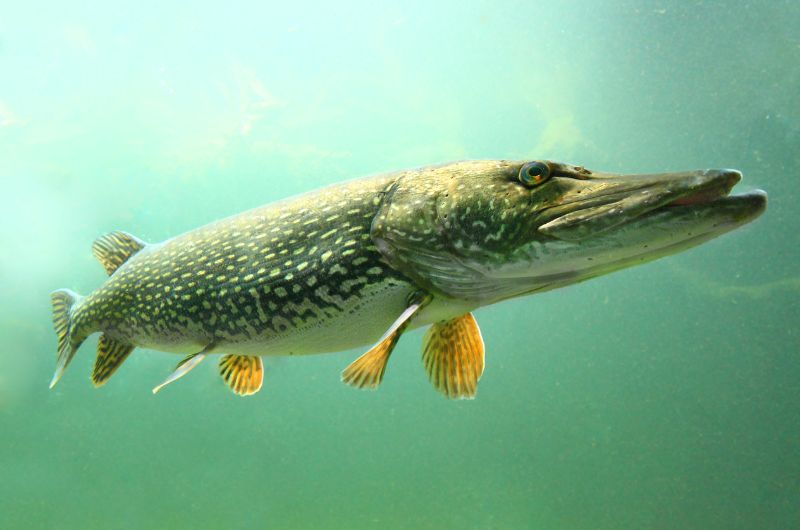 The largest ever northern pike caught by an angler weighed in at 55 pounds 1 ounce and was taken in Germany in 1986 by angler Lothar Louis.

In this article though, we look at the range of northern pike fishing records according to the International Game Fishing Association (IGFA). The fish in these records are truly impressive and are some of the largest specimens ever caught.

All the way back on the 16th of October 1986, angler Lothar Louis was on a fishing trip in the Lake of Grefeern, Germany when he landed the IGFA world record for northern pike. The fish in question weighed in at 55 pounds 1 ounce and was over 53 inches long.

Lothar was actually targeting carp and roach when he landed his world record pike. However, before he set about his business targeting these fish, he always made a few casts with his Cormoran rod in the hope he might land himself a pike before he got his fishing trip underway properly.

After Lothar made his third cast of the day, he felt the unmistakable bite of a monster pike on his line. This fish was so big that it wouldn’t fit in a net and, as he was worried he was going to lose this once-in-a-lifetime fish, Lothar actually grabbed the fish by hand which resulted in him getting bitten in the process.

The excitement and adrenaline racing through the angler’s body was enough to mask the pain long enough for him to successfully land the fish and fully appreciate the truly giant pike he had been fighting with.

If the story of this world record pike wasn’t enough to show how big this fish actually was, even today, more than 30 years later, it is still the biggest pike ever caught and, despite the popularity of northern pike fishing in Europe and North America, no one has been able to beat this record fish for a long time.

At the time of his record-breaking catch, Lothar was using a Cormoran rod, Mitchell 4450 reel, and an Unyl line.

On the 23rd of September 2021, Italian angler Michelangelo Schenone was fly fishing in Lake Maggiore, Italy when he caught the biggest northern pike he had ever seen. It actually turned out to be the biggest pike anyone had ever seen in terms of length as it measured in at an astonishing 48.82 inches (124cm).

Michelangelo was using a Strike Pro – The Hamer rod, an Abu Garcia C3 5501 reel, and a Power Pro Braid line. He fooled the large pike with a Savage Gear burbot lure and after he and his captain, Matteo De Santis, had weighed the fish (and took some photographs), it was released back into the water ready to be caught again in the future by another lucky angler.

See also: How to Catch Northern Pike on the Fly

There is also a story of a northern pike being caught in Cedar Lake which was estimated to weigh more than 50 pounds and around 70 inches in length.

The fish in question was eaten by the angler who caught it and their family so no official record documentation was submitted. If the estimates were correct though, this pike could have been a potential challenger to the current IGFA world record let alone smashing the Canadian record.

Unfortunately, with the proof of this catch being eaten, it is not a record fish despite its estimated size and weight.

On April 1st, 2016, experienced angler Fredrik Johansson landed a pike that broke the previous Swedish record by more than four pounds. The record had stood for 17 years with many anglers trying and failing, to get anywhere close to breaking it.

On his three-day fishing trip, Fredrik was finally able to catch the record pike he had been so desperate to find. It took until the third and final day of his trolling campaign on lake Vättern near Askersund for him to catch the large pike but once it had bitten onto a side planer trolled Zalt, the record was on its way to being broken.

The fish didn’t put up too much of a fight so after a small battle, it was weighed and its record-breaking weight was revealed as 46 pounds 7 ounces. In addition to its hefty weight, the pike measured in at 50 inches (128 cm) and had a girth of almost 28 inches (70 cm).

The Largest Pike Caught in the US

On September 15th, 1940, Peter Dubuc was fishing in Great Sacandaga Lake. Peter was a keen pike fisherman and regularly targeted the fish.

The pike Peter caught on this day though was the biggest one he had caught. It weighed in at 46 pounds 2 ounces and was 52 and a half inches long and had a girth of 25 inches.

It might have taken Peter over an hour of fighting to finally land this giant fish but, seeing as his record still stands today, it appears to have been worth it.

More than 80 years later, it is still the largest pike caught in the US.

Some Large State Records for Pike

Alaska is home to some truly big northern pike. The Alaska state record is currently held by angler Jack Wagner for the pike he caught in the Innoko River back in 1991. This northern pike weighed in at an impressive 38 pounds 8 ounces and has been unbeatable for a long time now.

In Colorado, angler Tim Bone was fishing in Stagecoach Reservoir when he caught the biggest northern pike ever seen in the state in terms of weight. Tim’s monster pike weighed in at 30 pounds 11 ounces.

Also in Colorado, there is a state record for the largest northern pike in terms of length, and that is currently held by Dennis Bruce for the 48-inch pike he caught in Navajo Lake.

In 2010 angler Kim Fleming was fishing in Idaho when she landed the new state record for northern pike. The fish she caught weighed in at just over 40 pounds. Any pike above 40 pounds has to be considered a monster fish and this one was big enough to set the new Idaho state record.

In Michigan, the state record pike weighs in at 39 pounds and was caught in Dodge Lake back in 1969. What makes this state record interesting (and highly impressive) is that the giant pike was actually caught by spearfishing rather than by using a conventional fishing rod. In some states, spearfishing isn’t included in the record books but it certainly is in Michigan which is why this 39-pound pike is still the record-holder to this day.

If we are considering any pike over 40 pounds to be a monster, then the Minnesota state record northern pike is a true monster fish. It has been the title holder since 1929 and is showing no signs of giving up the title any time soon. At 45 pounds 12 ounces, the pike caught in Basswood Lake looks like it will take a long time for anyone to get close to.

The state of Wisconsin has some great fishing spots and the one at Lake Puckaway was where angler J.A. Rahn caught the state record northern pike back in 1952. The fish weighed in at 38 pounds and has cemented its place as the biggest northern pike caught in Wisconsin to this day.