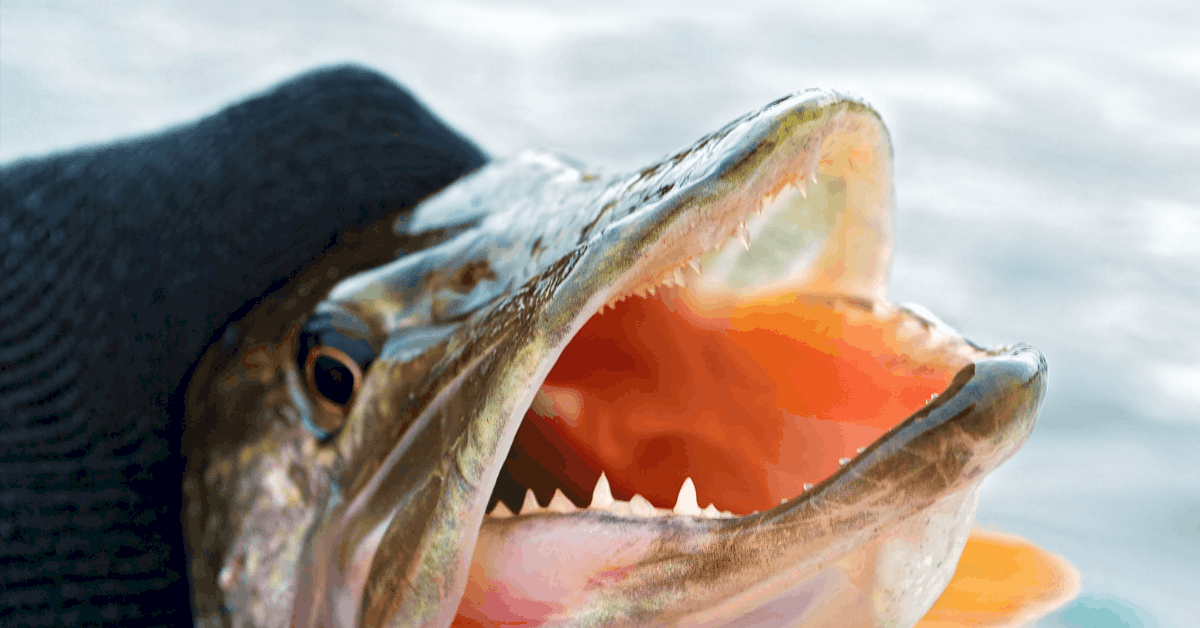 Northern pike along with all of the fish in the Esox genus such as muskellunge and pickerel have needle-like razor-sharp teeth which are used to catch their prey. Let’s take a deeper look at the northern pike and their fearsome mouth filled with tiny daggers.

Northern pike have large fang-like teeth on both the upper and lower jawline, as well as smaller teeth covering the tongue and mouth roof. Pike also has what many anglers call “gill rakers” which are teeth set far back on the jaw, and when holding fish by the gill plate anglers run a risk of the fish writhing and flexing which will cause their teeth to “rake” the fingers or knuckles.

Northern pike teeth along with other species in the Esox genus are angled rearwards, this is to ensure once the prey is caught it becomes trapped and can only be release from the grip of the jaws by moving inwards towards the throat.

Northern Pike also have very powerful jaws for their size to work together with these rearward-facing mini knife blades. Once clamped down on the unlucky prey fish, squirrel, duckling, or any other small animal unfortunate enough to cross a hungry pikes’ path there is virtually no escape.

How Many Teeth Do Pike Have?

How many teeth does pike have? Well, if we were to count all the teeth in a northern pikes’ mouth including the longer edge teeth and the small teeth on the tongue and roof of the mouth, they would have anywhere from 300 to 700 teeth!

That is a ton of teeth and anything that ventures into that mouth full of sharp objects, whether it be a prey animal or not-so-smart anglers’ hand, they will quickly find out what it’s like to be in a cheese shredder.

Do Northern Pike Shed Their Teeth?

Many anglers have questioned whether northern pike lose their teeth, and many more have said that pike shed their teeth, and this train of thought goes back a very, very long time. Many anglers also say that this teeth shedding occurs in the winter, and may be the reason why pike aren’t as aggressive or are not caught as often as normal.

But we now know that this is not true, and is indeed a myth. Pike do not shed their teeth but will lose or damage them when chomping down on a particularly tough prey animal, or on a hard fishing lure, but there is no evidence that they lose their teeth regularly.

This lack of action with anglers during the winter can most likely be contributed to other factors, such as shallow weed growth dying which makes the fish move to deep water structure, or the lack of metabolism and activity due to colder water temperatures in the winter months.

If you read this post, you can henceforth answer the question to fellow anglers on whether pike shed their teeth.

There have been instances of humans getting the unfortunate northern pike bite.  Sometimes these bits are to the hand and are caused by the ineptitude of the angler and there are quite a few videos on places like YouTube that show the unfortunate and painful encounters taking place, like people dangling a dead prey fish in the water, and the pike attacking the hand that is feeding them with their sharp teeth.

Other occurrences are situations like pike attacking swimmers, where swimmers get bit in the foot, or someone dangling and splashing their toes in the water off the side of a boat or dock while a pike hones in on splashing noises and movement which makes it think its a snack, consequently attacking it with their sharp teeth. While these incidents do occur, they are overall very rare.

Pike do not seek out humans and attack them for any reason other than mistaking a body part for small prey. Northern pike have a brain the size of a pea and are honing in on peoples’ appendages out of a pure instinctual drive thinking they are wounded fish or other animals.

Can a Pike Bite Cause Major Damage?

Pike can cause damage, but I’m not so sure that we could call it major. A pike will not sheer off your fingers, toes, arms, or legs, but it will make very clean surgical cuts that can run pretty deep.

Depending on the severity you will most likely require a hospital visit and stitches, or you may get away with only some band-aids or some gauze pads.

I have personally fished for pike and musky my entire life, and have been caught by teeth many times. In many cases you might not even realize you have been cut right away due to the sharp clean cuts that occur, other times you will definitely feel pain right away, it all depends on how deep and badly you were cut.

The worst instance I have seen was my father getting the tooth of a 45-inch musky slicing his hand from the side of the thumb near the knuckle all the way down to nearly his wrist, and this particularly bad slice required 19 stitches.

How can you protect yourself from pike teeth?

Knowing how to properly handle a northern pike is the easiest way to avoid getting cut by them. You can also wear a glove when grabbing them with a gill plate hold to protect them from the gill rakers. Gloves like Mechanix gloves are great for this, and there are even fishing companies that make thin tooth-proof gloves specifically for the task.

How to handle a Northern Pike

There are a few different ways to properly handle a northern pike, not just for your safety in avoiding a pike’s razor-sharp teeth, but for that of the fish as well when northern pike fishing.

We already mentioned using a glove earlier, but other tools such as long needle-nose pliers, a hook-out, and fish-friendly jaw spreader, a landing net, and a hook cutter are also must-have tools for anglers who are fishing for predatory fish like northern pike.

When handling the fish it should be put in a landing net if possible, as performing a hand release increases your risk drastically, especially if you are inexperienced. If you have the fish in a net, your next goal is to unhook the fish, as not only are fish teeth dangerous, but hooks being exposed and in the mouth of a trashing northern pike mean that you could easily get hooked and pinned in an angry writhing fish.

Once the hook is removed safely, you can either grab the fish by the gill plate while supporting the fish with your other hand by the middle of the body to prevent damaging its spine and internal organs, or you can grab it by the tail while also supporting the body and holding it horizontally.

Holding a pike by the gills or Boga grip vertically is discouraged due to the very high risk of severely injuring the fish. Holding a northern pike vertically can damage its’ spine, or severely damage its internal organ by causing weight and gravity to displace them and could lead to the death of the fish after release.

Can Pike Bite Through Mono, Flouro, or Braided line?

Yes to all of the above. Northern pike can surely cut through all line types and the only thing that helps prevent this when pike fishing is to use a leader.

Many anglers when pike fishing will use leaders made from very thick fluorocarbon lines, monofilament lines, or steel leaders like sevenstrand. Braided line is incredibly strong in terms of tensile strength, but the line is thin and when it comes to the shearing power of northern pike teeth, it can easily be frayed or your lures could be cut off entirely.

Northern Pike is incredibly accurate when it comes to catching prey because they have to be, but even they aren’t perfect precision fish catching machines, and in many cases will misjudge the lead on a moving target and clamp down on your fishing line in front of the lure, this along with engulfing the entire lure up to the line is the reason why leaders are a requirement while pike fishing.

A pike’s teeth and the rare encounter of a pike biting a person should not prevent people from fishing them.  When handled properly, the risk of you being injured by a pike’s mouth and pike teeth is very low. Use your brain and the proper tools, and be sure to properly handle the fish for both of your safety and everything should work out just fine.