Fishing Reel Types Explained: How to Choose the Right Reel 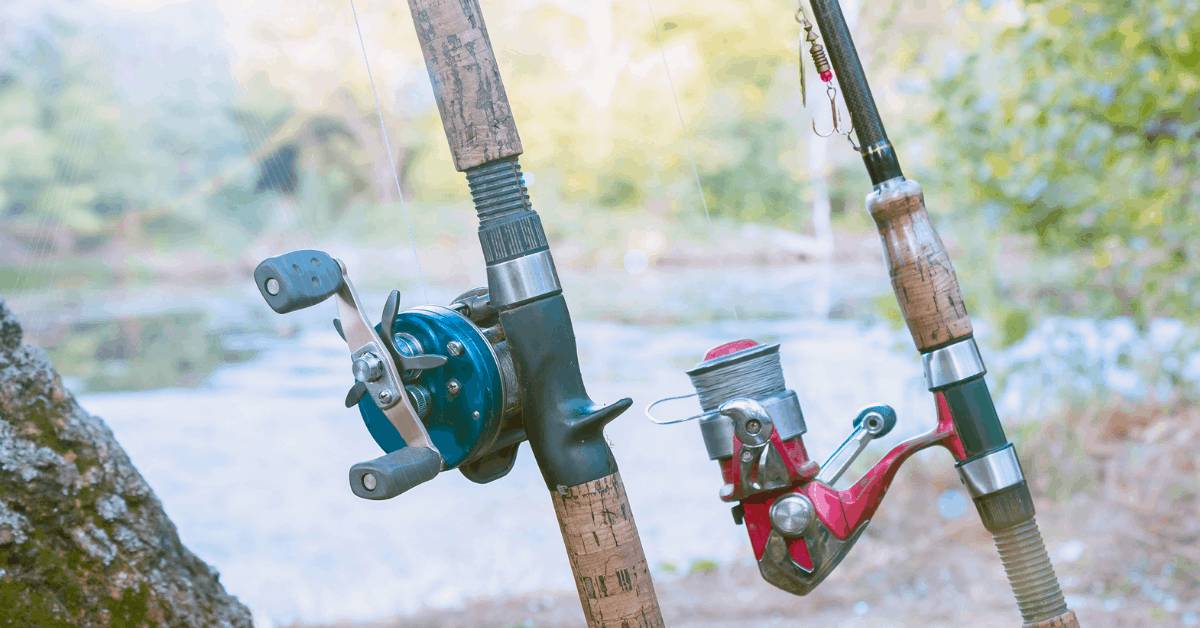 Fishing Reel Types Explained: How to Choose the Right Reel

In this article where are going to explain the four main types of fishing reel, their pros and cons and what they are best used for.

There are four main types of reel used for most fishing situations: spinning reels, baitcasting reels, spincast reels and fly fishing reels. We are going to explain the basics of each of these reel types and their advantages and disadvantages.

Spinning reels are the most popular choice of reel among anglers.

Spinning reels have a stationary (when winding) spool with a rotating bail arm that lays the line on to the spool as you crank the handle.

The drag on the reel is adjusted with a knob at the front of the spool that applies braking when the spool begins to rotate to release line. The more tension you wind on with the knob the more force is required to release fishing line.

Spinning reels are easy to use – just pinch the line, flip the bail, cast and release. They are also durable, dependable and don’t require much maintenance.

Spinning reels come in a range of sizes from ultralight 1000 size models to 10,000 plus game reels. See our article on spinning reel sizes for a full explanation along with tips on what sized reel suits for particular fish species.

A baitcasting reel is a great weapon in the hands of a skilled angler. He or she can punch out quick, accurate casts with one hand and stop the lure right on target to fish a variety of structure. And thanks to the baitcaster’s cranking power and strong drag the fish are less likely to get away.

With a baitcasting reel the spool lies on an axis perpendicular to the fishing rod so that when you reel it the rotating spool picks up the line directly. There is a line guide that slides back and forth to ensure even distribution of the line on the spool of the baitcast reel.

As well as being more accurate, if you are casting heavier lures, casting reels can also make longer casts than spinning reels.

The advent of the low-profile baitcaster has made this type of reel a popular choice for freshwater gamefish as well as in the salt.

Baitcasting reels come in a variety of sixes from ultralight models suitable for stream fishing right up to surf reels and overhead big game reels.

The main drawback to baitcasting reels is they are a little harder to operate than a spinning reel and are suited to experienced anglers. If you don’t have the right technique you will get bird’s nests (tangles) due to spool overrun even with the best mechanical or magnetic braking systems.

The casting technique with a baitcaster involves using your casting hand thumb on the spool and releasing it during the cast but keeping it close to the spool to apply a light touch at the end of the cast to stop the spool (which is spinning rapidly at this time) to overrun when the lure has touched down. That’s what generates the infamous bird’s nest.

Spincast fishing reels are cheap, effective and easy to use for chasing panfish such as crappie and bluegill and smaller game fish such as trout. They are a great option for kids or beginners getting into fishing.

Like a spinning reel, a spincast reel has a spool that rotates on an axis that is parallel to the fishing rod. But unlike the open faced spinning reel, it has a cover that slips over the spool and no bail arm.

To release the line when casting the spincast reel has a button at the base of the reel (although some have a lever at the front). See here for our top picks for trigger spin reels.

They can be cast one hand like a baitcaster and are relatively simple to operate with no risk of overruns.

While cheap and easy to use, spincast reels are not great for chasing fish that can pull some line and won’t pack enough punch for bass fishing, larger trout and walleye or another larger than this.

Fly reels are simple larger-arbor lightweight reels that store the fly line used by fly fishers. They are mostly made of extruded aluminum and have various types of drag systems.

There is no gearing a fly fishing reel and the reel handle is attached straight to the spool, which sits on an axle perpendicular to the fly rod. Therefore for faster winding fly fishing reels, you have to select a large arbor.

Having a smooth drag can be quite important on fly reels when targeting serious game fish as they are going to strip line off your reel as you fight to keep the relatively small tippet used in fly fishing from breaking. Various cork, felt and synthetic materials are used in fly reel drags to provide this braking effect and fly fishers also use their long fly rods as well as fly fishing reels to act as a shock absorber.

Fly fishing reels are spooled with braided fishing line called backing first with the fly line attached to this. That provides additional capacity to allow the fish to run. Fly fishermen know they are on to a decent fish when it has taken them into the backing of their fly reel.

For info on how to spool a fly reel check out this video below.

Other types of fishing reel

There are a couple of other types of fishing reel that are used and are worth discussing.

A kind of supersized variant of the baitcaster is the overhead type reel used in big game fishing. This type of trolling reel is not used for casting – rather the lure is hung out the back of the moving boat to tempt large game fish. These offshore reels have a high fishing line capacity and low gearing to tip the scales in the angler’s favour in a drawn out fight with a big tuna or marlin or other game fish.

There are numerous topics to consider when it comes to fishing reels including maintenance, repair, brands, how to use them and spool them with line.

Check below for some more relevant articles:

At Tackle Village, we are always trying new gear and swapping thoughts about different reel brands. We’ve published a lot of content on the leading reel brands that you can access below.

We hope this information helps you choose between a spinning reel, casting reel, fly fishing reel and a spincast reel. Many experienced anglers will own one of each of these reel types to cater for the full range of fishing options.

As we said, the spinning reel really is the workhorse of the recreational fishing world and is a great reel for a wide variety of fishing situations.

Baitcasting reels are a better choice in some of the situations described. In the right hands, a baitcasting reel can be used to make long, accurate casts with a variety of different types of lure.

A baitcasting reel also has the cranking power to wind a stubborn fish out of heavy structure. And on the other hand, the new generation of high speed baitcasting reels can be used effectively for working lures such as jerkbaits and jigs that benefit from the ability to crank quickly or wind up slack. This kind of baitcasting reel has a gear ratio equal to or greater than the faster spinning reel.