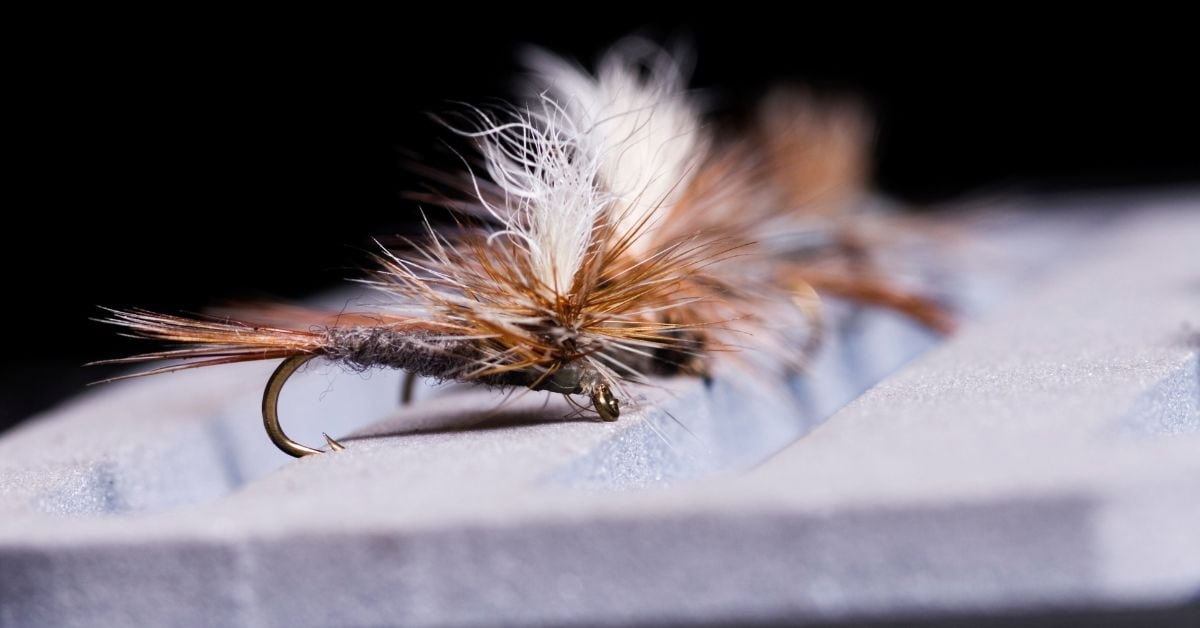 Fly fishing for brown trout is where fly fishing began and it remains the essence of the sport.

Our perception of the best flies for brown trout have changed over the years with parachute flies and terrestrial flies preferred over the conventionally hackled patterns of yesteryear.

I’ve put together what I think are the top 21 brown trout flies across the three main categories of trout flies: dry fly (imitative and terrestrial), nymphs and streamers.

It’s really important to note these a sample list and there will ALWAYS be local flies that perform really well in your area because they imitate creatures found there.

You gotta match the hatch when trout fishing – if your river has a caenid hatch, hitting it with a #12 Adams isn’t going to get it done.

Above all, this is a good list of solid patterns that will work in pretty much any brown trout water across the world.

Nothing beats a dry fly eat. Those jaws come up through the surface of the water and slurp down your mayfly pattern and it’s “Fish On!”. I’ve put together my five favorite dry fly patterns for trout. These dry flies cover mayfly, caddis, stoneflies and other hatching insects (I’ve saved a special category for terrestrial patterns).

The Parachute Adams is a classic mayfly pattern that is simple, easy to tie and trout find irresistible across the world. I’ve caught brown trout on this fly anywhere from New Zealand to Japan. Fished in sizes #12 to #16 depending on the size of the local mayfly species, this fly will hook fish. The white post of the parachute style means it remains visible even in bubbly runs and you can customise this by tying it (or buying it) with a fluoro orange or green post for added visibility (here are my tying instructions for the Parachute Adams). I even tie them with black posts for fishing in glassed off water on dusk. The black stands out against the silver sheen on the water.

Most people reach for the Elk Hair Caddis as their go-to pattern when there is a caddis hatch taking place, but I am more sold on the X-caddis with its trailing zelon shuck. The shuck – just added as a tail – allows you to cover both the dun and emerger phases with the one fly effectively hedging your bets. It has a deer or elk hair overwing like the Elk Hair Caddis, but no wire rib. It’s quick and easy to tie and a really versatile caddis pattern that catches fish at most stages of the caddis hatch.

This a great pattern for brown trout fishing. It’s not the most precise imitation, but the color and the orange accent near the hook bend, along with the little puff of CDC, make this a real fish attractor. The fly was originally created to imitate the stonefly of the same name in US streams, but it has found success around the world as an attractor pattern.

The F-Fly has been around for decades – maybe centuries – and remains one of the most underrated dry patterns around. I tie it with hare’s ear dubbing for the body to imitate mayfly hatches and caddis, and in dark seal’s fur to imitate termites. These flies work best tied small #14 to #18. One of the secrets to the F-Fly’s success with brown trout is the CDC wing – trout just love CDC on a fly and I am hard pressed to think of a CDC pattern that doesn’t just slay brown trout. Just remember to rejuvenate this fly – and all CDC patters – with a dry shake style floatant rather than a gel. It is also a quick two-minute tie if you follow these instructions.

Nymphs – whether fished with a strike indicator, Euro style or as part of a dry dropper rig – are probably the most reliable well to catch trout.

Wet fly fishing is my go to method early in the season and nymphing is a big part of that.

Here are my go-to nymphs to catch brown trout in pretty much any situation.

Trout flies don’t come much more simple or effective than the pheasant tail nymph and this fly is used effectively to catch trout in wide range of regions and rivers.

The pheasant tail fibres in the tail create great movement and also create a slimline body. A bead head with a few crystal flash or tinsel fibres (in the flashback version) create some bling, and a peacock herl thorax rounds out a fly that catches fish in most situations. The wire ribbing ensures durability. Here are my tying instructions for the pheasant tail nymph.

Even simpler than the pheasant tail, the Glister Nymph is just a hook dubbed with a buggy synthetic dubbing called Glister. I use it in green and dark brown to imitate both mayfly and caddis nymphs and find it effective in catching trout in a range of different regions and rivers. Tie it as a bead head or an unweighted nymph.

Another classic nymph fly pattern, the Gold Ribbed Hares Ear is a little bulkier in profile and lighter in shade than the first two nymphs. It’s a proven fish catcher.

When you need a nymph to sink fast through the water column and start bumping against the bottom, there are few better choices than a bead-head Copper John with it’s body made from wire wraps. It’s a great fly for fishing fast runs where you need to get down deep quickly.

With this pick I am highlight a category of bead head nymphs rather than a particular pattern – well two categories if we are being particular. Euro style nymphs such as perdigons, tactical tags and hot-head pheasant tails are great flies for when you want to stand out from the naturals. Far from being deterred by these bright pink or orange hot spot tails or collars, brown trout are often drawn to these slightly lurid creations. True Euro style version of these flies are tied on jig hooks with jig compatible bead heads.

I am not a big streamer guy – I much prefer the visual element of dry fly fishing. But I hate blanking and if the situation calls for streamers or nothing, I will definitely fish them and the truth is the are among the best flies for brown trout of above average size.

Here are the go-to streamers I like to use.

Arguably the most famous streamer pattern for trout of all time, the Woolly Bugger has accounted for perhaps more brown trout than any other streamer pattern. It can be tied in some many different colors and in so many ways (weighted, unweighted, tungsten weighted) it is a versatile streamer pattern for brown trout. Fly fishing with a woolly bugger is almost always a sound choice and it is one of the great brown trout flies of all time. The movement of the marabou fibres in the water is something fish find hard to resist and this fly catches brown trout whether it is swung, stripped back through the water or fished dead drift.

The Muddler Minnow was originated by Don Gapen of Anoka, Minnesota in 1936, to imitate the slimy sculpin when fly fishing for large brook trout. It has proved equally effective on brown trout and can be used to catch trout wherever they are found. Unweighted versions can be fished on a sinking or sink tip line to good effect.

Another classic style of streamer pattern, Zonker flies also boast great movement in the water with the rabbit fibres attrached to the long zonker strip pulsating alluringly. Zonkers are simple, effective and durable patterns that just catch fish. Don’t ignore using a white version of this fly in discoloured water.

The Mister Glister is a creating of New Zealand fly fishing guide Chris Dore and is a simple but deadly streamer pattern. It incorporates a natural colored zonker strip to give movement, a Glister body and a conehead to get it down deep nice and quick. Many a big brown trout has fallen victim to this brilliant yet simple fly.

While it is probably more known as a fly pattern for rainbow trout when they are feeding on salmon eggs during the spawning run, the egg sucking leech can also fool brown trout too. With the contrast of light and dark colors, the touch of flash and the movement of the marabou tail, this is actually a great fly for brown trout too.

I separated these out from the true dries because they are really a different category. I love terrestrial fishing whether it is hoppers in summer, termite falls or just casting a Chernobyl at the banks from a raft.

The Chernobyl Ant is a monstrosity of a fly. It looks like a liquorice lolly with the alternating layers of black and bright colored foam and the indicator wedges on top. Then you’ve got those buggy legs. How the person that first tied it imagined it would catch a fish is beyond me. But all prejudice aside, it works superbly. Fish love this fly in both the original form and the Chubby Chernobyl variant.

This is an Australian used by Tasmanian fishing guides and designed by top guide Peter Broomhall. It’s big, buoyant and buggy and fish just love it. It will float all day and remains visible in virtually any water making it a great choice for catching brown trout.

The Madam X is a classic hopper pattern with a thickset deer hair body that hits the water with a satisfying plop, just like the real insect. Add in the legs and the classic X-shaped profile from beneath and you’ve got an excellent hopper imitation for brown trout.

Brown trout love cicadas wherever you find them – they aren’t as common in the US, but in New Zealand and Australia, cicada falls offer some of the best dry fly fishing for brown trout you will experience. There are a variety of great cicada patterns including this deer hair version called Clarke’s Cicada. Keys to look for are a bit of flash and a translucent wing and a body with enough bulk to resemble the real thing. Fly fishing with cicada patterns is nerve wracking stuff when a big brown lifts off the bottom to grab these big flies.

Ants are probably the most under- utilised dry fly patterns for brown trout out there. Anyone who’s fished a termite fall can attest to the value of ant patterns as the fish go into a frenzy and won’t take anything that’s not a termite. But you don’t need these conditions to make good use of an ant – brown trout will take a well presented ant fly at any time. Here’s one of my favorite brown trout flies – the Hi Vis Ant.