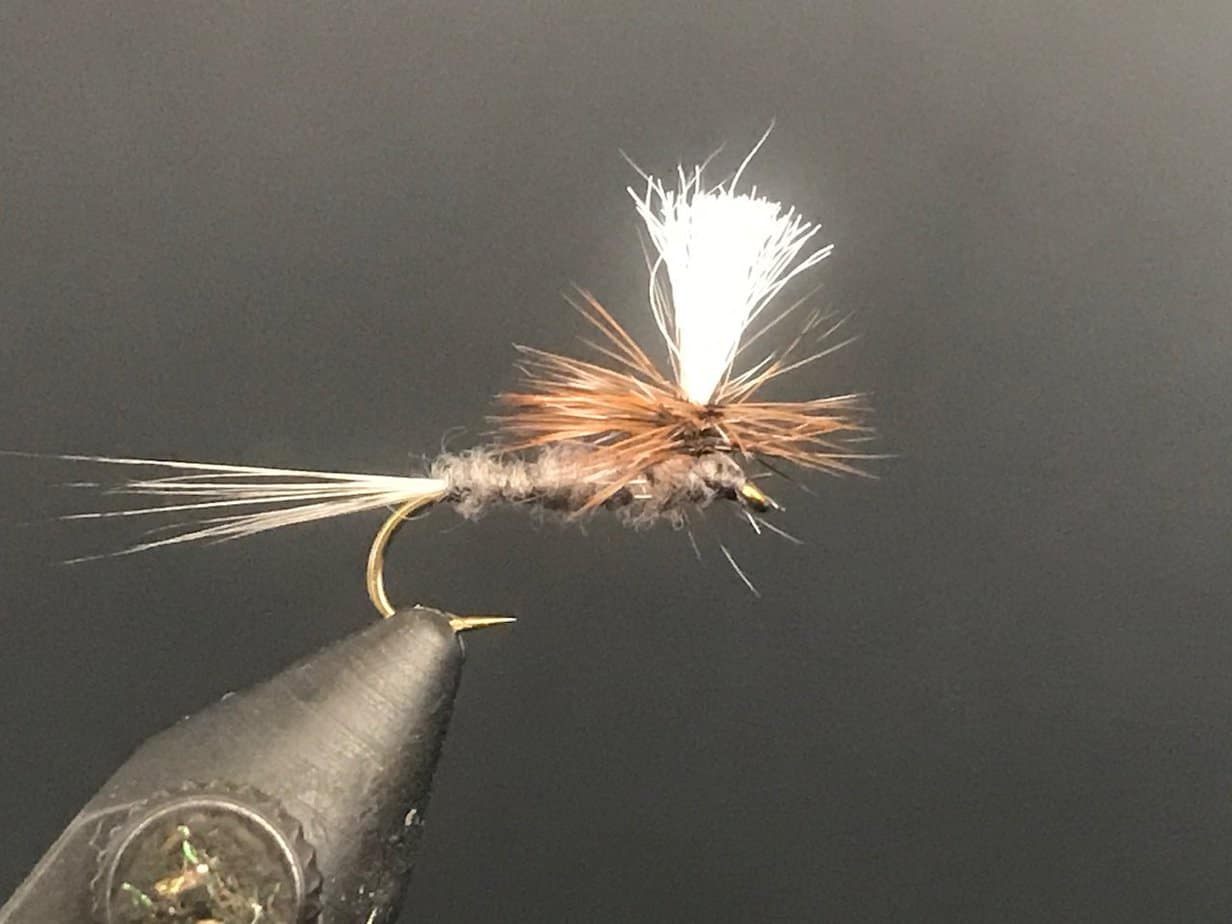 The Parachute Adams is one of the most popular dry flies in use today. It’s the parachute variant of a conventionally hackled dry fly first tied in the US in 1922.

Tied in sizes 12 – 18, it is a great mayfly imitation and the parachute tie means the body sits a little lower in the water. It is used throughout the world wherever trout are found from a New Zealand freestone stream to the rivers of the North American Rockies.

The parachute hackle version here is easy to spot with its bright post and it usually lands upright on the surface with the hackle tied in horizontally.

Here below are the full tying instructions in pictorial form along with a video on tying this Parachute Adams fly pattern.

The Adams is best fishing in a dun hatch, but can pass for an emerger too. The white post helps you see the fly even in fast glides or riffles. For slightly faster water, or during low light conditions, have some variants on hand tied with a pink or green post.

In larger sizes it can be used as a indicator with a nymph tied beneath.

Remember to match the size of the hatch too – no point throwing a #12 if the naturals are closer to a #16!

Place the hook in the vice and lay down a thread base. Tie in a small bunch of tailing feather fibres for the tail. Make it just slightly shorter than the hook shank.

Take a bunch of calf tail (or high vis) and tie in parallel to the hook shank. Flip 90 degrees and criss cross it in a figure of eight pattern with the thread. Then pinch both strands with your left hand, elevate them and wrap up the base to make the post.

Prepare the hackle feathers by holding in your left hand (shiny side towards you) and stripping the feathers from the first little bit (about 1/20 th of an inch) taking off about double that on the top section. Then tie the feathers in on the front side of the post, wrap up the post and bring the thread back to the front of the post. Dub on some more Superfine dubbing and take a couple of criss-cross wraps either side of the post to form the thorax, then wrap forward to make the head. Bring the thread back to the rear of the post.

Ensure the thread is taken back to a location closest to the body and take one of the hackle feathers and wrap down to the base of the fly taking three or so wraps. Tie off with two wraps in front and two wraps behind the feather. Trim. Repeat this process with the other feather. Trim.

Flip the fly back to the horizonal position. Trim the post to length and whip finish at the eye of the hook being careful not to trap any hackle fibres and you are done!

How to tie a Parachute Adams (video)