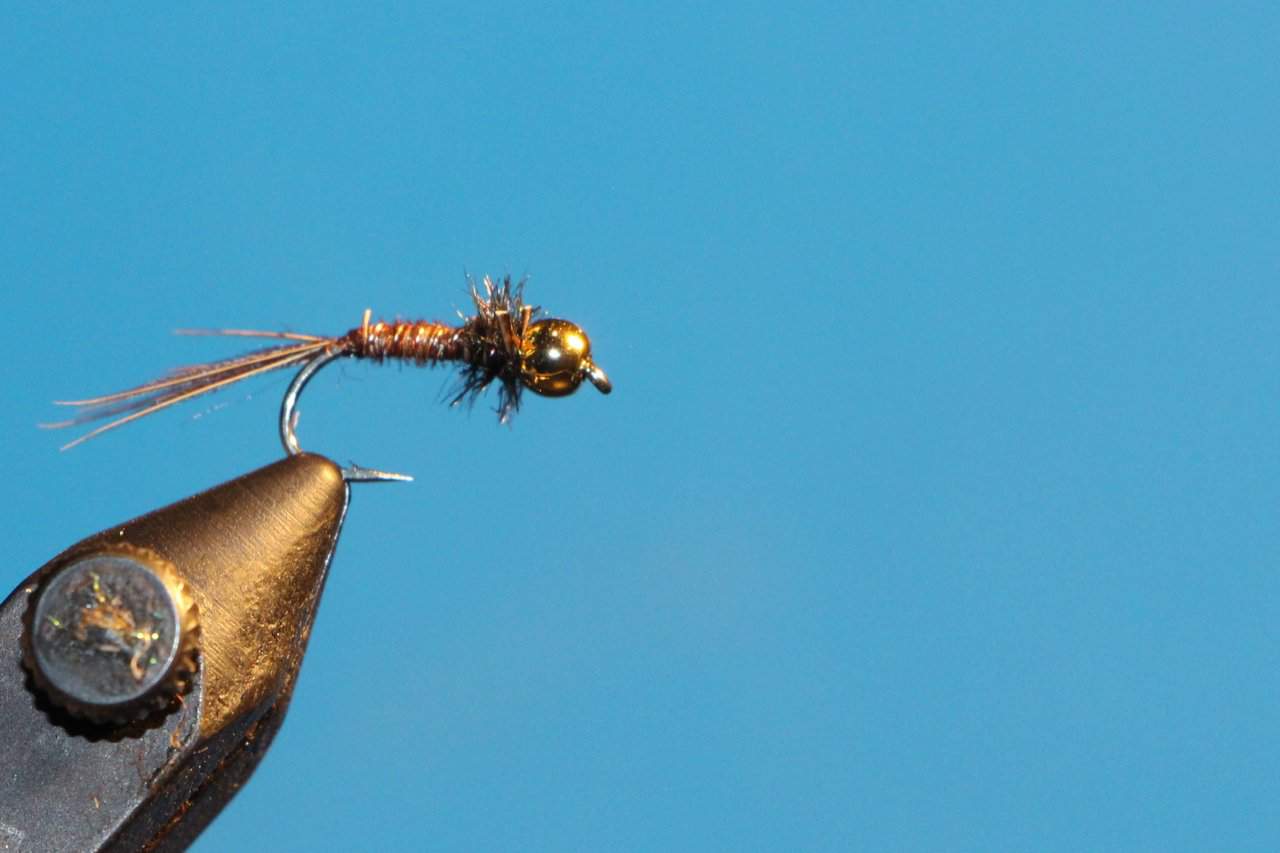 In this post we show you how to tie one of the most popular and effective nymph patterns for fly fishing for trout – the Pheasant Tail Nymph, often just called a PTN.

Pheasant tail fibers are the key building block of a huge range of nymph patterns, and the PTN is most popular of all of these in the fly fishing world. This fly is sometimes called Sawyer’s PTN in honour of its creator, English river keeper Frank Sawyer.

As with all our fly-tying articles, we’ll show you the full step-by-step pattern with pictures to tie the this pattern with all the materials needed. We’ve also embedded a handy video tutorial to tying the PTN.

Thread the bed on to the hook and place in the jaws of the vice.

Tie in a short section of copper wire and then take the thread forward from the tie-in point of the pheasant tail fibers to a position about two thirds of the way back towards the eye of the hook.

Wind the pheasant tail feather fibers forward around the hook shank to form the body up to the position of the thread before tying off and trimming the ends. Try to avoid the pheasant tail fibers twisting as you do this. Wind the copper wire forward to rib the fly with four or so segments. Tie off the wire and trim the end.

Tie in the peacock herl and (optional) two strands of tinsel in your preferred color if you want to make the flashback variant. Finish by taking the thread forward to a position hard up against the bead.

Wind the strands of peacock herl forward with sequential wraps trying not crush the previous wrap to maintain bulk for the thorax. Tie down with just one of two wraps of the thread. For the standard PTN, whip finish now and the fly is complete if you add a drop of head cement.

If you are tying the flashback version of the fly then bring the two strands of tinsel forward over the thorax and tie down with a couple of wraps before whip finishing the fly and you are done! There you have it – a simple PTN pattern that will catch fish.

Here’s a top view of the tinsel on the top of the flashback version of this pattern.