What Does Matching The Hatch Mean in Fly Fishing? 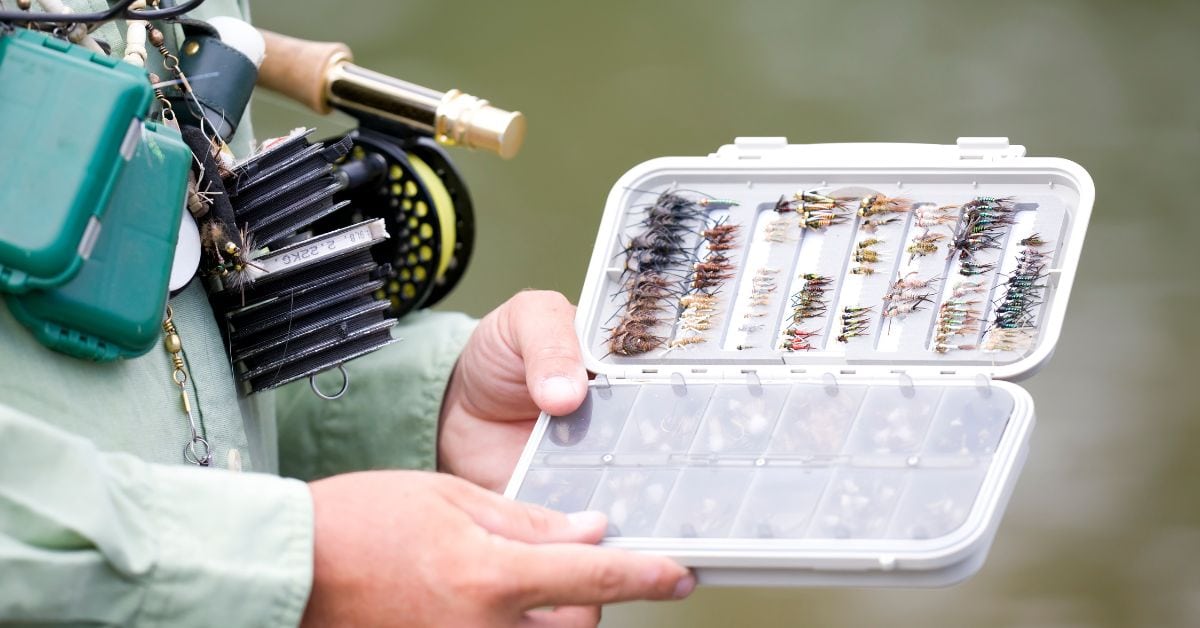 Matching the hatch in fly fishing is a general term that means imitating the particular insect that trout are feeding on. It’s that simple.

Working out what insects are hatching and then using a realistic imitation is great way to give yourself a great chance at catching trout.

But it is important to not only match the type of insect that’s hatching, but the stage at which the insects are at when the trout are feeding on.

That determines if you need to fish a nymph, emerger or a dun pattern, if we are talking about mayflies, midges or caddis (classic hatching insects).

The term match the hatch also applies to terrestrial insects that fall on to the water such as ants, hoppers, crickets and more.

It is equally important to match the profile and size, as well as the color if possible, of these insects too even if they don’t “hatch” in the classic sense.

In the section below we discuss matching the hatch in practice when you arrive on a piece of water and find fish actively feeding.

Matching the Type Of Insects Hatching (or falling)

The first thing you need to do is work out what type of insect the fish are feeding on. Sometimes that as easy as looking in the air around you: you might see a cloud of caddis flies, or mayfly spinners and that gives you a clear indication.

The other technique is to look on the water surface and see what is drifting down the feeding line. You might see ants that are falling from a tree, or duns emerging through the surface film.

Then you are on tract to selecting the right fly to imitate the natural insects.

But that’s only half the battle sometimes, as we explain below.

See also: What do Trout Eat?

The other key ingredient to master for matching the hatch is to match the size of the hatching insects. It is no good fishing a size 12 dun or nymph when the type of mayfly hatching is, say, caenids, which are a #20 sized mayfly.

Similarly, you wouldn’t fish a tiny caenid size fly when there are large mayflies such as green drakes hatching.

Size is the easiest of the three variables to get right, but is very important and it can mean the difference between a successful trip or a tough day on the water.

Matching the Stage of Insects Hatching

Matching the hatch is much more than just getting the species right. Hatching aquatic insects such as mayfly and caddis go through a life cycle of distinct stages.

For mayfly, the larvae stage hatch from eggs at the bottom of the stream or lake. Most fly fishers call the larvae nymphs. Nymphs are able to crawl and feed on the stream bed until it is time for them to emerge (transition from the aquatic staff to air breathing flying insects).

A bubble of air and gas carries the nymph/larvae to the surface where it breaks out of its exoskeleton one the surface and becomes a dun.

Mayfly that are midway through this transition are called emergers. After the emerged mayfly is able to dry its wings it becomes a dun and flies off the water’s surface.

Within one to three days, the mayfly duns reach sexual maturity and undergo another molting process where they another outer skin and become spinners – the thin mayflies you’ll often see in large clouds on dusk.

The spinners mate and the male falls to the surface first and dies becoming a “spent” spinner that you often see on the river with their translucent wings splayed. The female then lays her eggs on the water’s surface and she too dies and becomes a spent spinner.

Caddis flies and midge undergo a similar life cycle, but with one more stage. Instead of ascending to the surface as a moving insect, the caddis and midge larva turn into pupa.

Pupa are dormant and motionless as they ascend to the surface where they turn into adult insects.

So why this big lesson in entomology? Well it is important to know these basics so we can imitate not only the right insect, but the right stage of the insect as shown below

When there is no obvious hatch and no fish obviously rising, nymph fishing is most productive. You can fish bead head nymphs to get down deep if required. Fishing unweighted nymphs can also be productive in the early phases of a hatch when trout are eating the nymphs as they rise up. Caddis nymphs are often green in color, hence the imitations tend towards that shade. Mayfly nymphs are typically brown to black in color. Nymph larva are red in color.

For caddis and midge they do enter the pupa stage, which is bonus for the trout as the pupa is motionless as it ascends and easy to pick up. Pupa ascend with a visible air bubble in the thorax and effective patterns imitate this. The above image shows a midge pupa fly and a caddis pupa fly.

Emerger stage: Emerger flies (usually tied on curved hook with the tail and part of the body and poking through the surface film)

The moments when hatching insects transform from emergers to duns is when they are at their most vulnerable. The process takes time and the insect is effectively trapped – and at the mercy of feeding trout – until that transition is complete.

Having a good selection of emerger flies for both mayfly and caddis hatches can be crucial to your success.

Pictured above is the Klinkhammer, probably the most well known emerger pattern in fly fishing.

In the dun stage, trout have a bit less time as the insect is on the verge of flying away. As the hatch transitions more and more duns appear on the surface and they become a viable food source for the trout alongside the nymph and emerger stages.

Dun patterns float high and are highly visible, so can be easier to fish from the point of view of detecting strikes than fishing a low-riding emerger fly or a nymph.

Spinners – mayflies that have reached sexual maturity – and narrow bodied and fly above the water in small clouds. Trout love to feed on them and if you can match the color and profile, you are in for some fine fly fishing. Here above is a red and black spinner pattern.

This is another key phase of the mayfly hatch all fly fishers need to be aware of to effectively match the hatch.

Spent spinners land on the water’s surface as they die off overnight and trout feed on them extensively in areas where they have accumulated.

They love mopping up the dead spinners as breakfast!

A decent spent spinner pattern is sparsely dubbed and has two distinct hi-vis wings splayed out to the sides so they sit flush on the surface, like the actual insect. I like the version below with the foam thorax as it helps keep this fly afloat as it is sitting their inert waiting for a trout to pick it off.

As mentioned, matching the hatch in fly fishing applies to terrestrial insects falling on the surface too. Usually it is matter of using your observation skills to determine the main insect that trout are feeding on to determine if it is ants, beetles, hoppers or other types of insects.

Successful fly fishermen and women always carry a decent range of terrestrial dry flies as the right pattern can really help you catch lots of fish in the right circumstances.

How do you tell what aquatic insects are hatching?

Often it is about simple observation. What insects can you see flying around you or on the surface of the water? If see duns popping off that tells you to fish a dun or emerger pattern. If there are clouds of caddis then that puts you on the right track to choosing the right fly to fish.
Looking at a hatch chart for the place you are fishing in advance, or talking to a local fly shop, helps tell you what to expect.
But if there is no visible hatch, then you can strain the current with a portable seine net to find out what’s floating down river. This will give you a good starting point in terms of determining the kind of nymphs hatching and what fly patterns to use.
Or sometimes it is enough to turn over a few rocks on the stream bottom and look for the size and color of the nymphs you find on the underside.
The other option is to pump out the stomach contents of the first fish you catch so you can see first hand what they are eating and choose the right pattern. This obviously relies on getting that initial fish though.

What if you don’t have the right fly in your fly box?

This is a common situation in fly fishing where you might find you don’t have an exact imitation of the particular aquatic insects hatching. My advice is don’t despair, often the fish are clued in to size and profile rather than color and materials. For example they might take a caddis pattern even if mayflies are hatching and vice versa provided it is the right size. A versatile pattern such as an F-FLy covers both bases. You can always get out your scissors or nippers and modify a fly to suit.

Do you have to match the hatch to catch fish?

No, there are who family of fly patterns that don’t look like anything in particular but are among the most successful flies ever. Think of the Royal Wulff and the Stimulator. These flies just provoke a response from fish when they are in the right mood. Maybe it is the triggers in these flies, or maybe they bear just close enough resemblance to a variety of insects to succeed in a range of circumstances.
So you don’t have to match the hatch, but sometimes you will encounter fish that are locked on to a particular food and won’t take anything else. This usually occurs when that food is really plentiful. I’ve seen it happen with beetle falls, willow grubs, mayfly and caddis hatches. This is where you really must have the correct fly in your fly box to enjoy fly fishing success.

Final Thoughts on Matching the Hatch

This article has set out the basic principles of matching the hatch and hopefully sets you up for some successful fly fishing next time you are out on your local river or lake. Applying these tips, and stocking your fly box with a decent range of flies, will see you catching more fish.