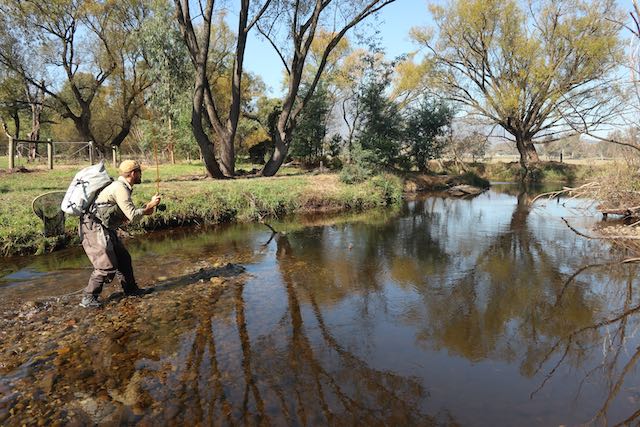 Tackle Village’s Rick Wallace and Dan Lovecek break the shackles of COVID and take a chance on a late season stream session.

Remember 2021 started with a sense of optimism about how the worst was behind us?

Us fly fishers here in Victoria felt the same way – with much of the spring of 2020 lost to COVID, surely 2021 would be better.

Lockdown had lifted (although it would rear its head again) and rivers had been rested.

Theoretically it should have been perfect. But for me, my fly fishing just never quite got going – the lost hours of pleasure seemed to be always front of mind; the frustrations of lockdown too, coupled with limited opportunities to get on the water.

As a result, when I got out, I fished poorly or suffered ill fortune – too much haste, sloppy casting, unco-operative fish, missed strikes and choosing the wrong days.

So when the chance to sneak away for a final trout fish – for rivers anyway – for the year there was much riding on it. Eight short hours to rediscover the joy of fly fishing before the chill of winter set in.

Dan picked me up at the relatively gentlemanly hour of 7am and we set off for one of the small streams in the Goulburn catchment.

As with all late season missions, there is a sense of trepidation. Push too far into late autumn and you bump up closer to that day when the fish switch over to reproduction and the streams shut down.

Compared to Rick, season 2021 had afforded me more plentiful fishing opportunities and so this rare late season outing took on the relative air of a bonus session unladen by the usual weight of expectation.

Despite a very cool and crisp start to the day, the forecast of light winds, highs in the mid-twenties and a Friday luxuriously free of work commitments, toddler-rearing responsibilities and lockdown restraints was incentive enough to escape.

In any event, any residual concerns that the day would not yield results were quickly dispelled. I suspect it’s a shared affliction but I suffer terribly from a compulsion to have a sneaky look at a promising pool or riffle when taking a walk downstream to establish a

session’s beat. That day was no different and Rick was similarly unvaccinated against this disease and obliging!

The sight of three steadily rising trout in the first small pool inspected was more than enough to quicken the pulse. Better yet, each brown proved willing to oblige us after a quick change to 6X tippet and downsizing to a size 18 caenid pattern. It was a great start to what would prove to be a rewarding day out.

Eventually we managed to drag ourselves away from this great pool and walked a couple of kilometres  downstream to a suitable starting point and worked carefully up the river. A good number of chances presented over the course of the day with the bright sunshine providing optimal sight fishing at times. A subtle but consistent rise over the course of the afternoon was also welcome and some lovely well-conditioned fish came to the net, including a number over 2 pounds, and were quickly released.

At one point, Rick spent a good deal of time waiting for a chance to present a fly to a sighted and much larger specimen feeding happily in an unfortunately tight and unforgiving location but it wasn’t to be. I was encouraged, though, to know that such beauties are still there, particularly at the end of a season of reduced but still ample fishing pressure …

We quickly settled into the pattern of either sighting a fish and presenting to it or casting into likely lies and watching the dry carefully, often squinting into the light thrown out by the low lying sun as it made its arc across the sky to our north.

With your eyes locked on either fish or fly there’s not much room for anything else to enter your consciousness – not COVID, not lockdowns, nor work.

With the river carrying a good head of fish we were able to move on from one opportunity to the next correcting faults or errors in approach as we went.

We fooled a good number of fish with the F-Fly and small mayfly patterns accounting for the majority.

I could feel the grip of frustration that had bedevilled my previous post lockdown sessions weakening and the joy in what we do returning.

As Dan said, one or two bigger specimens took the points on the day but we’ve noted their locations for a return bout in the season to come – a season I feel a lot more positive about having shaken off my fishing demons.

When it is your last session of the year and you know it, it takes on a greater import to me than other sessions and ending it with some champagne dry fly fishing is hard to beat.

At this time of year, the warmth of a late aAutumn afternoon is quickly displaced by the cool descending mist in the valley and with a rapidly darkening sky we reluctantly called stumps on what had been quite the day.

Soon after this trip, the winter rain set in drawing the curtain on season 2020/21 but also providing the flows to stimulate spawning and river health to set up next season.

I think it is going to be a special season – not just because we should be shaking ourselves free of COVID’s grip, but the state of our lakes and rivers – refreshed over a cold, wet winter – promise some wonderful fishing.

And we are determined to make the most of it!

Some of the action from our trip: