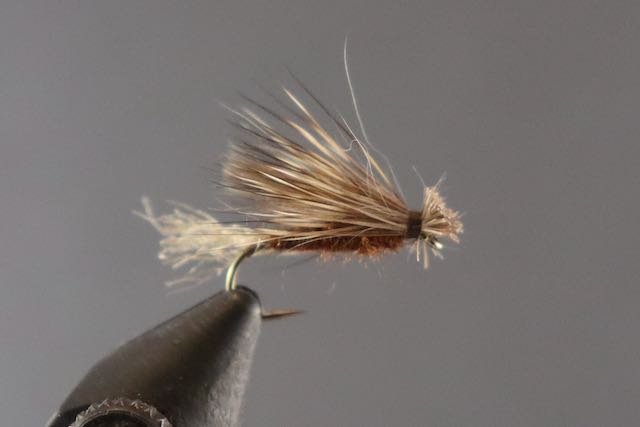 The X Caddis, with it’s trailing Zelon shuck, can emulate both the dun and emerger stage of a hatching caddis.

It is a versatile caddis dry fly pattern and a good alternative to the Elk Hair Caddis. The X-Caddis was created by Yellowstone fly tying expert Craig Matthews.

It is a very versatile caddis pattern emulating a variety of stages of emergence while remaining a buoyant dry fly pattern that is easy to tie. 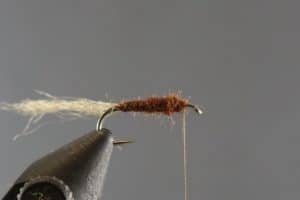 Lay down a thread base and tie in a small bunch of Zelon or Antron fibres to make the trailing shuck.
Then dub a slender tapered body finishing slightly short of the hook eye to leave enough room to tie in the wing. 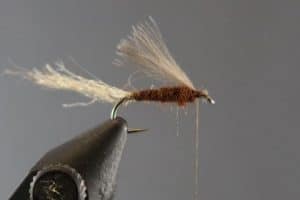 Tie in one of two small CDC feathers as an underwing. The feather tips should protrude to a point level with the hook bend. 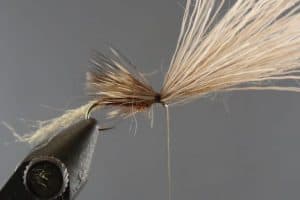 Take a small bunch of deer hair (about as thick as a pencil) and comb out the under hairs. Stack it in a hair stacker and tie in over the top of the CDC underwing. Tie in with four concentric wraps, each harder than the previous, to ensure the deer hair is anchored and the fibres begin to flare to form the head. When judging the tie in position, the tips should protrude to the same point – about level with the hook bend. 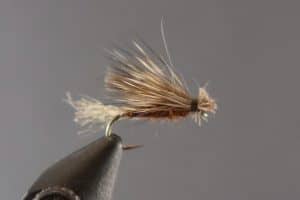 Before trimming the deer hair, lift the fibres back with you left hand and form a thread head between the eye and the deer hair bunch. Then whip finish and cut off the fibres on a 45 angle to form the head. (If you cut the head first, the shorter head fibres often become trapped when you are trying to whip finish.)
Trim off the trailing shuck so it is roughly half the length of the hook shank.