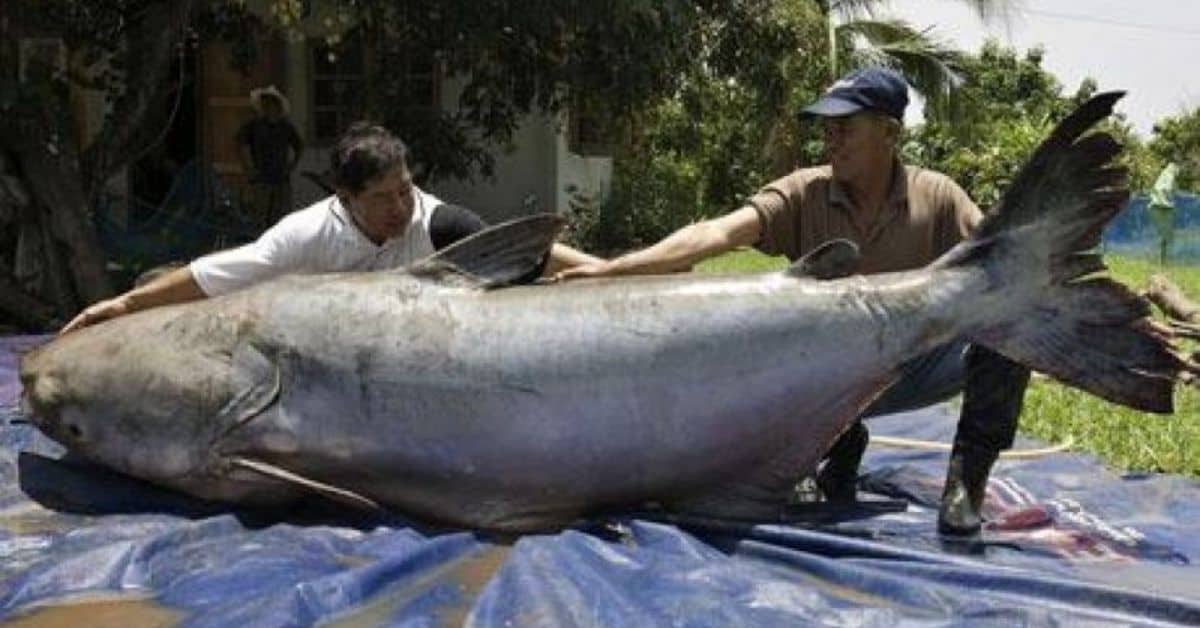 The largest catfish ever caught, according to The Guiness Book of World Records, was a Mekong giant catfish that weighed 646 pounds. Caught by a villager from Thailand, the record-setting catfish was 9 feet long. It is the largest fish ever recorded since Thailand began keeping records in 1981. Critics chastised the man for catching the fish because the Mekong giant catfish species is a critically endangered species.

The Mekong River in Southeast Asia not only hosts the Mekong giant catfish but seven other freshwater fish which are among the largest species in the world. This could be because the region retains more of the old customs and ways, with small villages dotting the shoreline and native fish and wildlife providing needs for local people. Recent commercialization and industrial growth, however, are damaging this fragile freshwater ecosystem. There may only be a few Mekong giant catfish in existence.

Another massive catfish species is the Lau lau, or Paraiba. These giants can reach sizes up to 450 pounds and live in the Rio Solimoes, the upper section of the Amazon River in South America. The Lau lau catfish is a behemoth that swims up and down the river, feeding on any smaller fish in its path. In 2009, a local man named Jorge Masullo de Aguiar was fishing the river, hoping to catch some native fish when a huge Lau lau took his bait. After a long fight, Jorge landed a 341 pound fish. It is the largest catfish ever caught in this species.

One more giant species worth mentioning is the wels catfish, found in southern and eastern parts of Europe. These fish are massive, weighing up to 400 pounds and measuring up to 10 feet in length. They are found in river tributaries of the Baltic and Bering Seas. The world record wels catfish record dates back to March 11, 2010 when Italian fisherman Attila Zsedely caught a wels catfish weighing 297 pounds in the Po River of Italy. It was the largest catfish ever caught in the area.

These giants outsize blue and flathead catfish by hundreds of pounds, so it is no wonder they certified these fish as world record catfish. A little closer to home, the records aren’t that impressive, but there have still been some amazing catfish catches in local rivers and lakes, without having to travel to the Mekong River.

The current world record blue catfish in the all tackle category belongs to Richard Nicholas “Nick” Anderson who was fishing Kerr Lake, aka Buggs Island Lake, Virginia on June 18, 2011. Using chicken pieces on 30 pound test line, Anderson hooked a 143 pound blue catfish. Nick Anderson used an Ugly Stik rod and Shimano spin-cast reel. The fight lasted 45 minutes fought before Anderson landed his record catch. The fish was weighed on a certified scale and verified by the Virginia Department of Wildlife and recorded by the International Game Fish Association as the new world record blue catfish. The fish measured 57″ long and had a girth of 47″.

The world record in the flathead catfish species class dates all the way back to May 19, 1998. On that warm spring day, Ken Paulie was fishing Elk City Reservoir in Kansas. He hooked into a catfish and thought it was going to be a big one. After a short fight, he had reeled in a 125 pound flathead catfish.

Some states and countries do not recognize line class records, but someone can still certify the fish through the International Game Fishing Association.

The current record holder for the 8 pound line class is 14-year-old Zachary Lovelady from Soddy Daisy, Tennessee. The boy was fishing with friends in Chickamauga Lake Reservoir on May 19, 1998 when he hooked a huge blue catfish on a piece of cut bait. Amazingly, the 71 pound boy managed to reel in a 109 pound record catfish after a three-hour battle. The boy said, “I just had to keep walking back and forth along the bank” to wear the fish out. When it was close to shore, a friend jumped in to help land the big catfish. The fish was certified as a record blue catfish in the 8 pound line category, but fell short of the Tennessee record by 2 pounds.

The Mississippi river is known for some of the largest blue catfish in the United States. As the longest river, there is plenty of water to fish in. Charles Ashley, Jr. was fishing the river between Arkansas and Tennessee on August 3, 2001. Just downstream of the Interstate 55 bridge at Memphis, Ashley hooked a big fish. He set the hook and realized just how big the fish was. With the help of two friends, Ashley pulled the record blue catfish into the boat and headed off to get it weighed on a certified scale. The Arkansas Game and Fish commission certified the fish and recorded it as the Arkansas state record blue catfish. The most unusual part of this story is Ashley’s choice of bait. He was bottom fishing with a hunk of Hormel Spam.

The 20 pound line class catfish record is a flathead catfish caught in the San Jacinto River in Texas. Stacy Small was fishing with live shad bait and hooked a flathead weighing 84 pounds, 6 ounces. This record has been in place since May 27, 1987. Isn’t it about time somebody broke it?

The Junior World record Catfish title goes to Landon Evans, who was just 15 years old when he caught a world record catfish in Lake Gaston, North Carolina in 2016. On vacation with his family at their lake house, Landon went out onto the dock on Saturday evening with two rod setups. He had a lightweight rod rigged for bass and a heavier one rigged for catfish. As he lazed in the hammock, the lighter rod signaled a fish, so he jumped up to reel it in quickly.

When the head of the large catfish emerged, Landon called his parents for help. It took two nets and three people to pull the fish onto the dock. It then took three days to find a biologist and have the fish weighed and certified as a 117 pound blue catfish. Not only did Landon set the Junior World Record for blue catfish, he also grabbed the North Carolina state record and the record for the largest freshwater fish ever pulled from Lake Gaston.

Sadly, Landon’s state record was broken on July 10, 2021 by Rocky Baker, an angler from Four Oaks, NC. Baker was fishing in the Roanoke River using a Penn Squall Reed and a MadCat rod with 3 inch shad for bait. He hooked a massive catfish and fought for over an hour to land it. Suspecting it might be a world record, he tried to find out where to get it weighed and certified. After driving over an hour to Greensboro, he and his buddies put it in the live bait tank at EZ tackle and waited until it could be properly documented. Several hours later, a biologist confirmed the catfish species as blue catfish and weighed it. The fish was 127 pounds, making it the biggest catfish caught in North Carolina. After weighing and certification, Baker and his friends took the record blue catfish back to its native location and returned it to the water, letting the fish continue its life.

The new Texas state record belongs to Cody Mullinex who caught a 58″ long blue catfish while fishing the Hagerman National Wildlife Refuge near Lake Texoma in January 2004. After fishing for several hours, Cody reeled in a 121.5 pound record blue catfish. The fish was verified by Texas Parks and Wildlife Department, then lived for several years at Texas Freshwater Fisheries Center in Athens, TX. The fish eventually died of old age.

The largest catfish ever caught on a 16 pound tippet, used in fly-fishing, was a flathead catfish that weighed 69 pounds. This world record flathead catfish was pulled out of the Cape Fear River in North Carolina, a waterway of salt marshes fed by the tidal waters of the Atlantic Ocean. On July 27, 1994, Edward Davis was recreationally fishing when he hooked the large flathead catfish on a small live perch.

Greg Bernal of Florissant, Missouri caught a 130 pound blue catfish while fishing in the Columbia Bottom Conservation Area in July 2010. This giant fish measured 57inches and 45 inches in girth. It was caught on 40-pound test line with a chunk of cut bait.

Catfish as an invasive species

In the Chesapeake Bay of Maryland and Virginia, blue catfish and flathead catfish are causing all kinds of problems. The area has had invasive species introduced before, when snakehead fish were dumped into waterways by aquarium owners. Just as they are getting the snakeheads under control, catfish from smaller rivers and streams in Virginia are invading the brackish water of the Chesapeake Bay.

The Maryland and Virginia Department of Natural Resources developed a task force to create a plan to get these invaders under control because they are affecting the native distribution of smaller fish species and causing major damage to plant matter in the bay. The agencies figured the best way to get rid of these catfish species is to catch them and sell them for eating. Electrofishing has been introduced to kill massive quantities and wild catfish is now being sold at grocery stores around the location.

With nearly 3,000 species, catfish are one of the most populous fish in the world. From rarities like the giant Mekong catfish to channel catfish that swim in almost every United States river, there are plenty of catfish waiting to be caught. Catfish feeding patterns are consistent. They like to feed near the bottom and will eat almost anything, from live bait to artificial lures. I encourage anglers of all ages and experience levels to get out there and catch a catfish out of your local river or lake. We can’t all catch world record catfish, but we can have a good time and enjoy nature, no matter what location we live in.