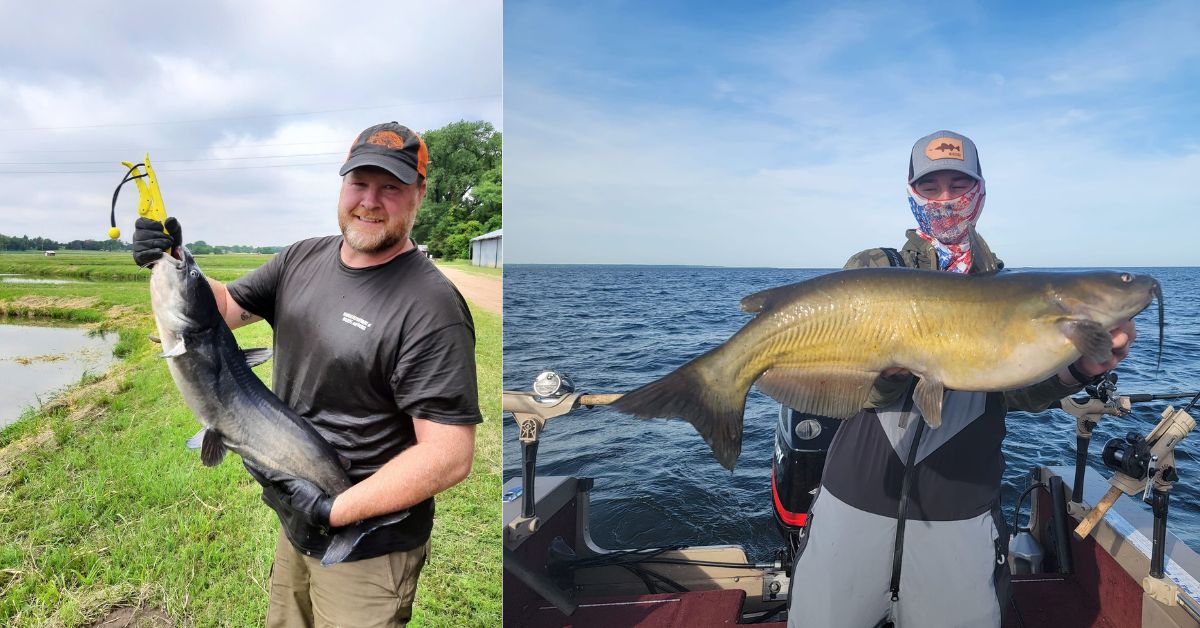 There are over 3000 catfish species in the world, but if you asked anglers to identify their favorites, most would mention blue catfish and channel catfish. Many anglers would rather fish for catfish than any other species. One of the reasons these fish are so popular is because they are so plentiful and easy to catch. Another reason is that they give fishermen a good fight, and nothing is more fun to an angler than the give and take of a bent rod battle with a good-sized fish.

Blue Catfish vs Channel Catfish: How to Tell Them Apart

At a quick glance you might find it hard to tell the difference between blue catfish vs channel catfish. Both fish have 8 barbs around their mouth, a silver or white belly, and a forked tail. Both can be a blue grey color, and blue catfish can live in the same habitat channel catfish live in.

Let’s take a close look at each of these fish and determine the best way to tell the difference between them.

All About Blue Catfish

The blue catfish is the largest species in the United States. It is also one of the most popular catfish species for sport fishing. Blue catfish, scientific name Ictalurus Punctatus, means fish cat with a deeply forked tail.

The average blue catfish weighs 20 to 40 pounds and measures 25-45 inches, but it is not uncommon for them to reach weights up to 100 pounds. The largest blue cat on record was caught in Texas in 2004. It had a recorded body weight of 121.5 pounds and was 58 inches long. This massive blue cat lived 23 years.

Blue catfish are native to the Mississippi River, but live in the major rivers and tributaries of the United States. Anglers fish the Mississippi river basins from northern Illinois to the Gulf of Mexico. Blue catfish can also be found in the Missouri and Ohio rivers.

Blues prefer water with swift to moderate current. They will travel to the north in the early summer and to the south in the winter to find comfortable water temperatures. Spawning season is in the late spring. The female blue cat lays 1500 to 2000 eggs per pound of body weight. The male then fertilizes the eggs and guards the nest for 7 to 10 days, until the fry hatch and become self sufficient.

How to Catch Blue Catfish

Blues stay in deeper water during the hottest part of the day, but will move into the shallows in the evening when the aquatic insects start to appear. Blue catfish can be caught by bottom fishing crawdads, cut bait, worms, or artificial bait. Some fishermen throw out attractants like bloody livers, small chunks of cut bait soaked in blood, or canned corn.

In deep lakes, fish in the bottom third of the water column, but not directly on the bottom. A Carolina Rig works great for this. Use a good sized weight and attach a one to two foot leader, depending on water depth and temperatures. In moving water channels or large streams, look for undercut banks, fallen logs, or debris piles.

Like other catfish species, the meat is firm and white. The taste can vary widely depending on what the fish eat, but in cool and clear water, blue catfish is mild tasting. It can be prepared by frying, grilling, or baking, but fried catfish is the most popular.

All About Channel Catfish

Other differences between the two fish include color, size, and tail shape. While the channel catfish also has a forked tail, it is not as pointy as that of the blue catfish. This rounded forked tail is one way to tell at a quick glance whether you have a channel catfish or a blue. Channel catfish are more of an olive brown color, and smaller fish will have dark spots along their sides.

Unlike flathead catfish, which have a pronounced underbite, the lower jaw of the channel catfish does not extend past it’s upper jaw.

The channel catfish is the most numerous catfish species in North America. They are found in lakes, reservoirs, or rivers with low or moderate current in most states east of the Rockies.

How to Catch Channel Catfish

Most channel catfish will bite any baits they see. Live baits like crayfish, shad, or worms work well. Fish in debris piles, around discarded tires or barrels, or around bridge supports. Channel catfish are also attracted to commercial stink baits (check one here), chicken livers, and even hot dogs. They are loved by fishermen because they will bite almost any bait and smaller channel catfish have a sweet, mild flavored taste.

Some channel cats are raised on fish farms specifically for the restaurant industry. These fish are fed commercial fish food instead of live bait. Their growth and health is closely monitored.

Young channel catfish are prized as being excellent table fare in the United States. These small fish have a milder taste than larger channel catfish, partly because these fish do not reach sexual maturity until they are about three years old. Small channel cats, whether they are angler caught or farm-raised, have a firm, white meat that is flavorful without being too strong.