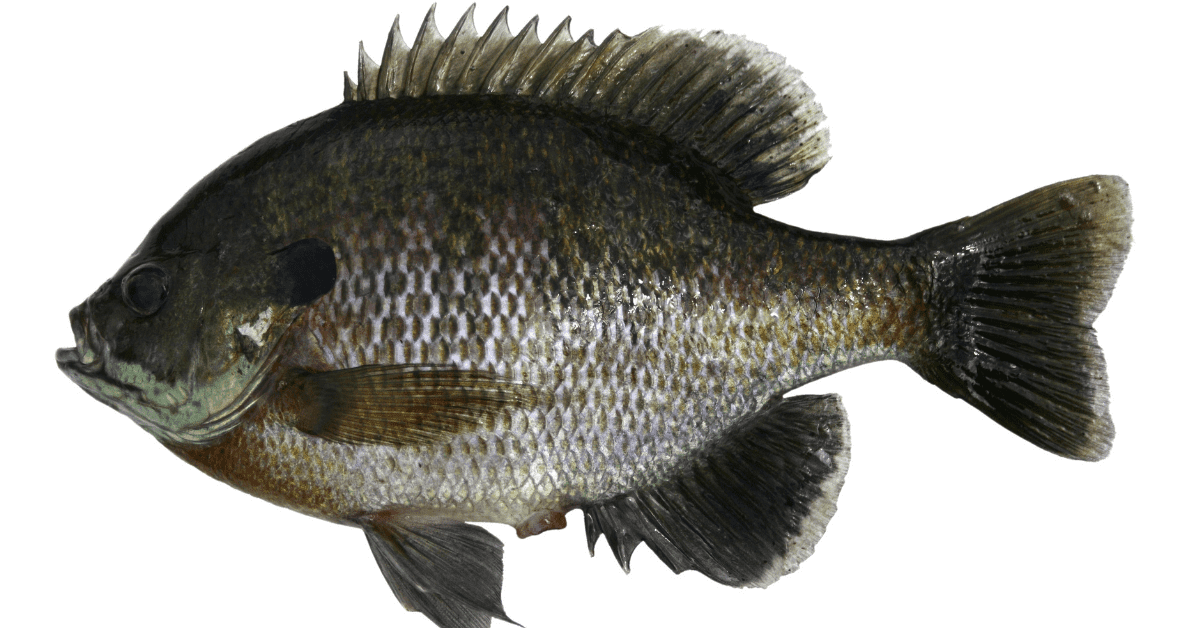 The world record bluegill was caught in 1950 in Ketona Lake, Alabama with a cane pole and common worms and weighed almost five pounds.

Bluegill, a panfish native to most bodies of freshwater, typically grow to 4.5″-7″ in length and weigh less than a pound.

But as we explain in this article, it is possible to catch record breaking specimens of 15″ or more. Read on to find out more about IGFA bluegill records and how and where to target these outsized bluegill.

What is the world record bluegill?

This world record fish measured 15″ long and weighed 4 pounds and 12 oz. Alabama’s Ketona Lake, coincidentally, was the site of the previous world record bluegill, caught in 1947. Today, this private pond is not open for fishing.

In 2010, an angler name Mike Tahash threatened the decades-old world record when he reeled in a fish that would rival the world record. His catch weighed 3 pounds and 6 oz. and was over 16″ long. He pulled the state record fish from the Colorado River in Bullhead City, Arizona (near Lake Havasu), while kayak fishing with a live nightcrawler on 4-pound test line. While not a world record, the fish was declared the new state record.

Other state record bluegill catches include a 4 pound, 5 oz. giant caught by Danny Case while fishing in twin ponds on his grandmother’s property in Henderson County, North Carolina. This 1967 catch was the largest ever caught in the state, and Danny Case was just a boy of 12 years old when he reeled in the big bluegill that had latched onto a floating Catawba worm being pulled through the weeds.

The bigger bluegill seems to like the warmer weather of the southern United States. In 1970, Thomas Jones pulled fish out of a private pond in Virginia. The big fish weighed 4 pounds and 8 oz. and was caught with a nightcrawler threaded onto a hook.

In South Carolina, J.P. Hegler reeled in a 3 pound 4 oz. bluegill from Lancaster Pond. The record has remained since 1973.

Another notable catch is that of Phil Conyers, who was fishing in an old strip mine lake in Kentucky. After getting off work one day, he decided to relax by throwing a line into the lake, which was on coal company property. He rigged up a 4-inch artificial worm on a small hook and dropped it in. A little while later he pulled in a 4 pound, 3 oz bluegill that became the new record for the state.

Where to catch record bluegill?

One notable detail is that all of these record fish were caught in warmer areas. While most waters in seasonal areas go through periods of extreme cold and moderate warmth, lakes, creeks, and ponds in the south are temperate year round. Water temperatures remain above 50° F, creating an environment sunfish prefer.

Bluegills, as well as bass and crappie, tend to congregate in the warm, shallow waters east of the Mississippi River. That doesn’t mean you can’t catch bluegill in other bodies of water. Bluegill are found all over the United States and as far away as South America and even Africa.

Like other fish, bluegill spawn in obvious areas along the shoreline, digging into the mud and silt beneath tree shaded banks. Baby bluegill tend to remain under the cover over lily pads or hiding in dense aquatic vegetation, in an attempt to avoid being eaten by other fish.

Bluegill reproduce quickly and often overrun a small waterbody. In some places they are labelled as a destructive invasive species because they have overpopulated to the point of endangering the numbers of bass and other game fish.

Bluegills are one of the hardest fighting fish for their size, but also one of the easiest to catch fish. A simple hook and bobber dropped just above suspended bluegills will provide plenty of fishing fun for anglers of all ages and experience levels (see here for some tips on catching bluegill). Like bass, bluegill grab the bait and run with it. This makes fishing for bluegills fun for the whole family, plus bluegill make excellent table fare. The sweet, firm meat is delicious fried or grilled with just a hint of seasoning.

Bluegills, like most sunfish, will eat just about anything. Catching one is as easy as getting the bait close to the fish’s mouth. Anglers have successfully landed bluegills on live bait, artificial lures, and even common food items like corn kernels and pieces of hotdog.

Record holder Phil Conyers caught his fish on an artificial worm on sinking line with a small weight, while Danny Case used a floating worm reeled in at fast speed. As with most fishing, catching a bluegill depends on being at the right place at the right time.

Anglers can fish from the shoreline or from a boat, using simple bait such as small minnows, crickets, and nightcrawlers. John LeMaster, of Chipley, Florida, caught his record bluegill while trolling the lake in his boat while dragging a live cricket.

Another fun way to catch these active little sunfish is with a fly rod. Fly fishing, once thought to only be effective in rivers and streams out west, is quickly becoming more popular and you will now see many a fly fisher casting line across the lake.

When fly fishing for bluegill, bass, redears, and other sunfish you need to present to fish who are bedded on the banks of lakes and streams. Start with an ultralight fly rod, like a 4 weight and pair it with vanishing, sinking line. Choose a dark colored streamer or nymph, like a Mickey Finn or a Soft Hackle wet fly.

Fly fishing for sunfish is unmatched in terms of excitement. There is nothing quite like watching the fish snatch the bait. If you need more information about catching bass, trout, or bluegill from a fly rod, there are many popular videos and a great deal of online magazine content available. The best way to learn is to find a hardcore group that includes an old fly fisher and pick his brain. Sometimes experience offers things digital access can not.

If you want your next catch to be a pending world record sunfish, fish the obvious places around the lake shoreline. Look for aquatic grasses, fallen trees, and submerged tops. Dangle live bait over suspended fish or drop a fly directly over the fish bed. In deeper waters, try trolling along the thermodynamic divide between warmer and cooler water. Artificial baits like worms, minnows, and poppers will attract the fish. If you are just looking for some fun fishing, grab some night crawlers and a bobber, and float the bait in the shallows.