When do Bluegill Spawn: Times, Seasons and Locations 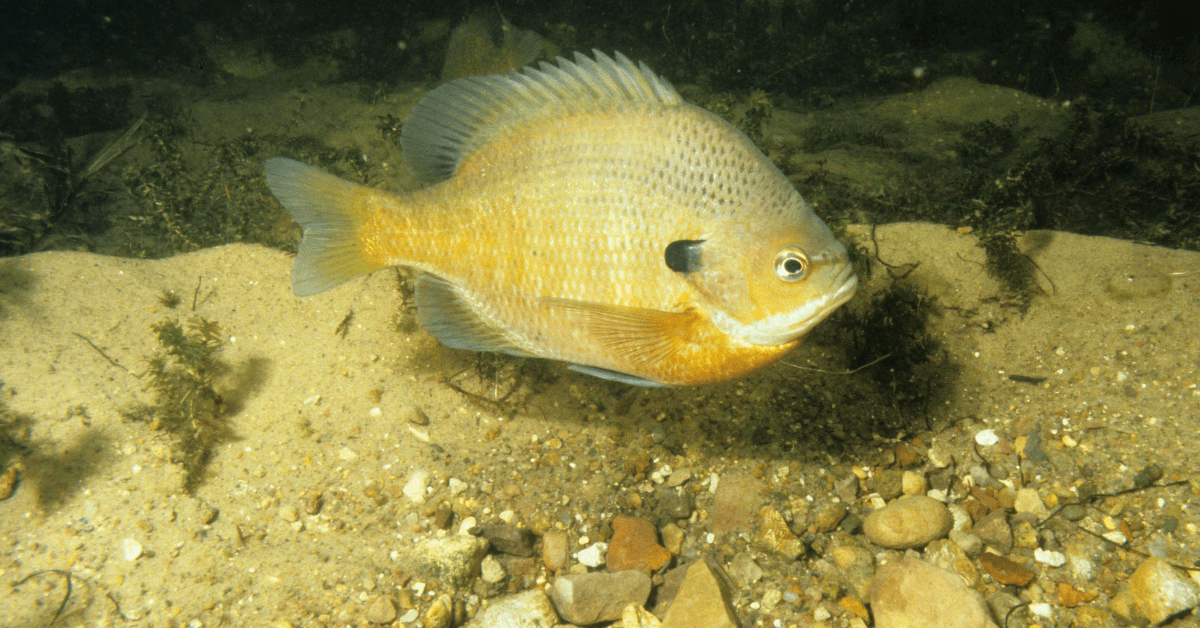 Bluegill are a very popular fish for both beginner and experienced anglers to target in shallow water of lakes and ponds. Not only are these nice fish beautiful to look at, but they can put up a very exciting fight on the end of the line. In addition, bluegill are delicious to eat and can be grilled, baked, or fried.

It’s not difficult to locate or catch bluegill during their spawn months, but the spawning time will depend on the water temperature. For northern states and Canada, the spawn season can be much later in the year than it would be for southern US states. Early spring may still be much too cold, so fishing in the late spring or early summer will be your best option.

In general, bluegill can spawn throughout April to August in North America, which is also a good time to catch these fish. The spawning behavior usually starts when the water temperatures reach at least 70 degrees Fahrenheit, but will stop when it’s warmer than 80 degrees Fahrenheit. High temperatures not only stress out the adult fish, but can kill the egg clusters and fry.

Throughout North America and Canada, bluegills spawn and will be most active in the spring and early summer months of April, May and June. But it’s also not uncommon to see some bluegill spawn behavior throughout the year depending on the exact location and natural climate in that locale.

Spawning season is normally defined by the water temperatures more than the month itself. If the winter was especially long and cold, spawning behavior may not be seen until May even if it was seen in April in previous years in that lake.

In southern states when the water temperatures are suitable for spawning behavior all year round, bluegill will most commonly spawn in the months of April, May, and June. When fishing for bluegills in shallow waters, it won’t be difficult to see spawning beds and bigger bluegills active well into August and even September in some cases.

Surefire signs of the spawning season starting up would include erratic behavior of the fish as they start to increase their feeding intake after the winter in preparation for the bluegill spawn colony. Big bluegills will be seen gaining bright colors in order to attract mates, and many anglers will start locating the spawning areas during this time.

Fish will start to move into shallow water in large numbers, and it’s not uncommon to see clusters of big bluegill actively building nests, courting females, defending nests, and more. Staying around heavy cover, fallen trees, or other protective vegetation is important for the health of the nest and small fry.

Since spawning behavior is dependent on water temperature, you won’t see bluegill doing any spawning behavior until the water reaches 70 to 80 degrees Fahrenheit. When the water is on the cooler end, males will use this time to locate their chosen nesting spot and create the actual nest.

Females will remain in deeper water until the temps get to around 72 or 73 degrees Fahrenheit before they start looking for a mate and suitable nest. Females will continue to lay their eggs in multiple nests until temperatures reach 78 degrees Fahrenheit or so, and will then move back into deeper water while the males remain behind to protect the nest throughout the early spring and summer months.

Eggs will hatch within 5-6 days and males will spend this time protecting the tiny fry as they learn to swim and find food on their own. Bluegill and other sunfish grow at very fast rates which is good for the population, as well as for other fish species in the area that feed on these sunfish.

They will feed on small crustaceans, insect larvae, and a variety of other aquatic insects. If you are are fishing for bluegill during this time, using red wigglers, night crawlers, dry flies (see our article on fly fishing for bluegill), garden worms, or other live bait can get your best results.

Where Do Bluegill Spawn?

Male bluegills will commonly hang around the shallows throughout the spawning season. They will first locate a suitable nest spot in water up to 5 feet deep and start marking out their little territory of spawning beds.

The bluegill spawn nest will be anywhere from 2 to 6 inches deep, and can span up to 24 inches wide. Creek channels, the shore area of most lakes, and pond banks with heavy cover are all great spots for colony nests to be constructed.

The best bluegill spawn area includes sandy shoals or pea gravel areas which make it easy for the bluegills to construct their nests. Once the nest is constructed, females will move into the area and start to select their favorite spot. The perfect nesting area will be shaded on sunny days to prevent overheating, especially for bluegill populations that spawn in the late summer.

Together both male and female bluegills will remain in this area throughout the egg laying phase. Since these fish are colony breeders, it’s not uncommon to see clusters of 50 or more separate nests in one compact area.

Bluegill spawn colonies will stay close to shore, and will intentionally look for areas with heavy cover on the bank. Overhanging trees, thick bushes, weed clusters, and other vegetation is desirable. Not only does this thicker cover protect the fish from being targeted from animals on the shore such as birds, but it also protects the nest from direct sunlight and potential overheating.

Accessing this area can be done in a small boat such as a kayak or canoe, which gives anglers easy access to some of the best bluegill fishing spots. Take your time when moving into the area since it will still be possible to scare fish away from their spawn area and nests, which can have a detrimental impact on the population for that year.

Fishing for bluegills can be exceptionally successful during the pre-spawn and post-spawn season. During the actual nest building and egg-protection phase, male bluegill will reactively strike at bait dropped right in front of their face, but normally won’t go searching for it.

Catching bluegills during the spawn season can be both productive and fun. These fish gather in large numbers and will go through phases of being very active in taking bait, and somewhat more suspicious of it. However, if you can get your bait down into their spawn beds, chances are good you can easily hook a few large adults without much hassle.

Tips for Catching Bluegill During the Spawn

While bluegills are very easy to catch during the spawn season, they can also be at high risk from natural predators as well as overfishing from eager anglers. That’s why it’s important to be conscious of fish populations in your chosen ponds, lakes, or other bodies of water.

During the spawn season, large adults should always be returned to the water quickly and safely. This not only includes females full of eggs, but also males. It’s the male bluegill that will maintain the nest and protect the fry, so his job in securing future generations is vital for ensuring the bluegill population in your area thrives.

When active in the spawn beds or in the shallows around them, bluegills will be very eager to take a wide range of bait and lure types. However, most anglers have the best luck with live baits including grubs, nightcrawler pieces, and crickets.

For artificial lures, small frogs and topwater swim jigs can get very quick and aggressive reactions from bluegills of all sizes. Larger bluegills will normally target the larger prey, but it’s not uncommon to see a large female bluegill strike at a chunk of nightcrawlers meant for a smaller fish entirely.