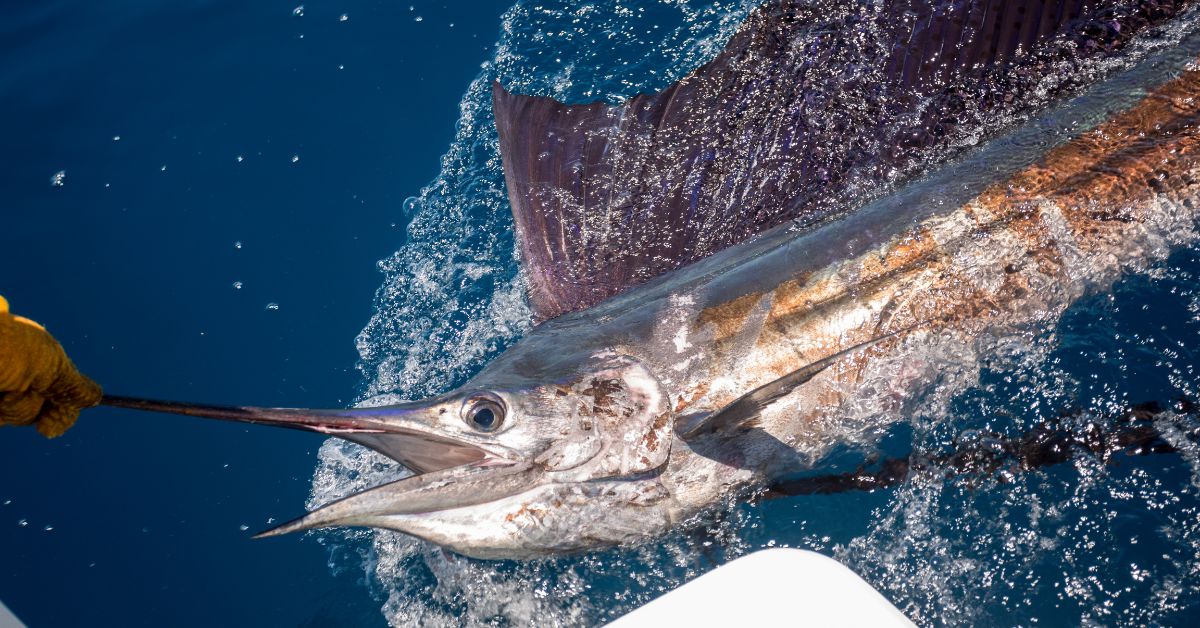 The Ocean is a big place, and it is no surprise that it is also home to some of the hardest fighting fish on the planet. In this post, we will take a look at some of the toughest fish that anglers pursue in the deep blue sea.

This list is chosen on the basis of the size, power and fighting ability of these game fish.

The blue marlin is one of the most sought-after pelagic sport fish species among offshore anglers.

The blue marlin spends its time in the deep sea and hunts for schools of baitfish. Anglers troll these deep blue waters using giant streamers, teasers, and divers.

When the blue marlin gets hooked up it typically puts on an impressive aerial performance and can wear anglers out using a serious burst of speed and swimming power.

The giant grouper grows to massive sizes and can weigh up to 600 pounds, with the record weight being 880 pounds.

The sheer size and weight of the giant grouper mean that anglers have to even the odds by using some serious leverage to fight the fish to the surface.

The giant grouper can typically be found around deep rocky reefs and outcrops, and anglers use live bait or vertical jig them to hook up.

The bluefin tuna is one of the most sought-after fish species on the planet.

Not only do they put up an incredible fight that will test the strength of any angler, but they also are worth their weight in gold on the seafood market.

The bluefin tuna has a wide body and is built for speed, this makes them a serious challenge for anglers to get to the boat, and requires heavy-duty gear.

The swordfish is a serious challenge to not only fight to the boat but to catch in the first place. This is due to the swordfish holding in very deep water during the daytime and requires the use of motorized reels, substantial amounts of weight on your rods, and patience.

During the evening and at night the swordfish can be found higher in the water column, and some anglers choose to target the fish during these times.

Due to being so deep, the fish must be fought and retrieved with hundreds of yards of distance to cover vertically, and due to the size of the fish, it needs to be done with motorized reels, as a human cannot maintain the strength and endurance needed to reel the fish in.

The giant trevally is a serious fighter that can be found in shallow water in the regions they call home.

The wide body of the fish and it’s large size with adults reaching well over 100 pounds, means that your arm strength will be put to the test.

The giant trevally is popular with anglers for the fight they produce, and also due to their abundance, with the fish being found commonly in many parts of the world.

Yellowfin tuna are very strong fighters known for putting up a serious scrap when hooked, and like other tuna species, the fish is popular for not only the fight they put up but also for being one of the best eating fish out there.

Like the blue marlin, the striped marlin is one of the most sought-after pelagic sport fish species among offshore and deep sea anglers.

The striped marlin like its’ blue marlin relative is known for showing powerful bursts of speed and massive leaps out of the water when hooked.

Like the other marlin and sailfish species, the striped marlin is very similar in most ways not only in anatomy and behavior but also in fighting spirit.

The wahoo is built, for one thing, for speed. It has a sleek torpedo-shaped body that allows it to reach insane speeds in short bursts.

Wahoo are typically found in the pelagic zones and are a prime target species among offshore anglers. They can also be found in schools of 100 or more fish if the conditions are right.

These fish can grow to be 6 to 8 feet in length, and due to their power and streamlined anatomy, they put up a serious fight for their size.

The tarpon has garnered the nickname “the silver king,” due to its large size, silver appearance, and fighting spirit.

The tarpon can grow to large sizes, with fish commonly caught well over 100 pounds, and they have a maximum growth of 280 pounds.

The tarpon holds a legendary reputation for jumping constantly when hooked, and they leap very far out of the water doing acrobatics which includes full mid-air flips and is one of the reasons for their popularity among anglers.

Sailfish are incredibly fast and maneuverable, and similar to the marlin in terms of a fighting fish.

The sailfish, like the marlin, is a pelagic fish that lives its’ adult life suspended over deep water and is the main target of many offshore anglers.

Sailfish love to leap from that water in explosive displays of power when they are hooked, and they can often be seen chasing down lures when trolled even at high speeds with their sails above water.

Albacore are similar to tuna in appearance, but are much smaller fish than most tuna species.

Don’t let the smaller size of the albacore fool you though. Pound for pound they are some of the hardest fighting fish in saltwater.

They are popular among anglers for their numbers and for making excellent table fare, and their fighting force is derived from their wide bodies and horizontally swimming during a fight.

With a smaller average size compared to many fish on this list, the roosterfish can still pack a serious punch for coming in at an average size of only 4 feet or less.

Roosterfish are very popular as table fare and are the main reason anglers target them, they are also abundant and can be found in great numbers.

Roosterfish have long curved dorsal fins on their backs which gives them a unique appearance compared to many other fish.

The yellowtail is a highly prized food fish and features white flaky meat, which is the reason it is popular among anglers.

Alongside the great table fare they make, they also put up a big fight for being so small, and their schooling nature along with abundance makes them a prime target.

The Yellowtail is also a very pretty fish, with bright yellow colorations on its tails and body giving them their name.

The king mackerel or kingfish are incredibly popular in both recreational and commercial fishing and are a main staple for the seafood market.

King mackerel have a very streamlined shape which makes them very fast in the water, and they can grow up to 30 pounds in weight.

They are schooling fish that can be found in both pelagic and shallow water, and fight like mad when hooked.

While considered by some anglers to be trash fish, the amberjack is one of the hardest fighting fish in their size class.

The Amberjack has the perfect body shape to make a hard fishing fish and is a wider yet streamlined body that creates some serious resistance to anglers when swimming and fighting.

The amberjack can grow to be pretty large, well into the 30-40 pound range, but most adults weigh around 10 pounds.

There you have it, our top 15 picks for the hardest fighting saltwater fish (see our guide to the toughest freshwater fish here), now the real question is, what one are you going to target first?