World Record Amberjack: A 163lb Giant of the Seas 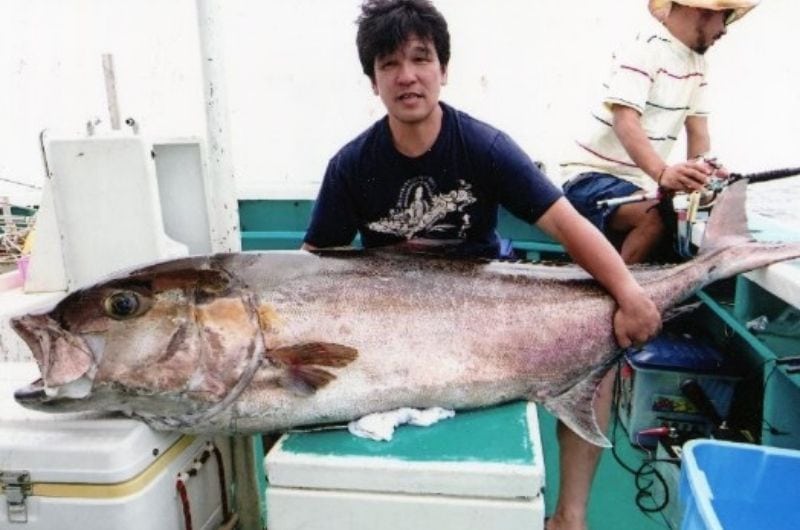 World Record Amberjack: A 163lb Giant of the Seas

Some world records have stood for a long time, while others have only recently been broken. One such fairly recent record is the one set in 2015 for the world record amberjack.

Any fish caught that weighs over 100 pounds is going to be an impressive sight to behold and the monster amberjack caught in 2015 to set the new world record is no exception to this.

In this article, we look at the details surrounding the record-breaking amberjack catch – a monster specimen of 163lbs 2oz – as well as some other amberjack-related world records, and some details about the species of fish itself.

According to the International Game Fish Association (IGFA), the world record amberjack was caught by Japanese angler Tadashi Yamanaka on 22nd June 2015.

At the time, Tadashi was bottom fishing with squid off the coast of Zenisu, Tokyo, Japan. He was using a custom rod, Shimano reel, and a YGK line.

Amberjack are known for being big fighters so, even if you do manage to get one to take your bait, you’ll still likely have a lot of work to do before you can successfully land the fish. When Tadashi felt the pull on the line, he was prepared for a fight, and the amberjack he would eventually catch was certainly prepared for one too.

After battling the giant amberjack for around 20 minutes, Tadashi and his heavy tackle gear finally prevailed and managed to get the fish out of the water and onto their fishing boat.

It was clear to see, just from looking at the fish, that it could be a potential record-breaker. Up until that point the world record was set at just under 158 pounds. Once weighed, it was confirmed that the amberjack Tadashi had caught was bigger than this as his catch weighed an impressive 163 pounds 2 ounces.

After waiting for his record claim to be approved, it was finally confirmed that Tadashi Yamanaka was the new world record holder and he still holds the title to this day.

The all-tackle length world record for amberjack is held by angler Glenn Bennett.

Back on the 17th of July 2011, Glenn was on a fishing trip in Key West, Florida, USA with his daughter and brother. It was on this trip that he caught the 140cm (55.12-inch) amberjack that would set the new length world record.

To land his giant amberjack, Glenn was using a custom rod, Shimano reel, and a PowerPro line baited with pinfish. Like Tadashi Yamanaka, Glenn was bottom fishing when he made his biggest catch.

After being photographed and measured, the fish was subsequently released back into the water.

An interesting point about this record is that Glenn’s family is not shy when it comes to IGFA records. His daughter Brielle also holds records of her own (and caught some potential record-breakers on the same trip as her dad).

What can be better than a father-daughter fishing trip where you both end up with world records in your name?

On 28th March 2022, angler CJ Peppe was fishing in Tarpon Springs, Florida, USA. It was here that he successfully caught his world record fish.

The fish in question measured in at 93cm (36.61 inches). At the time of the catch, CJ was using a Hardy rod, a Pflueger reel, and a Cortland line with a Pistol Peppe lure.

Amberjack (Greater Amberjack) have a wide distribution in subtropical and tropical seas and oceans all around the world. In the indian ocean, they can be found along the coast of southern and western Africa all the way through to the Persian Gulf, western Australia, and southern Japan.

In the western atlantic ocean, amberjack can be found near Bermuda and on the coast of north America up to Nova Scotia and as far south as Brazil.

Amberjack can also be found in the eastern atlantic ocean.

It’s said that adult greater amberjack can weigh up to 200 pounds but most will be no more than 40 pounds.

These big fish can live up to 17 years so it makes sense that some can get truly monstrous in size. It’s usually the females that are bigger than the males and they commonly live longer too.

Greater amberjack reach maturity at around three to four years of age. They primarily spawn between March to June on shore reefs and shipwrecks.

Adult amberjack eat crabs, squid, and other fish that can be found on reefs. When amberjack are young, they tend to feed on plankton, including crustacean larvae and other small invertebrates.

Are Amberjack Good to Eat?

Yes, amberjack are a great eating fish. They are commonly served as sushi in Japan, but can be prepared in any number of ways. Their firm, slightly sweet and mild flavoured flesh can be enjoyed as grilled filets, in a curry or any other type of preparation you prefer.

These fish tend to like depths of around 250 to 300 feet so you’ll likely need to head out into deep water to land the really big specimens. Although they can be caught all year round, spring and fall will probably be the most successful time to go on an amberjack fishing trip.

You’ll need strong fishing gear to handle the fight amberjack will give you so this is a key part of successfully landing amberjack.

Bottom fishing is a good choice as these fish like deep water although they can sometimes be found closer to the surface at certain times of the year. During the summer, most amberjack will be deeper while in the winter, they tend to be found in a little shallower water.