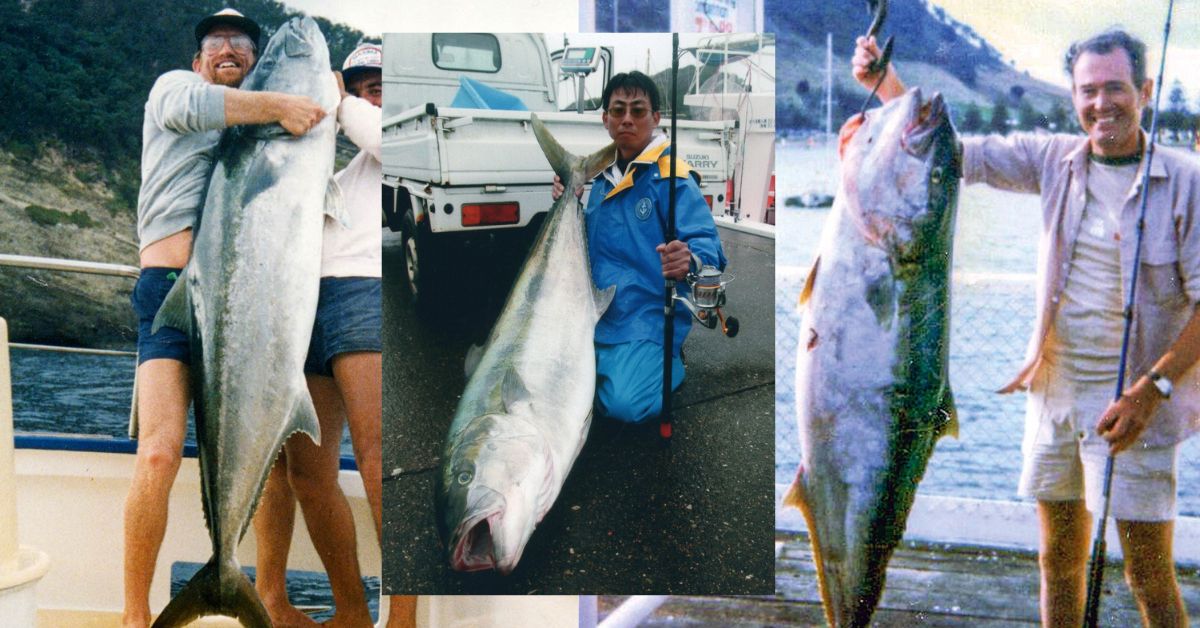 If you like your fishing world records to include some truly big fish, then the world record yellowtail (Seriola lalandi) is one that you will really enjoy.

Yellowtail can be found in several places around the world (they are known as Yellowtail Kingfish in Australia and New Zealand) and have yellow colorings on their tail and along their bodies. They have lots of teeth and a large, spikey dorsal fin that runs a good length down their body. Not to be confused with yellowfin tuna, yellowtail can grow to some monumental sizes, and every now and again, one that seems unbelievably big is caught on a successful fishing trip.

Any fish that weighs in at over 100 pounds is an impressive sight to see. Any angler that can successfully catch a fish weighing more than 100 pounds is arguably even more impressive. In this article, we look at some of the details surrounding the truly monstrous world record breaking California yellowtail catch, as well as some other records relating to yellowtail too.

Yellowtail are a great eating fish too. They are delicious as grilled fillets, sushi or sashimi or in Asian style curries.

The current world record for California Yellowtail is held by Masakazu Taniwaki who caught his giant fish on 24th October 2009.

His catch, which turned out to be the largest yellowtail ever caught, weighed in at 109 pounds 2 ounces. Masakazu smashed the previous world record which had stood for around five years. The previous record for California yellowtail was 92 pounds so this goes to show just how impressive this giant fish actually was.

The fish that Masakazu Taniwaki set the record with measured 61.81 inches in length too. If all of this wasn’t unbelievable enough, the angler actually landed the monster fish in just 12 minutes! The fight may have been fairly short but it would have no doubt been a tough one.

There are currently two tied record holders for the southern yellowtail record. The joint world record is set at 114 pounds 10 ounces.

One record holder is angler David Lugton who caught his giant yellowtail at White Island, New Zealand on the 9th of January 1987. He was using his Kilwell rod, Penn 114 HL reel, and Erskine line.

The joint record holder is angler Mike Godfrey who landed his yellowtail in Tauranga, New Zealand. To land it, Mike was using a Kilwell rod, Penn 114-H reel, and Amilan-T line.

Considering this record was set and tied in the 1980s, it seems to be standing up to the test of time with no one being able to break it for several decades. 114-pound fish really are monstrous so the fact that two have been caught is something that both anglers will likely be extremely proud of.

Some other impressive yellowtail-related records include the 30-pound line class record set by Kevin Pfeif in August 2004. Kevin landed a yellowtail weighing 92 pounds 1 ounce on Guadalupe Island, Mexico. When it was caught, the record-breaking yellowtail measured in at 63.75 inches in length and had a girth of 33 inches.

It’s not just male anglers who are catching world record setting yellowtail either. Take female angler Renee Shoberg, for example, who set the women’s 30-pound line class record with her 48-pound catch. It took Renee just 14 minutes to reel in the record fish after it struck a Zukar lure she was trolling from her boat in Mission Bay, San Diego, California, USA back on the 11th of August 1991.

Another huge yellowtail caught by a female angler is the holder of the women’s 50-pound line class record. This world record is held by Agnes Jones who caught a 56-pound 9-ounce fish in Alijos Rocks, Baja California, Mexico. This world record has stood since 10th April 1988 so is definitely one that looks to be very difficult to beat. To catch her weighty fish, Agnes used a Kunnan Model HR5980C rod, Penn International 50 reel, Ande line, and sardine as bait. Not only was this yellowtail over 56 pounds but it was also 52.25 inches in length and had a girth of 23 inches.

Alijos Rocks, Baja California, Mexico seems to be a good place to be if you are fishing for some large yellowtail. On 12th November 1998, angler Brian Buddell set the 50-pound line class record with his catch that weighed in at 80 pounds and 11 ounces. At the time he set the record, he was using a Calstar 610 rod, an Accurate 30 reel, and an Izorline mono line baited with sardine.