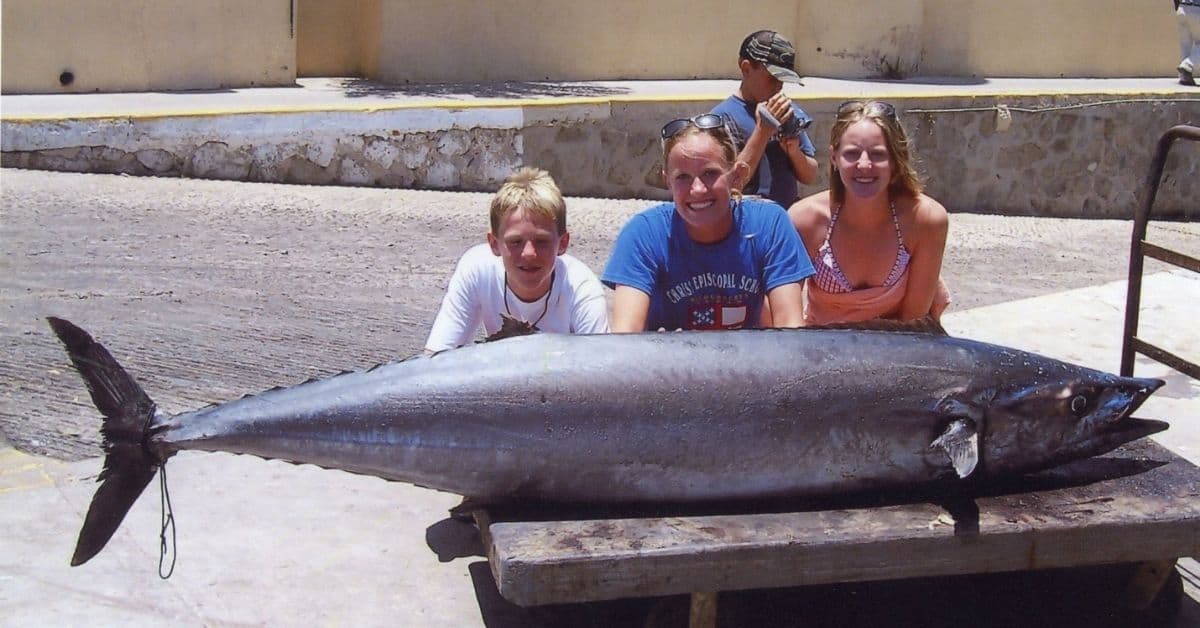 There have been several female world record holders relating to Wahoo with some truly monstrous fish being caught. From Mrs. A. D. Crowninshield with her 110 lb catch back in 1941 all the way up to the current all tackle record set in 2005 by Sara Hayward with her catch weighing in at 184 lbs.

World records seem to be broken on a regular basis so the fact that the world record for largest Wahoo caught has stood for a while shows how big Sara’s catch actually was.

In this article, we take a look at the current world record in more detail as well as looking at the Wahoo species in some detail too.

On 29th July 2005, Sara Hayward set out on what would end up being a world-record-setting fishing trip in Cabo San Lucas, Mexico.

At just 15 years of age, Sara was on board the Pez Espada II when she used a Mean Joe Green vinyl-skirted lure to land the monster fish.

After spending several hours on the water, Sara, her dad, and the ship’s captain were heading back to shore trolling several lures while doing so. After Sara realized something had taken the lure on her Shakespeare rod, she began to try and reel it in.

It took an impressive 45 minutes of fighting with the oversized Wahoo before Sara saw the size of what she had been doing battle with for almost an hour. In what could be considered a massive understatement, when Sara first laid her eyes on the fish in the water she announced that “he’s big!”

Getting the fish out of the water was a challenge but once it was safely onboard, everyone knew it was a potential record breaker! In fact, the captain even got on the boat’s radio and told everyone that they were coming back in with the biggest Wahoo anyone had ever seen – as it turns out, he was correct!

With the official world record weight of Sara’s catch being confirmed at 184 lbs (83.46 kg), Sara also has the honor of saying she has successfully landed a fish that weighs substantially more than her. When she caught the fish, Sara weighed around 130 lbs – more than 50 lbs lighter than the 184 pound Wahoo she had fought with for close to an hour!

The 20lb line class Wahoo World Record belongs to the angler Leo Barboza. He managed to catch a 115 lb (52.16 kg) Wahoo in the Atlantic Ocean off Bermuda. He used Robin Scad and a Montague glass rod.

Leo set this record back on 2nd July 1961 so this is a very longstanding record.

On 2nd June 1994, Dean Ettinger set out on a fishing trip in Buena Vista, Baja California, Mexico. This would be the trip when he would land the 30 lb line class Wahoo record of 127 lbs (57.60 kg) and get his name into the record books.

Keith used a live mackerel to catch this 70.5-inch giant.

The International Game Fish Association describes the Wahoo as a large fish that tends to travel alone or as part of a small group of around two – six fish. That being said, if the conditions are right, schools of around 100 Wahoo or more are possible.

It’s known for being one of the fastest fish in the sea as it can travel at speeds of up to 50mph.

Wahoo can hold their own against some of the largest fish out there too, with their fast growth taking some up to over eight-feet in length.

Wahoo can be found in the Atlantic, Pacific and Indian oceans.

They can be found in the summer months off the Pacific coasts of Panama, Costa Rica and Baja California. In winter and spring they can be seen off of Grand Cayman (Atlantic), and off the western Bahamas and Bermuda in the spring and fall.

The International Game Fish Association records that the largest Wahoo ever caught was a 184-pound Wahoo caught in Cabo San Lucas, Mexico.

Wahoo can grow up to over eight-feet in length and this growth can happen very quickly so they are certainly a large fish!

Wahoo can be found around wrecks and reefs as this is where the smaller fish that it feeds upon are most abundant.

Sometimes Wahoo can jump and they are known to shake their heads violently in order to get free if it finds itself hooked.

As Wahoo are so fast, they can quite easily peel off hundreds of yards of line in just a few seconds so they can be particularly fiesty to catch.

Trolling with whole, rigged baits can be effective when fishing for Wahoo. Strip baits or artificial lures can also work well.

Fishing with live bait is probably most effective as this best simulates the natural feeding behaviors of the fish.

With all this in mind though, it’s worth noting that Wahoo are usually caught accidentally while fishing for other oceanic species such as Yellowfin Tuna, Goliath Grouper, Striped Marlin, and Black Marlin.

The flesh of Wahoo is held in high regard in many cuisines as it has a sweet, somewhat delicate feel to it.

In terms of taste, Wahoo is said to taste not too dissimilar from mackeral so Wahoo is considered a premium fish and very tasty to eat.