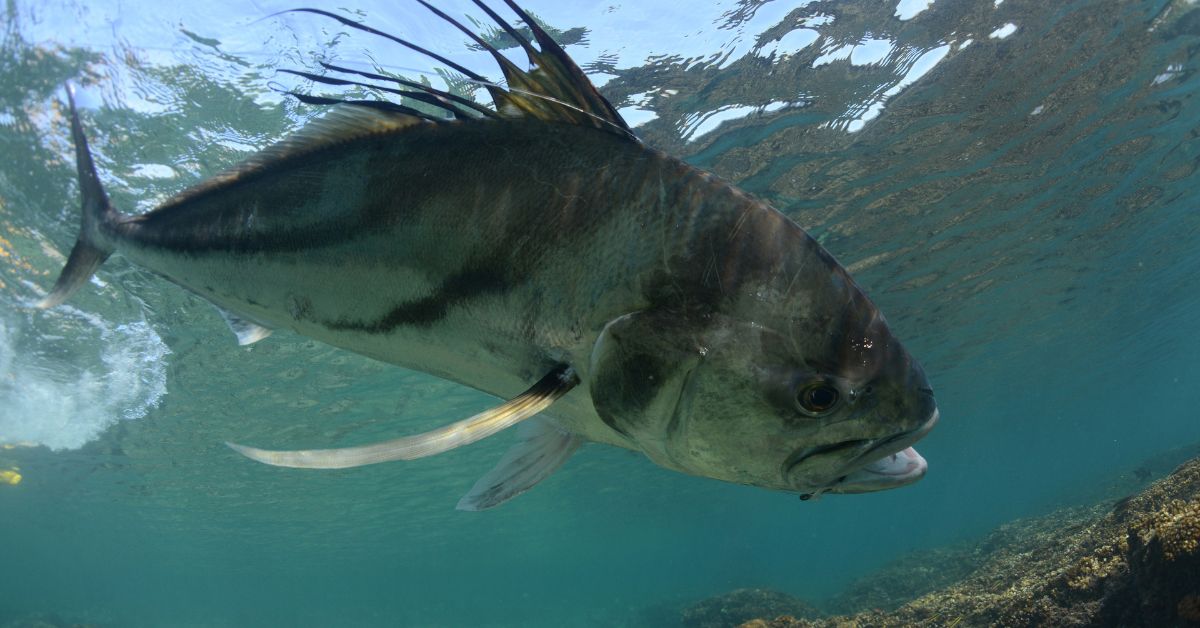 Roosterfish, with their comb like dorsal fins, are one of the most interesting fish in the ocean.

A member of the jack family, they are a highly aggressive fish and can often ben seen chasing baitfish and “herding” them right up on the beach.

Although roosterfish reach up beyond 100lbs in weight, anything over 50lbs can be considered a trophy roosterfish.

The Biggest Roosterfish Ever Caught

The official All-Tackle Record roosterfish was caught off La Paz in Mexico’s Baja California in 1960 by angler Abe Sackheim.

The huge rooster – which measure 136cm in length – was caught while trolling and tipped the scales at 114lbs. The fish was almost as long as its captor was tall!

Baja California is the epicentre of roosterfish fishing and the place to go if you are looking to set a world record by catching a huge rooster. La Paz is arguably the roosterfish capital of the world. While they are also taken off Panama, Peru and Costa Rica, most of the line class records for Roosterfish are fish taken in this part of Mexico.

The IGFA All-Tackle Length record for fly fishers was set very recently in August 2021. This 132cm roosterfish was almost as long as Sackheim’s 1960 fish.

Angler Richard H Rygg caught the massive roosterfish at Cerralvo Island, an uninhabited island off the east coast of Baja in the Sea of Cortez.

Roosterfish (Nematistius pectoralis) are found in the eastern Pacific Ocean from the Gulf of California to Peru. Roosterfish love to feed in the surf zone of beaches making them an attractive target for lure and fly anglers.

The distinctive dorsal fins of the roosterfish normally sit in a deep groove along the fish’s back, but they rise up when the fish is excited and chasing its prey.

Roosterfish have two dark blue or black curved bands on the flanks.

One of the best ways to catch roosterfish is using fly tackle off the beach. Anglers cast into the surf zone to sighted roosterfish. This makes for spectacular action and is captured really well in the fly fishing movie Running Down the Man. This movie by guide Grant Hartman also offers a fantastic glimpse into fly fishing for the largest roosterfish.

Lure fishers can also get in on the action with poppers and jerkbaits often attracting roosterfish off the beach.

Some anglers have success trolling lures close to shore but behind the breakers.

Another way to catch roosterfish is with live bait.