World Record Rainbow Trout: Where, How & Who Caught It 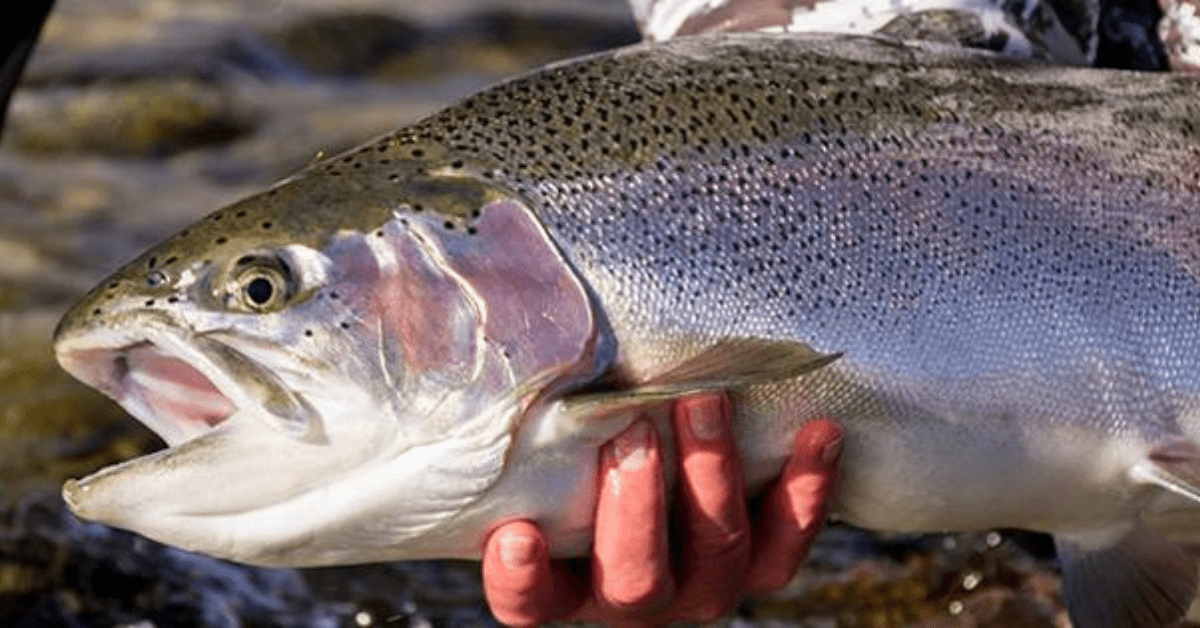 Rainbow trout are one of the most popular freshwater gamefish in the world and are pursued by anglers across North America and many other parts of the world including Argentina, Russia, Japan and New Zealand.

But it is Canada that holds the current record for rainbow with a specimen of nearly 50lbs caught in 2009.

In this article we’ll explain the controversy behind that Canadian stonker and detail some other massive rainbow trout captures.

Lake Diefenbaker in the province of Saskatchewan in central Canada is arguably the epicentre of record rainbow trout catches.

The current IGFA record fish of 48lb was caught in the waters of this large lake by local mechanic Sean Konrad and even ESPN covered the catch.

And the previous world record for the biggest rainbow trout, a fish of 43lbs taken two years earlier, was caught by his identical twin brother Adam.

And if that’s not bizarre enough, the capture of the larger fish kicked off a controversy over whether this triploid rainbow – one of a number of escapees from fish farm pens – could be truly considered a rainbow trout given they are genetically engineered to be sterile and show incredibly rapid growth rates.

The conjecture over the fish even saw NPR Radio weigh in on it airing an interview with Sean in which he told the broadcaster the genetic quirk (a third chromosome) sometimes occurs in nature too and it was not up to him to account for how the fish got in the lake.

Both these giants were caught at night with the 48lber – still the largest rainbow trout in the record books – taking a Rapala X-Rap and the 43lder a spoon.

The twins told ESPN they can only fish Lake Diefenbaker at night because if they fish during the day they get pursued by other anglers hoping to exploit their ability to track down these monster triploid rainbows.

The two brothers have certainly got the method for catching these giants dialed in and they estimate they’ve caught more than 300 fish over 20 pounds and a good number over 30. They live in hope of nailing a 50lber.

Rainbow trout are native to cold-water river catchments flowing into the Pacific Ocean in Asia and North America.

The rainbow trout gets its name from the bright pink stripe on the fish’s side that extends right up to its cheeks.

Rainbow trout are a popular target for fly fishing afficionados and lure fishers in both lakes and rivers as a sportfish and for eating.

The sea-run, or anadromous, version of the rainbow trout is known as the steelhead and is a prestigious angling target in its own right.

While the 48lb fish from Lake Diefenbaker is unquestionable the world record rainbow trout, there have been massive rainbow trout in a variety of other places, some of which we’ve described here.

The US has also got some great trophy fishing for rainbows with the most notable recent capture being that of angler Brett Jones, who caught a 31.25-inch rainbow trout while fishing at American Falls Reservoir in 2020.

The fish, which was released, was recognized as a state record.

New Zealand is better known for its superb brown trout fishery, but it also produces some huge rainbow trout including a 29lb specimen caught Lake Ruataniwha on a fly rod.

You can see more on fly fishing for huge rainbow trout in New Zealand in this episode of the wonderful Pure Fly series, which is now available on YouTube.

This episode is set in the hydro canals of the Mackenzie Country in the center of the South Island of New Zealand where a kind of cult fishery has emerged targeting supersized rainbow and brown trout.

The size of these immense fish is down to them feeding in canals that are home to pens of King Salmon grown commercially for food. These excess feed from the salmon pens filters down the canals to the waiting rainbows and browns, which grow to enormous sizes and are eagerly targeted by fly and lure anglers.

Remote Patagonia is home to an incredible fishery called Lake Strobel. This lake is literally in the middle of nowhere situated in the Patagonian steppe seven hours’ drive from the nearest town of significance, El Calafate (although at least one lodge now has a private airstrip allowing for anglers to fly from El Calafate).

Also known as Jurassic Lake, this windswept remote place is renowned for its exceptional rainbow trout fishing with huge numbers of fish over 10lbs and many approaching 20lb.

The lake is pretty much surrounded by private property so there is really no option to fish it DIY.

The cold water of Lake Strobel is filled with huge numbers of rainbow trout feeding on scuds and other aquatic insects. Thanks to this ample food source these fish have an incredible growth rate and are present in huge numbers. These giant trout can be caught by stripping wet flies and sometimes on dry flies too.

See also: Record brook trout and where to find them

It’s not as famous as New Zealand or Argentina among international anglers, but Japan is home to some great fishing for rainbows and these are big trout too.

The northernmost island of Hokkaido is the place to go to tangle with these fish. Fishing small streams in summer with terrestrial fly patterns will get fish of up to 25 inches, but the really big ones are caught by swinging wet flies in rivers such as the Teshio.

Steelhead, or anadromous rainbow trout, can grow to huge sizes. Admittedly not the record breaking dimensions – in terms of weight anyway – of the freakish Lake Diefenbaker fish or even the canal trout of New Zealand.

Steelhead records across various classes of angling are all around the 30-35lb mark and pretty much all these fish have come out of British Columbia in Canada, home to arguably the best steelhead runs in the world in the Skeena River drainage.