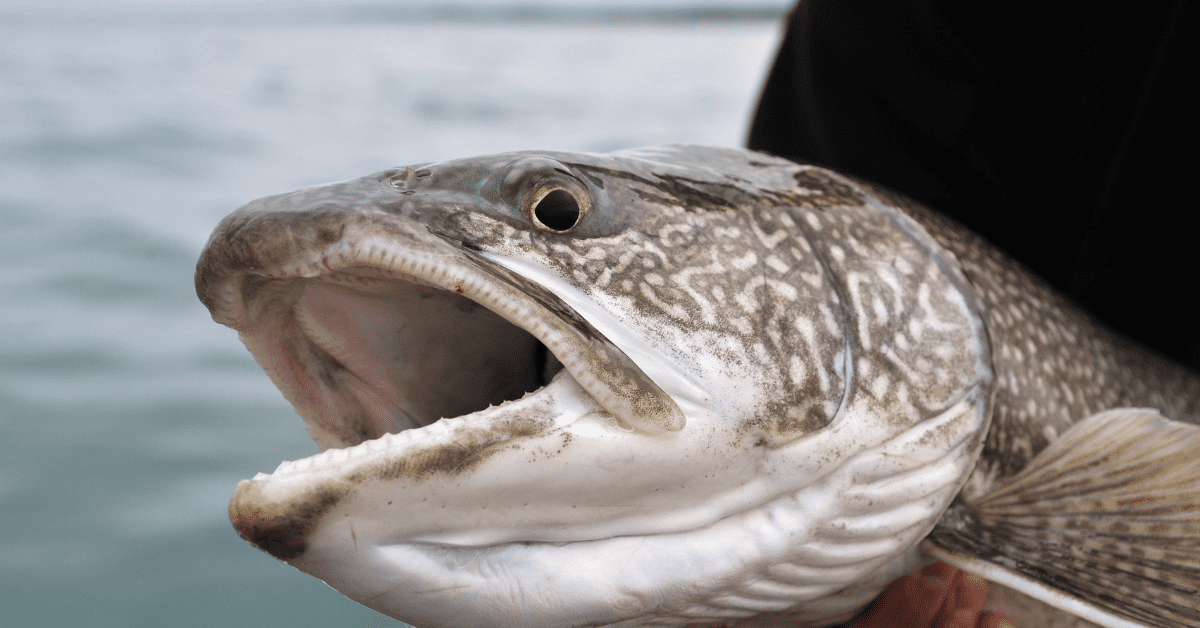 Lake trout are among the biggest of the trout species. They are also one of the most interesting – they are predatory, mysterious, huge and hard to catch.

Fishing for lake trout is a passion for many anglers and an obsession for some.

Let’s take a look at some record specimens of these bottom-dwelling bruisers.

As we explain, two of these predatory monsters were caught in the very same lake in Canada’s remote Northwest Territories!

The current IGFA all tackle world record for Lake Trout is 72 pounds. That’s the biggest lake trout caught on a line that has been recognised by the International Game Fish Association.

This massive lake trout was caught in 1995 by angler Lloyd Bull, a regular visitor to Great Bear Lake in this artic region, which is famous for its enormous lakers. Information on the capture of this official world record is hard to come by, but it seems it was caught trolling by this experienced and passionate angler.

As guide Craig Blackie says in this article, which references this record lake trout and also mentions an “unofficial” world record fish of 74 pounds, Great Bear Lake is known for having the world’s largest lake trout.

What’s thought to be the world’s largest lake trout, a massive fish of 83 pounds, was caught on the opposite side of Canada’s Great Bear Lake to Lloyd Bull’s capture.

But this fish isn’t in the IGFA world record books as it was caught in a gill net (IGFA record fish have to be caught with a rod and reel).

The mammoth lake trout caught by members of the Deline First Nation and would have smashed the current world record for lake trout had it been caught with a rod and reel.

But the big bottom dweller was found in a gill net the Deline First Nation members had put out as part of their sustenance fishing (fully legal) fishing activity, according to guide Brandon Isaac.

According to media reports, the Deline First Nation community tried to revive the fish when they found it in the gill net in order to release it but were unable to.

How to Catch a Record Laker

Blackie, who guides out of Plummer’s lodge on Great Bear Lake in the Northwest Territories, gives a lot of detail about the best time of year to catch record lake trout and how and where to target spawning fish. While guests at the lodge are better place than anyone to target a world record lake trout, it is not easy and anglers need to know there is no substitute for time on the water.

“A useful calculation to consider is the number of hours needed to catch a 50 pounder,” Blackie writes on the lodge website.

“It turns out that a 50 pounder (or better) is caught at anywhere between 1000 and 1500 hours of fishing time (depending on which year you looking at) which is obviously much greater than the 50 to 80 hours put in by most guests in a week. Be realistic- chances are you won’t catch a 50. Nevertheless, a trip to Plummer’s on Great Bear Lake gives you the highest odds in the world of catching that true giant.”

Great Bear Lake, according to the lodge, is only fished by 300 anglers every year.

It is the fourth largest lake in North American and sits in the arctic circle right on the tree line hundreds of miles from the nearest town and the lodge operates as a fly-in fly-out fishery that anlgers can only visit for a limited part of the year.

The Utah Division of Wildlife Resources said the fish broke the long standing (since 1988) state record, which was a 51 pound lake trout also taken from Flaming Gorge in 1988.

The 2020 fish was caught by Chance Scott, of Utah, and was kept for eating.

Intriguingly a commenter on the post announcing Chance’s capture posted this picture of what appears to be an even larger fish.

It’s hard to estimate the weight, but on looks alone, this mystery lake trout posted by Ronald Witzke looks like it would give the existing world record a shake.

Nothing is known about this fish – other than the angler who caught it released it – and whether it could have been a new world record.

Canada’s record of producing trophy lake trout is unchallenged. While hard to verify, there have been reports of a lake trout over the magic 100lb mark being taken.

This huge specimen was taken in a commercial gill net in 1961 in Lake Athabasca in the northwest corner of Saskatchewan in Canada, considered by many as the greatest lake trout fishery in the world.

Lake trout (salvelinus namaycush), despite carrying the moniker “trout” (see our guide to trout species here) are actually a species of char – a relative of the artic char, dolly varden, brook trout and the bull trout. They are also known as lake char or mackinaw.

Unlike most other trout and char species, lake trout are almost exclusively bottom dwelling fish and sit at the top of the food chain in the depths of many lakes in North America.

Because of this, trolling lures such as spoons behind a boat is a popular way of fishing for lake trout. Fly fishing for them requires sinking lines. Jerkbaits and jigs are other ways that anglers try to reel in a big lake trout.

Ice fishing for lake trout is also a popular and effective way to catch them.

The most famous lake trout fishery is Great Bear Lake in Canada, which, as we have explained, is the home of the current world record capture.

While lake trout are native only to North America, there isolated populations outside of this region. In Japan, Lake Chuzenji near the historic town of Nikko has a lake trout population. Japanese anglers enjoy fishing for this elusive but huge char species.

While not as large as those in Great Bear Lake, there are some huge specimens caught in this deep lake and maybe a new world record could be set one day in Japan (see here for more info on fishing for giant trout species in Japan).