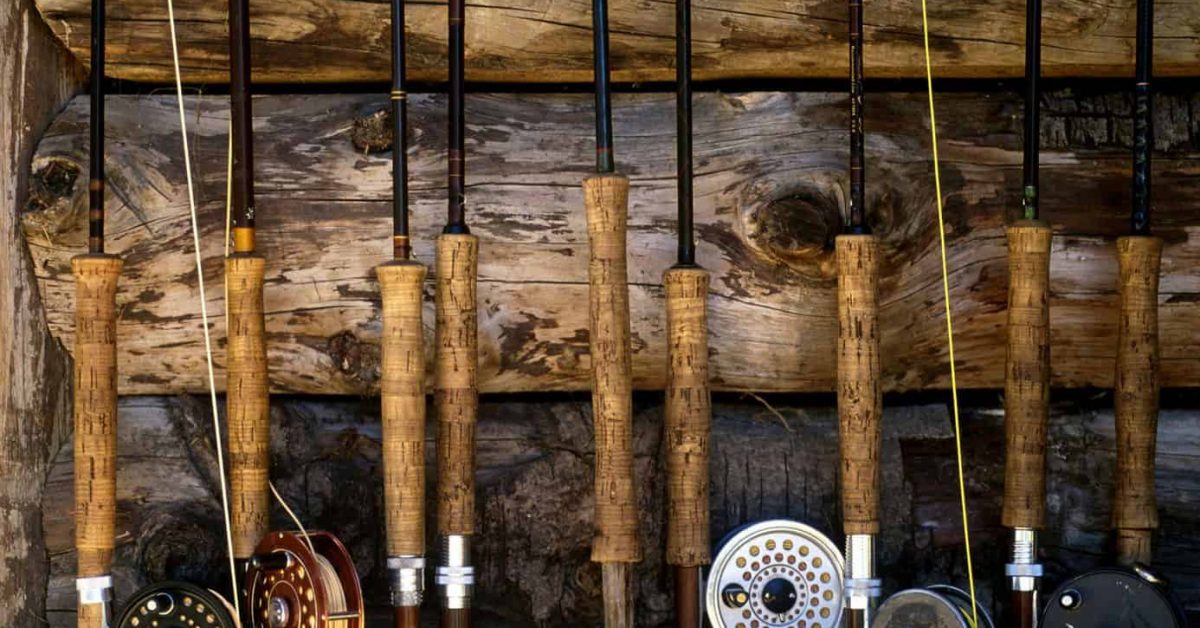 Mention steelhead to a room full of anglers, and you’re sure to receive as many different responses as there are people. Everyone has an opinion on, story about – or both – steelhead fishing, and anglers as a rule aren’t shy. We love sharing our opinions.

If you’re wading into the world of steelhead fly fishing, you’re probably overwhelmed by the sheer amount of discourse on the topic. For a fish that’s so endangered, and of which so few wild ones are caught each year, the debate on gear and tactics is fierce.

So, today we’re going to break down everything you need out of a good fly rod for steelhead.

Click this link for our guide to choosing a fly rod and here for the best fly rods for trout.

Best Steelhead Fly Rod: Our top picks in each category

The Sage X is one of the best fly rods on the market, and in a 10′ 7-weight, it’s a fantastic single-handed rod for steelhead fishing. The key to success with steelhead when you’re using a single-handed rod is to have something that’s powerful, but still delicate enough to detect subtle eats. That’s why a 7-weight is such a great fly rod for steelhead. Add the 10 feet of length, and you have the perfect stick to chase these fish with.

Douglas has been making stellar fly rods for years, and the small company’s work is finally starting to pay off in spades. Their rods have won plenty of awards and accolades, and all of them much deserved. Their DXF line of fly rods is economically priced, casts like a dream, and still allow you to do what you need while on the water.

Winston makes some of the best fly rods on the planet. Their Boron III TH Microspey, in an 11′ 4-weight configuration, is no exception. It regularly tops lists of favorite steelhead fly rods around the internet. It’s got that classic Winston feel, while sporting the backbone of a true spey rod.

What to consider when choosing a steelhead fly rod

The biggest difference between steelhead fishing and “regular” trout fishing is the tackle used. Since steelhead tend to live in big, wide, deep, and fast rivers that drain into the Pacific Ocean, your usual 9′ 5-weight trout rod won’t get the job done. You need big, long rods in heavier line weights that can easily cast 100 feet or more. This allows you to swing flies through runs where steelhead are likely to hold. e

With that said, there are different types of steelhead fly rods. Let’s take a look at the different fly fishing rods you can use for chasing steelhead.

Single-handed fly rods are what most folks are familiar with when they think of fly fishing. The best single-handed fly rod for chasing steelhead is going to be a 10-footer, in a 7-weight. This gives anglers the reach they need to make extra long roll casts, and the backbone to wrangle in larger fish.

Steelhead fly fishing with a single-handed rod isn’t something you’ll see often, but if you’re on a smaller piece of water, it’s a fantastic choice. You’ll also find that this type of steelhead rod can easily be used for other fly fishing applications, too.

One-handed fly rods are best for fishing steelhead on smaller waters. Some tributaries to major steelhead rivers are small enough that a rod like this is the way to go.

Switch rods are meant to be fished as either a true spey rod, or as a traditional trout rod. You can switch between fishing overhand casts, or making spey casts. The versatility of a switch rod has led tons of anglers to adopt these, because it allows you more flexibility for presentations while out on the water.

Switch rods are best for folks who want to chase steelhead on the fly, but are also interested in using more traditional fly fishing techniques. A switch rod allows you, within reason, to go between accepted norms for steelhead fishing, and traditional tactics with which you might be more familiar.

Spey rods are built for one thing, and one thing only – the spey cast. This type of cast is one of the most beautiful you’ll see in all of fly fishing, and spey fly rods are works of art, too.

If you’re chasing big steelhead in big water, you want a spey rod. Nothing really compares to how well a finely-tuned steelhead fly rod will act and react while you’re doing battle with the potential fish of a lifetime.

Spey rods are best for folks chasing steelhead and salmon in large rivers, especially in the Pacific Northwest. There are very few Western rivers where the length and power of a spey rod is necessary to put trout in the boat.

With steelhead, there are two main runs (similar to the ‘runs’ we see from salmon). Steelhead return to streams to spawn either in the winter or summer.

The major difference in the two – aside from the obvious – is that summer steelhead tend to be a bit smaller. They also enter streams up to a year before they’re ready to spawn. They’ll return from their time in the ocean and set up shop in freshwater to finish growing before they make a push for the spawning grounds.

Winter steelhead, however, enter rivers ready to go. They come in from the ocean fully mature, and sometimes they’ll spawn within days of reaching freshwater.

In terms of how this affects your fishing, all you really need to consider is the size of fish you’re chasing. Winter steelhead are often in the 12-20lb category, but summer steelhead don’t typically grow as large.

Type of water and angling style

Chasing steelhead on a fly rod takes you to a variety of waters, and demands different tactics for effectively fishing them. Let’s take a look at a few of the different water types you can expect to encounter, and how to get your flies where the fish are likely hanging out.

The fly fishing method most often associated with steelhead fishing is swinging streamers. Anglers make a long, arcing cast upstream, follow the streamer through a run, take a few steps upstream, and repeat. It’s a methodical, but effective, way to cover water.

You can present nymphs in much the same way streamers are presented – on the swing. The only difference is likely what fly rod you use when doing so. Nymphing for steelhead usually involves garish egg patterns.

This is the quintessential location for chasing steelhead – big rivers that force their way through dramatic landscapes. In these rivers, you’ll be standing on the bank or in a drift boat, working each piece of likely water. You’ll work it more thoroughly than you would if you were simply trout fishing. Steelhead can be notoriously tough to catch, and sometimes it’s more about persistence than anything else.

On streams, you get to pull out your traditional fly rod. Here, you’ll be fishing the same streamers or nymphs as you would on a larger river, but you’re doing it on a trout-sized scale.

In the steelhead world, there are almost more line options than there are fly choices. We’ll briefly look at them here.

When chasing big fish on a spey-style fly rod, you’ll have two main options for lines – Skagit or Scandi. Both are floating lines, and both achieve different things.

Skagit lines are designed to throw large, heavy flies into the wind. They have a short, compact head that allows for large, arcing casts.

Scandi lines have longer heads and more graceful tapers, and are usually used to throw unweighted flies with sink tips.

Full-sink lines are generally only used if you’re really in need of getting down deep. They’re generally not used for spey fishing.

Sink tip lines are the preferred fly line for both Skagit and Scandi-style fishing. A sink tip allows for the ease of casting and mending a floating line, but also the ability to get flies down deep to where fish are likely holding.

The Sage X is one of the best fly rods on the market today because it’s quick, light, and accurate. It also sports some amazing backbone, and has the delicacy to tackle a variety of fishing situations.

In a 10′ 7-weight model, the X is a fantastic tool for chasing steelhead. You get a rod that has the ability to present flies in the spey or traditional style, and still be effective on trout, too.

Douglas makes some of the best fly rods I’ve ever used. Their DXF fly rod series is among the best mid-priced rod family I’ve ever seen.

The DXF in a 10’6″ 4-weight gives you the true spey experience, but also allows you to use it as a traditional fly rod. This definitely falls into the “switch” rod category, and you won’t be disappointed when using it for multiple species, sometimes on the same trip where you chase steelhead.

If you’re picking a rod based on beauty alone, then the Winston Microspey wins by a wide margin. This is one of the prettiest fly rods I’ve ever seen, and Winston makes each fly rod by hand in their factory in Montana.

Winston combines their classic action with the needs of the spey angler. This rod will throw Skagit rigs across the river, but has the sensitivity to detect even the slightest bite in big water. Additionally, the rod’s backbone will surprise you.

Scott follows closely on the heels of Winston with this rod. It’s a gorgeous piece of work, and while a 15′ 10-weight rod might feel unwieldy at first glance, this is the perfect fly rod for really big water. When you need your fly rod to cast 125 feet upstream to the opposite bank, the Scott Radian will deliver.

The Radian is also the most popular rod in Scott’s history – well, maybe the G2 has outsold it, but not by much. This is a fantastic fly rod for the truly dedicated spey angler.

Orvis took what they learned from building the H3 series, and applied that to two-handed rods. This is the result- the Mission fly rod family. Purpose-built for spey fishing, Mission rods deliver the same stellar accuracy you’ve come to expect from Orvis.

They also sell for slightly less than a new H3, which is a nice thing to see when shopping. Backed by the Orvis guarantee, this rod will serve you well for years to come.

If you’re looking to get into steelhead fishing at a more affordable price point, the Clearwater two-handed rods are your best bet. At just under $400, you can get a quality piece of spey fishing gear, without paying a premium price.

The Clearwater series is fast, but with a tip that’ll handle the meanest of runs from the most aggressive of fish.

Finding your perfect steelhead fly rod isn’t as arduous a task as you may imagine it. You’ll likely spend more time fretting over line and fly choices than you will rods. Take this advice into a fly shop, ask to cast some spey rods, and start to get a feel for what you want, versus what you need.

Then make sure you go fishing.