World record brook trout: Where and How To Catch Them 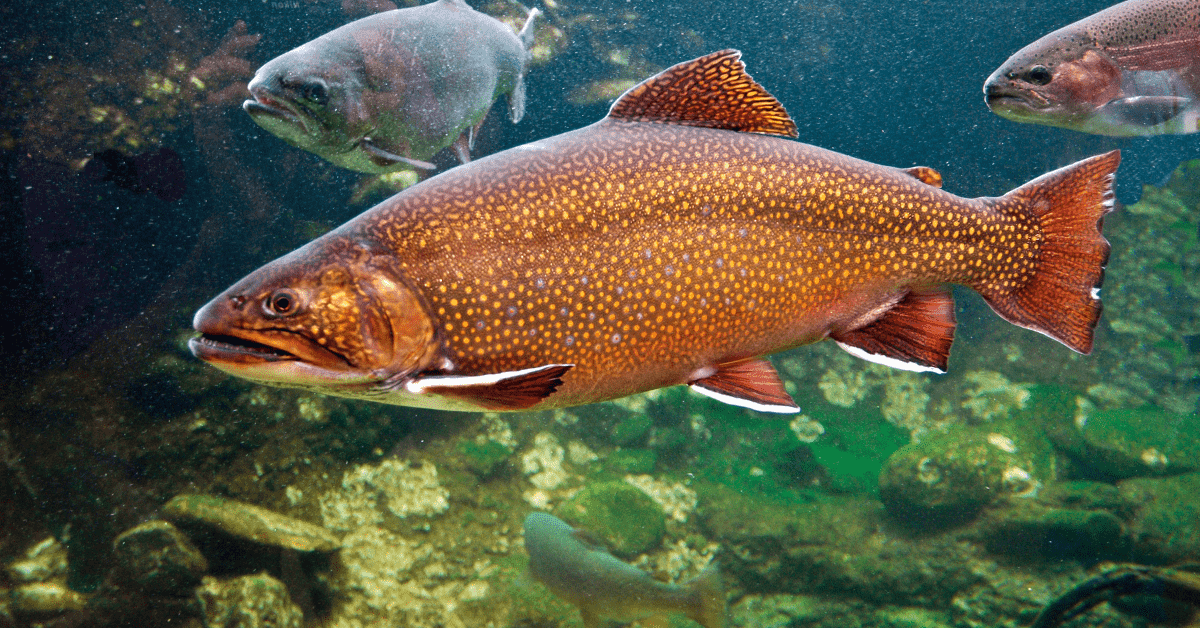 Brook trout (salvelinus namaycush) are native to North America and are a popular target species for anglers.

While they are called a trout, in reality brook trout are a type of char, a relative of lake trout, bull trout and dolly varden.

A typical brook trout in most places would be around 12″, but they can grow to twice this size in the right environment.

What is the Biggest Brook Trout Ever Caught (IGFA record)?

The current all-tackle world record brook trout, according to the International Game Fish Association, was taken way back in 1915 in Ontario, Canada.

The angler, Dr JW Cook, took the record brook trout in the Nipigon River on a seven-day fishing trip with guide Andrew Lexie.

According to reports from that time, the fish weighed about 20 pounds, but is only recognized as a 14.5lb fish as in these pre-refrigeration era the angling party were unable to preserve it properly on the journey to Toronto where it was inspected at the Royal Ontario Museum of Zoology.

The capture of this phenomenal fish is certainly celebrated in the Nipigon area in eastern Canada. The bamboo five weight used to catch the record brook trout is now owned by Thunder Bay dentist and collector Jim Donaldson.

Where Can I Find World Record Brook Trout?

Brook trout are found in the northern states of the United States and throughout Canada.

Outside of North America, brook trout have been established in Australia, New Zealand, Japan, Europe and Patagonia, where there is great fly fishing for trophy brookies.

The following rivers are some of these best-known in the US for catching big brook trout.

Located in Northwestern Ontario, this famous tailrace fishery is 30 miles long. Angling pressure is high, but a plentiful food supply and spawning areas ensure that there is a healthy population of large fish.

The Kinni, as it is known to most anglers, starts out as a spring feed stream and has sufficient insect life and other food sources to support self sustaining brown trout and brook trout populations.

The upper spring-creek style section, which flows through farm land, is home to a decent brook trout population with some trophy brook trout among them

The Au Sable river, one of the most famous fly fishing rivers in the US, has the stable cold water conditions that brook trout really favour.

This once-famous brook trout fishery was damaged by overfishing, but efforts in recent years to conserve stocks of brookies have born fruit and it is once again one of the best destinations to target record brook trout in the US.

Brook trout also thrive on the east coast of the US in rivers that offer the right conditions.

The fast cool waters of the Upper Connecticut River in New Hampshire are a designated “trophy” water for brook trout and are famous for having a decent population of large brook trout.

Fly anglers fishing the pocket water and glides and pools with nymphs are likely to encounter some great fishing, particularly early in the season. Later in the season, dry fly fishing is possible.

Located just two hours from New York City, the Beaverkill gets a lot of angling pressure. Indeed it is one of the most famous trout fishing rivers in the United States.

The upper section of the Beaverkill  flows through wooded country and that helps keeps create the cool water conditions in which brook trout thrive.

The brook trout in this section are relatively plentiful. While they are not large by overall standards, and you aren’t likely to catch a world record brook trout here, it does offer great angling for the fly fisher so close to one of the world’s biggest cities.

Big Brook Trout in the News

US regional newspaper the Berkshire Eagle recently published an interesting piece about angler who may have caught what was close to a world record brook trout.

Outdoor columnist Gene Chague wrote about how a friend had sent him a picture of an estimate 14lb brook trout caught in a river near Igloo Lake in Labrador, an area that’s home to some of the best brook trout fisheries in Canada.

The fish, which was released, was not officially weighed because there was no certified scale available at the time and the policy of the fishing lodge is to release fish promptly. They did measure the fish and it was a little over 25 inches long with a 22-inch girth. This enabled them to derive the estimated weight of 14lb, tantalisingly close to the 1915 world record brook trout caught by Dr JW Cook, which measured 31.5 inches.

Another recent news report on a potential world record brook trout was the 31 inch fish caught in Manitoba’s Barbe Lake while trolling for lake trout.

The fish was caught by local Tim Matheson and was recognised as a Manitoba record brook trout on the length – which measured 29 inches with a girth of 21 inches. After measuring and photographing the fish, Matheson and his fishing buddy released it.

“Based on the measurements of the fish and the pictures I’ve seen, I’d estimate Matheson’s brook trout to be between 15 and 17 pounds,” he said.

All About Brook Trout

Where to Find Big Brook Trout in a Lake or River

Brook trout thrive in clean, cold water and, for this reason, are often found in the upper reaches of river systems. The same applies to lakes – if you have high water quality and cold conditions, brook trout can thrive.

My best days of brook trout fishing have been in Argentina, where it is definitely possible to encounter world-record size fish.

I’ve fished for them in spring creeks and lakes around the Bariloche area using my float tube on the lakes to get out in the middle. I used my favourite pair of polarized sunglasses to spot the fish against the gravel bed on the bottom of the lake.

I caught at least 20 fish a day casting brown streamers resembling the local crayfish species, known as the pancora.

My friend and fishing author Greg French has fished more extensively for brook trout in Patagonia and talks about ishing for migratory brookies in the mouth of the Rio Corcavado and in the streams of Los Alerces National Park, where I targeted them in spring creeks.

But the most extraordinary brook trout fishing that Greg encountered was way down south in Tierra Del Fuego in the Rio Coyle, where he caught many decent brook trout on this remote stream on hopper style dry flies in late summer.

You can read about it in his book, The Last Wild Trout, which looks at the full range of trout species.

While they are famous for being a fly rod target, brook trout can also be caught on lures. In line spinners such as the Mepps Aglia series and small minnows and crankbaits will all take fish in the right conditions.

For fly fishers, nymphs and streamers are usually the best ways to target this member of the char family.

They tend to feed quite aggressively and are not the most difficult trout to catch. You don’t need heavy duty tackle to target brookies and 4 or 5 weight fly rod is usually sufficient for good fly fishing for this species.

Brookies can also be caught in lakes and often some of the largest brook trout are found in these spots, including in river mouths.

Stripping woolly bugger style streamers on a sinking or sink tip line is a great way to target brookies, who will often be found over gravel beds.