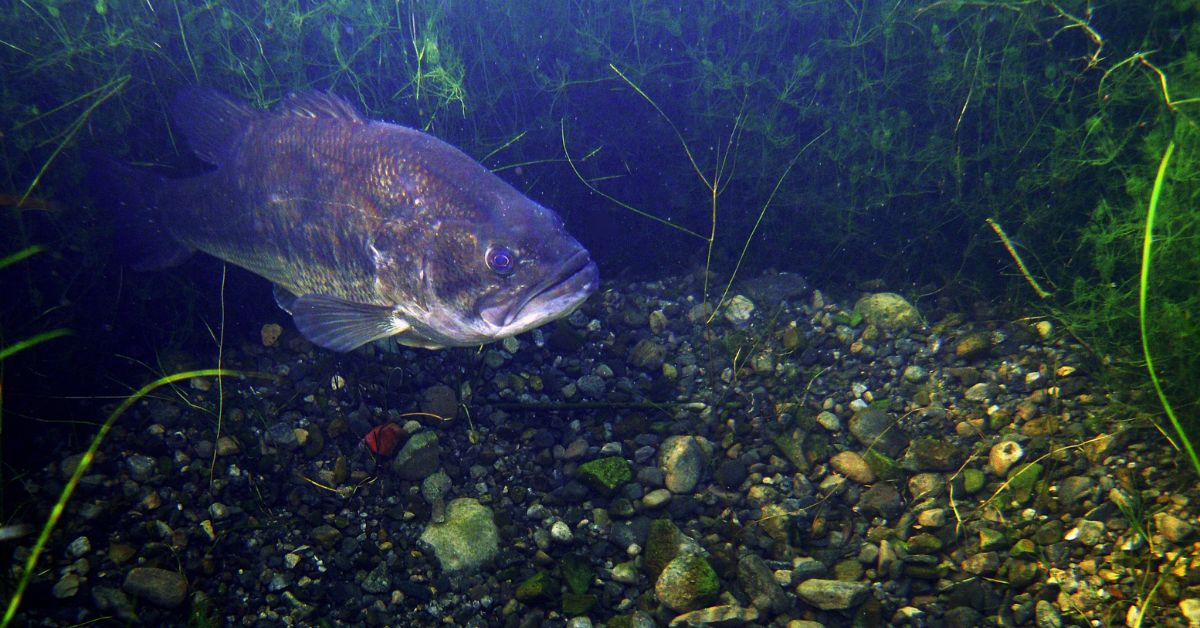 Whether you have years of experience, or are pretty new to the hobby, bigmouth or largemouth bass fishing can be a wonderful way to spend a weekend out on the water – particularly when bass are spawning in spring and summer.

These fish are large, easy to catch, and put up a nice fight on the end of the line. They also frequent shallow water during the spawning season which makes them easier for shore anglers to land.

Many anglers, myself included, will head out onto the water to do some bass fishing during the spawning season which can be anywhere from April to June depending on your area. This is a great time to get some really big female bass hauled in from their shallow spawning grounds, but can also get you some decent sized trophy males as well.

What Season Do Largemouth Bass Spawn?

These bass are a popular game fish in a range of areas in North America. They will spawn once per year in the spring and early summer. Depending on the location in the United States or Canada, spawning bass can be witnessed in April, May, or June which also happen to be great months for some bass fishing.

Keep in mind though that these months are estimates. It can change from year to year depending on how harsh or mild the winter was, as well as whether the fish are living in shallow water or deeper water. Instead of depending on the month itself, you can take a look at the water temperatures for a more definite idea of when you can do some spring bass fishing.

When Do Bass Spawn in Different locations

Southern populations of largemouth bass, such as those in Florida or Texas will start their pre-spawn behavior as early as late February and early March. Since these states rarely suffer from freezing winter temperatures and the water hardly ever freezes, the temperatures will get warmer much faster once spring hits. Female bass in this area are known as early spawners and can lay eggs much sooner than their northern relatives.

Resident fish in midwestern states including Tennessee, Missouri, Iowa, and Alabama will start performing pre spawn actions in April and May. This is the middle of the road type of spring temperature, with this area usually having a winter but it is rather mild overall most years. Fish living in shallow water will likely spawn in May, while those in deeper areas with more steady water temps will start in April.

Northern areas such as Minnesota and most big bass populations in Canada won’t normally start spawning behavior until May or June. Winters in these areas are extremely cold and it takes a while for the lakes and tributaries where bass live to thaw out from the ice.

Additionally, some lakes may not be completely free of ice until well into late June which slows down the spawn time and may even make bass more difficult to catch when spring fishing.

If you notice the lake is still mostly frozen when you head out to do some fishing, don’t be afraid to drop a thermometer into the water near the shore to check. Just because ice is out in the middle of the lake doesn’t mean the shallow water near shore isn’t the right temperature for spawn.

Where Do Bass Spawn?

Largemouth bass are somewhat a mix of both predator and prey. Larger and older bass will be able to eat a variety of other fish species as well as smaller bass on occasion making them an effective predator. But small juvenile bass can be prey for larger fish such as pike, and even other bass fish if they can catch them.

When spawning, bass will mostly seek out shallower water areas that are less than 4 feet deep to lay their eggs, usually near the shore that also have high amounts of cover. This cover can be from reeds, bushes, overhanging tree branches, sunken logs, or lily pads.

This not only keeps the spawning adults hidden from other larger predators such as pike, but it will provide thorough protection for their eggs and fry once they hatch. The tiny fry rely heavily on being able to stay well hidden in order to grow large enough to protect themselves, but even so, most bass fish won’t make it to sexual maturity due to the sheer amount of dangers in the lake, pond, or river.

The preferred ground cover for largemouth bass nesting and spawn areas is mud, pea gravel or small pebbles, or sand in shallow flats. If you can find this type of ground along with a decent amount of cover, you are sure to find largemouth bass spawning in this area during the right season.

This would also be a great place to test by dropping your bait or lure into the water. Wait a few minutes and see if you get a strike. If not, move to a different area or try again on a different day.

What Depth of Water Do Bass Spawn in?

In general, largemouth bass will look for shallow spawning areas of the lake near the shore in order to start their nest. In all of my years of fishing, I have never seen bass spawning in more than 6 feet of water but there have been reports of nests being found at 10, 15, and even 20 feet deep.

This makes sense though since the depths of the nests will depend on the water temperature itself. If the water is crystal clear it’s much easier for sunlight to penetrate deeper and warm the deep water nests with eggs or fry.

To start with, however, you should start your search for spawning bass fish in shallow areas of the main lake. If you can’t locate any bass or signs of spawning flats, you can then move deeper using underwater cameras or fish finders to locate and catch fish during the spawning season.

The answer to this question will depend on your location and where you are fishing for largemouth bass. In some areas of a few southern states there are no limitations on what month you can fish for bass. While there is a daily limit of how many bass you can catch, you can fish throughout the year including during the active spawning months.

Some other states allow fishing during the spawning season, but do not allow you to keep the fish. Catch and release only is a way to allow you to enjoy catching larger than average breeding fish, but by releasing them in good condition you don’t remove those animals from the genetics pool and instead help guarantee future generations of big trophy bass will be available for other anglers to enjoy.

Is Spawning Season a Good Time to Fish for Bass

If there’s one thing I have noticed, it’s that largemouth bass turn absolutely aggressive during the spawning season. These fish will strike at almost anything that moves, both in the water and out of it. I’ve seen spawning bass launch themselves above the stained water to grab a dragonfly that was zipping past during the late spring.

This is great news for anglers though, since spawning season can be an amazing time to catch some seriously big and very aggressive largemouth bass. They will not only take a wide range of lures, live baits, cut baits, and soft plastics, but will also give you one of the most exciting fights of your life!

They are also so eager to strike at pretty much any bait or lure that brand new anglers can have success landing their very first bass this way. No matter what you choose to use, drop it down into the nesting grounds and wait a few seconds for a reaction strike.

What Techniques Can You Use to Catch Spawning Bass?

You won’t need to have any specific technique, baits, or lures when it comes to catching spawning bass. They are very aggressive and so eager to bite at your lure and various baits that they will take almost anything that gets within their strike zone.

Some of my preferred options when specifically targeting actively spawning largemouth bass is a basic swimbait. This can be in a variety of colors, but I have seen the best results with bluegill color variations, blacks and purples, or deep blues. It creates an accurate and appealing silhouette in the water for the fish to strike, and I would strongly suggest you give it a try yourself to see if you have the same luck.

Other great lures you can look into will include a scented craw trailer on a flip jig lure. This not only has the motion bass love to see, but the lure trailer brings an enticing scent that can even bring some fish out of the nest to bite.

You can never go wrong with a Carolina rig or a Texas rig. These two rigs are great for nesting bass and if you rig up a natural colored craw you are sure to get some rapid strikes as soon as it sinks low enough into the nesting area.

One of the benefits of a Carolina and Texas rig is that you can use a variety of different baits and lures on the end with great success. Plus both of these rigs will get your lure and bait down into the nesting shallows where fish can easily see them.

For soft plastics, I love using and recommending finesse worms. These artificial bait options are great for the rare occasion when spawning bass seem a bit more slow or reluctant to strike, which is possible with very early spring fishing. This is also a good option for beginners to work with since it doesn’t necessarily need rigged and can be worked on shorter rods and light reel combos.