Does Catch and Release Hurt Fish? 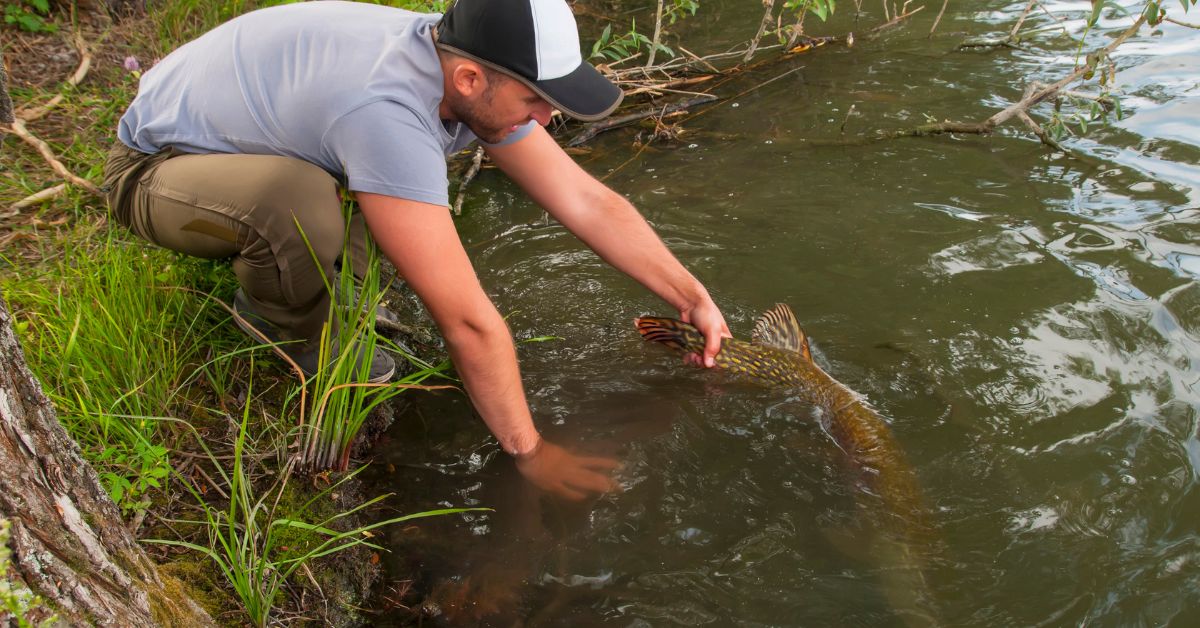 Does Catch and Release Hurt Fish?

Anyone that has spent any time practicing catch and release will no doubt have been asked by an onlooker or inexperienced fisherman if the process of removing the hook from the hooked fish and returning the fish to the water hurts it.

While this debate of pain in the released fish has been ongoing for many years, even a variety of different scientific studies have not been able to fully agree on an answer.

However, both Switzerland and Germany have added catch and release fishing to a list of banned activities due to the stress and potential harm it causes the fish during catch and releases angling.

In the USA and many other areas, catch and release is a very common activity, and is even mandatory for trout fishermen in many trout fisheries to release fish.

There will be anglers on both sides of the debate that strongly voice their opinion, some with potential facts to back up the claims, and some saying it depends on the fish species.

As an angler, whether casual or professional, the decision on whether or not to practice catch and release will normally be up to you. Unless it’s a protected species where releasing a caught fish is mandatory, your personal beliefs and opinions will be the best deciding factor.

For many years, it was believed that fish do not feel pain but instead will only react to external stimuli, and so the process of being hooked, having the hook removed, and being thrown back into the water was a painless experience for them.

As this belief became more widespread and accepted with anglers that catch fish just for fun, catch and release became the humane way to enjoy fishing while still putting the fish back into its natural habitat to continue its life and grow the fish populations.

However, as more studies have been done, doubt has started to form in some communities of sports fishers. It’s not argued in scientific circles that fish have a certain number of pain receptors in their bodies, but the issue where trouble starts is in determining just how these receptors process the sensation of pain.

For humans and most other animals, reacting to the pain from a needle poke is expected because it causes pain. But when this same action is done to fish and they react in similar ways, it makes people start to wonder whether pain was involved or not.

Even if fish do feel pain, it may not be in the same way humans and other higher life forms do. This is due in part to the difference in the amount of pain receptors and other neurological structures in the body.

While a sensation may not be painful in the way humans understand it, there is no doubt that fish do feel some sort of sensation.

The question then lies on the morality of catch and release. Does it cause a slow death for a vast majority of fish, or is it actually a humane choice for many anglers to practice?

Catch and Release or Catch and Kill: Which is More Humane

Catching and eating fish is not a horrible crime, and should not be treated as such. Over time, some groups of individuals that stand for the welfare and ethical treatment of animals have tried to get fishing as a sport banned due to the inhumane practices it allegedly inflicts on fish.

Nothing is more rewarding than heading out to your favorite fishing spot and reeling in a few large fish that will feed yourself and your family for dinner.

As long as these bigger fish are legally harvested in accordance with the fisheries management regulations, fishing for your own meal is an entirely sustainable practice.

Some countries agree with this entirely, in fact. Both Switzerland and Germany have banned the practice of catch and release entirely as it falls under animal cruelty laws.

They would rather you catch and kill a fish for your own consumption than catch and release it simply for sport which is where many anglers become confused by the ethics involved.

Ethical concerns with catch and release can be found all over if you look for them. As anglers, you have probably accidentally run a hook through your finger at one time or another and know it is not the most pleasant sensation. Now, imagining that same sensation on your lips might make you rethink the ethics of catch and release entirely.

However, in many locations around the United States, Canada, and other countries, catch and release is a requirement put in place by the DNR and National Park Service.

Many fish have been pulled in by anglers with signs of being caught multiple times before which tells us that fish can and do recover from this experience.

The same cannot be said of fish that are caught and not released.

What About the Mortality Rate?

Being caught on a hook and dragged into a boat is an extremely stressful experience for fish, at least that’s what we as humans can imagine. Surely such a horrible experience has to carry a high mortality rate, right?

Not necessarily. While it is hard to get the exact numbers on mortality rates of exhausted fish that have been caught and released, educated guesses can be made by various fisheries in the United States with regards to their average catch numbers throughout the years.

For example, when asked about hooking mortality, the Idaho Department of Natural Resources stated that caged Rainbow Trout caught on flies had less than 6% mortality. This is great news for any fly fisherman to hear.

Caged Rainbow Trout caught on other lures and larger live bait had up to 25% mortality rate.

For uncaged and captive bred Rainbow Trout in Yellowstone National Park, the mortality rate was much lower at barely 0.3%. However for fully wild Rainbow Trout, the estimate was closer to 16%.

And when it came to both Chinook River trout and Steelheads, the estimate was less than 5%.

How To Make Catch and Release Hurt Fish Less

Nobody is here to tell you to stop practicing catch and release; only you can make that decision. However, as an angler it is your job to ensure the fish has the most humane treatment while it is out of the water.

Here are some ways you can ensure these amazing animals make it back into the water quickly and safely.

The longer a fish is out of water, the less chance it has of making a full recovery. As an angler, you most definitely want to get measurements of your catch, and possibly a photo too, but this needs to be done as quickly and efficiently as possible.

Also try to limit the amount of touching you actually do to the fish’s skin. Fish are covered in a natural slime coat which protects their scales from parasites, fungus, bacteria, and other harmful things in the water.

By touching the body with a gloved hand, laying the fish on your lap, or wrapping the fish in a towel you are removing a large amount of this slime coat and opening that fish up to a variety of infections which may in fact kill it.

Always try to minimize the amount of touching that has to be done to a fish, and never ever wrap it in a towel or other fabric in order to make holding it easier.

Having fish on a leader line at the side of the boat so they remain in the water is a great way to keep them wet and protected from excessive handling.

If you know it’s going to take some time to get measurements and photos, it’s best to do it one at a time while keeping the other fish in the water over the side of the boat.

In fact, if you can remove the hook while the fish is still in the water and forego getting the photo and measurements, this can give the fish the absolute best chance of making a full recovery from the stress of being caught.

Removing the hook is the main reason fish are kept out of the water for longer than they should be, especially if you use barbed hooks.

These pieces of tackle are specifically made to keep fish on the hooks, and removing it can be extremely damaging to the fish.

Be Careful How You Handle Your Fish

When holding your fish, it’s a common practice for anglers to hold it by the fish’s mouth. This can be fine for most fish as long as they are held vertically.

When you want to get a great photo of your catch, support the body weight with your other hand instead of bending the bottom jaw in an unnatural position.

Smaller fish may be fine to be “lipped” for a photo, but larger fish can have their jaws dislocated or broken, preventing them from eating and leading to their inevitable deaths.

Whether or not catch and release is more humane than catch and keep is still up for debate. We still don’t fully know if fish process pain in the same way we do, nor are we entirely sure how stressful catching them may be.

However, as an angler there is nothing wrong with respecting these wonderful animals and treating them well when they are out of the water.

Afterall, they just gave you a nice fight on the line and releasing them in good condition can allow them to give another angler a nice fight too.