When do Striped Bass Spawn? Season and Locations 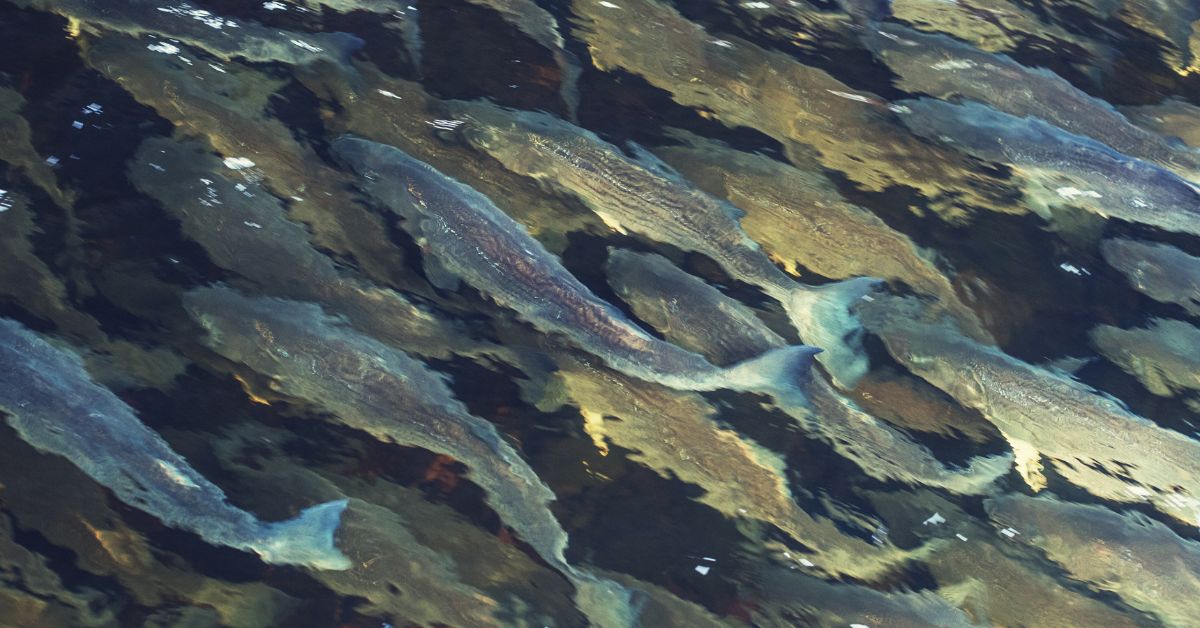 As one of the largest fish in the bass family, striped bass are one of the most desirable game fishes in North American coastal waters and rivers. You may have also heard striped bass called by other names including rock fish, line-siders, or stripers – but it’s all the same fish.

Striped bass will spawn throughout the spring months of March, April, and May. This early season spawning is after the water temperature increases along the Atlantic coast where they live most of the lives, but before temperatures rise too much.

Once migratory striped bass move to their breeding grounds and start spawning, their behavior will change drastically and they can be much more difficult to catch. After their spawning season has ended, though, striped bass will feed aggressively and are susceptible to a well presented lure or fly.

What Season Do Striped Bass Spawn In?

Most of the normal spawning behavior for striped bass will begin in March after water temperature has risen, and will run through May. As soon as water temperatures along the Atlantic coast and in the rivers they swim up reaches 60 to 70 degrees, stripers will start migrating inland and up the rivers to their spawning grounds.

In far northern regions, mature striped bass may not start their migratory patterns until mid April as it takes longer for the water temps to rise in that area. For southern populations of striped bass, spawning behavior will start in early March with migrations sometimes starting in mid to late April.

Each year, groups of striped bass will migrate out of saltwater areas and up into freshwater rivers and lakes with the intention of producing fertilized eggs for the next striper spawn generation. It is in these freshwater locations of areas such as the Chesapeake Bay and Lawrence River they will lay their eggs before making their way back towards the saltwater of the Atlantic ocean.

Large female striped bass can release millions of ripe eggs, and smaller females can release several hundred thousand ripe eggs. Stripers are scatter breeders which means the females will release all of their eggs into the water column to be carried by the current or settle into the substrate.

As the eggs are released into the water by the female, the nearby single male or group of male stripers will release their sperm into the same water. As the sperm and eggs combine, the eggs are fertilized externally and the fertilized eggs drift downstream slowly. Seeing this behavior from the surface looks like an epic battle happening below as the fish twist and thrash around making waves and splashes at the top.

After the eggs have been scattered, if conditions are right they will hatch within 72 hours. The young stripers are extremely tiny and will lay low in rock beds, vegetation, and other hiding spots for protection.

Where do Striped Bass Spawn?

Striped bass are primarily a saltwater fish, but their breeding behavior and spawning is only observed in freshwater. Unfortunately, not much is known about this behavior because these large fish are rather elusive.

We do have some good ideas of where they choose to spawn, however. The most common area is in shallow points of river channels. The fish can swim several miles up river away from a dam and into deeper headwaters. In this area, you can find hundreds of stripers all congregating for that year’s breeding.

Other areas include flatland reservoirs and the shallow humps throughout. These humps of land can be 15 feet with extremely deep water all around. This deeper water is desirable for stripers and other larger game fish to stage in.

How Do Striped Bass Spawn?

Striped bass can live for up to 30 years, and female striped bass become sexually mature at around four to five years of age. At their first spawning, they can produce a half million striped bass eggs, though not all will be fertilized or develop into fry. As females get larger and older, they will be able to produce many more eggs, sometimes up to 5 million ripe eggs.

Most male stripers become sexually mature much younger, usually around two years of age. They can start producing viable sperm at this time, and will usually start following migration routes in their second season of life.

Female striped bass move towards freshwater sooner and will normally reach the spawning grounds before males. They will then attempt to locate proper areas to scatter their eggs. After most male stripers arrive to the area, breeding behavior kicks into full gear with the mature striped bass males bumping the females in order to stimulate her to release the eggs.

While the eggs are being released, the males release sperm or milt into the water around the eggs to fertilize the cast eggs. The eggs will drift through the water column or sink into the vegetation and rocks at the bottom for up to 72 hours at which time they will hatch into tiny fry. As they are developing, eggs swell to several times their original size before hatching.

Striped bass eggs hatch into fry, or larval fish. Typically striped bass larvae will start feeding on microscopic plankton and other debris in the fresh water column while they grow and attempt to avoid predators. These fry will remain in the nursery area until their juvenile stage before they start heading towards the Atlantic coast areas and saltwater.

Striped bass are not paternal at all. They will not remain to guard the nests or protect the eggs from predators.

Since the hatch rate is higher if the eggs remain suspended in the water column, they are slightly elongated in order to catch the current better. Fertilized eggs must remain suspended for the best hatch rate. Eggs that fall straight to the bottom can still hatch, but will have a higher egg mortality.

Depending on the size of the female and how many eggs she can lay, the egg shape may be perfectly round to oval with a bit of a globule tail. While no official studies have been done on how striped bass eggs hatch and their success rates, it is believed that oval eggs suspend better in the water and therefore have a higher hatch rate overall.

Temperatures play a very big role in what triggers the striped bass to start their spawning runs. Once the temperatures reach 60 to 70 degrees, striped bass behavior will change and they will start to move towards coastal areas and freshwater rivers, bays, and tributaries.

Once they migrate to their spawning grounds, actual spawning behavior and egg release by the female striped bass can be triggered by the behavior of the males nearby. As these males start bumping into the female’s body, she is stimulated to release her eggs into the water.

Can You Catch Spawning Striped Bass?

While you can technically catch stripers during their spawning season, they will generally be more focused on breeding than they will be on taking your bait. Your chances of landing large trophy females will be better after the spawning season when the fish are moving back towards their saltwater areas.

After the migratory effort and energy that is expended during spawning, both male and female stripers are ravenously hungry after the deed. This is the best time to toss your lure into the water and encourage a few strikes.

See our article on how to catch striped bass for some vital tips.

Are Striped Bass Stocks on the Decline?

While they can lay up to 5 million eggs in a single season, striped bass populations are sadly on a steady decline. They are being heavily overfished in various areas of the Atlantic coast and fishing regulations are still outdated and haven’t been changed recently which all plays into reducing the striper population.

Fortunately, many anglers are taking notice of the issues regarding population decline and are doing their part to encourage regulation change and catch and release fishing. Stricter fishing restrictions and smaller seasons, as well as restricting fishing when fish migrate south for breeding may help increase striped bass numbers around the country.

Until more anglers and those in charge of changing regulations take notice of the population decline and areas where striped bass are hit hardest, nothing will change. It’s up to each of us that love spending time on the water to help encourage these positive changes for future generations to be able to enjoy catching these amazing fish.