When do Brook Trout Spawn: Season, Conditions and Locations 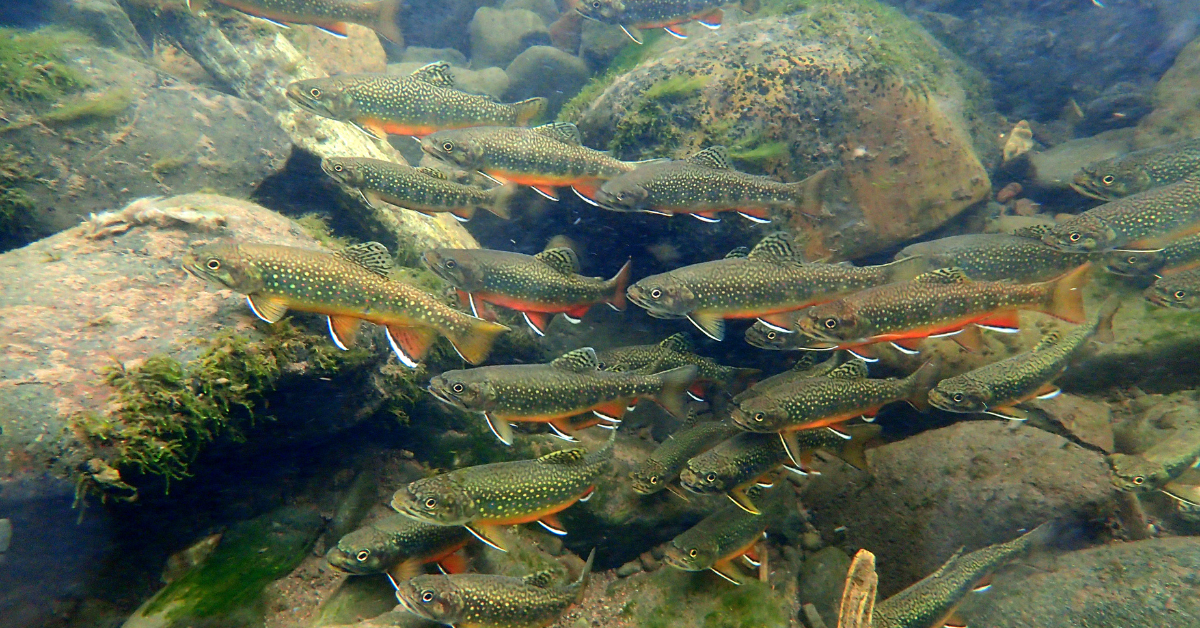 Brook trout spawn in the fall – usually between September and November, depending on the location.

Brook trout are one of the most beautiful freshwater fish in the world. While they’re technically a part of the char family, they have the same spawning tendencies and appearance of many other types of trout that are found across the world.

The brook trout population across the world isn’t huge, so their annual spawns are vital to keep their populations thriving. In this article we explain in detail the spawning characteristics of this species (salvelinus fontinalis).

On average, brook trout will be 8-10 inches long. Some of the larger rivers and streams will hold fish that are around 16 inches long.

What is the Spawning Season for Brook Trout?

Brook trout spawning season is the fall. Somewhere between September and November each year, brook trout populations will begin and complete the spawning process. This time of year is perfect because the air temperatures and water temperatures have dropped and provide brook trout the ideal conditions for spawning. Plus, the water levels are low enough that they won’t be stuck fighting the current the entire time.

Brown trout and rainbow trout spawn somewhere between the fall and winter, so brook trout are not alone when they spawn. It can be a busy time of year for rivers across the Untied States.

Where Do Brook Trout Spawn?

Wild brook trout populations and stocked brook trout spawn in essentially the same exact way. They aren’t overly different than all of the other trout species in what they need to spawn. They prefer gravel and sediment bottoms that have some sort of ground water or spring fed water in the area.

Also, they look to find slack water where there is an opportunity to rest and protect their eggs as best as they can. Once they locate the ideal place, they begin to start creating their redds.

What is a Redd, and What’s it Look Like?

A Redd is another name for a spawning bed for trout and salmon. They get their name from the red color of the eggs that protrudes through the water when looking at it. Protecting Redds is vital to the survival of the population.

A Redd is created by the female brook trout. When they find the ideal spot in the lake or river, they want to dig a small “hole” in the gravel to lay their eggs, so if a current is flowing, their eggs won’t get swept up and pulled downstream.

Females will dig several Redds when it comes time to spawn. One single Redd isn’t enough room for them to deposit all of their eggs.

Once it’s at the proper depth, they’ll lay their eggs and continue along with the spawning process.

Brook trout need a variety of things to fall in line for them to begin the spawning process. They’re a particular fish with unique tendencies, so they try to have a few different things in line before they begin to spawn.

If the water is too warm, brook trout will burn a ton of unnecessary fat and potentially die from the spawning process. Since brook trout require extremely cold water to live in throughout their lives, 42-45 degree water isn’t always a significant drop. Brook trout like to live in water that’s somewhere between 50 and 55 degrees throughout the year, so those fall air temperatures will drop quickly once the weather starts to turn.

Brook trout sense when this temperature change is coming, so they do their best to prepare themselves before the action begins.

Flow rates also play an important role in the brook trout spawn. Since it occurs in the late fall or early winter, flow rates are generally fairly low. Brook trout will spawn both in streams and rivers, so there isn’t a one size fits all answer, but as long as it’s a traditional late-fall or early-winter flow, the conditions are good enough for the brook trout to spawn.

Trout will seek out water that’s a bit more shallow and slack to ensure they’re able to withstand the current when it comes time to lay and protect their eggs. They’ll swim into a seam or more shallow portion of water that has a gravel bottom. Plus, when the eggs hatch, young brook trout need a softer and slower flow to get their lives started.

The eggs still need a current, so they have plenty of oxygen but it doesn’t have to be extremely strong.

The colder and more oxygenated, the better. The oxygen levels allow for the eggs to grow and the adult brook trout to fully recover.

How Do Brook Trout Spawn?

The spawn starts by females looking for a place to lay eggs. They’re searching for the ideal gravel bottom with enough current to help the eggs grow and enough room to dig several Redds. Once the females find the right area, they will start to dig the Redd by nosing around in the gravel.

Once she knows it’s ideal, she’ll start digging by writhing on her side and using her tale to thrash around enough to get the gravel to move around. Redds can be anywhere from a 3 or 4 inches to 15 inches deep. This process is extremely exhausting for her.

Females will then begin to lay her eggs in the Redds that she has dug. The Redd provides that protection from the current, so her eggs don’t all wash away down stream.

These eggs aren’t able to grow until a male brook trout comes and fertilizes them with his sperm. Once they’re fertilized, the males and femlaes will guard the eggs together.

Males are able to fertilize multiple female brook trout Redds, but that’s not always possible since male brook trout compete over the females. After the eggs are fully fertilized, the female trout will cover them with some gravel and let them grow. It can take anywhere from three to five months for the brook trout eggs to hatch.

How many Eggs do Female Brook Trout Lay?

Depending on the age of the female brook trout, she’ll lay anywhere from 100 to 5,000 eggs during the spawning process. The first one or two spawns are usually fairly low in overall numbers for females, but once they’re fully grown, they begin to lay substantial amounts of eggs.

Can You Legally Target Brookies During the Spawning Season?

Yes, you can legally target brook trout during the spawning season. Since species like steelhead and salmon are more legally protected than trout, it becomes more of an ethical question for trout anglers. Spawning trout aren’t like bass in the sense where they are able to withstand a fight and go right back to their bed.

While they don’t always die when they’re caught, they can suffer from some serious exhausting and slow the recovery process down.

Spawning brook trout do undergo some physical changes during the spawn. Females won’t undergo as much change as the males, but you’ll start to notice a yellow on their usually white bellies. Also, their tails may have a hint of red at the bottom. This is blood from the process of digging their Redds.

Male brook trout, however, will undergo a fairly substantial color change. Their bellies will turn to an orange or bright red as the spawn is occuring. Also, like many other male trout and salmon species, they’ll develop a kype jaw. You’ll notice their lower jaw becomes a hook shape.

Once the spawn is over, the normal physical appearance of brook trout return.

Brook trout do not migrate great distances to spawn. Odds are, the river, lake or stream where they’re living has the proper habitat for them to complete the entire spawning process. They may find a more shallow part of the river or migrate to a section with a gravel bottom, but they’re not travels 10-20 miles to complete the spawn.

Will spawning affect a brook trout’s appetite and can they be caught?

Spawning will affect a brook trout’s appetite. When they’re in the midst of the spawn, their main focus is laying eggs and fertilizing them. Males will also be busy fighting off other males to ensure they’re the only fish able to fertilize the eggs.

Like many other fish during the spawn, brook trout will generally strike out of aggression. If food gets too close to their eggs or they feel threatened, they’ll strike and do their best to kill anything that’s impeding on their space.

They definitely can be caught.

Should You Target Spawning Brook Trout?

Most anglers would say that there’s no need to target brook trout during the spawn. Plus, they’re likely near Redds and we need to do our best as anglers to protect them and allow for them to spawn, so we can continue to enjoy their beauty.

There are likely going to be a variety of other fish in the same body of water as the spawning brook trout, so it’s best to target other species and let the brook trout finish the spawn and regain their energy.

Do your best to avoid them and their Redds. It’s going to ensure that we have healthy brook trout populations for years to come. The better the spawning goes for brook trout, the more likely wild populations will be able to sustain themselves and the need for stocking diminishes.

Will Brook Trout Die After Spawning?

No, brook trout will not die after they complete the spawn. Trout are able to spawn several years in a row before they either die or become too old to complete the process. It’s exhausing and takes some time for them to recover, but they’re able to survive.

Brook trout spawn at fairly similar times in the United States, but there are a few weeks difference depending on where you’re fishing.

In Montana, brook trout eggs will be laid in September or October and more than likely hatch some time around February. Rainbow trout are active during this time, so go ahead and target them.

In Colorado, the spawning season for brook trout begins in September and will go through December or early January depending on water temperatures and levels. Brown trout actually spawn at the same time as the brook trout in Colorado. (See here for details on getting a Colorado fishing license.)

Like Colorado and Montana, Wyoming brook trout will begin laying eggs in September or October and the brook trout fry won’t officially hatch until the early spring.

It takes a bit longer for water to get cold in Michigan, so brook trout won’t start spawning until mid-October or early November. Halloween is the time when the brook trout spawn is in full swing.

The mountain lakes and rivers in Utah will see spawning trout around October or November. The eggs will hatch in February! 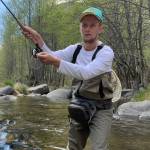