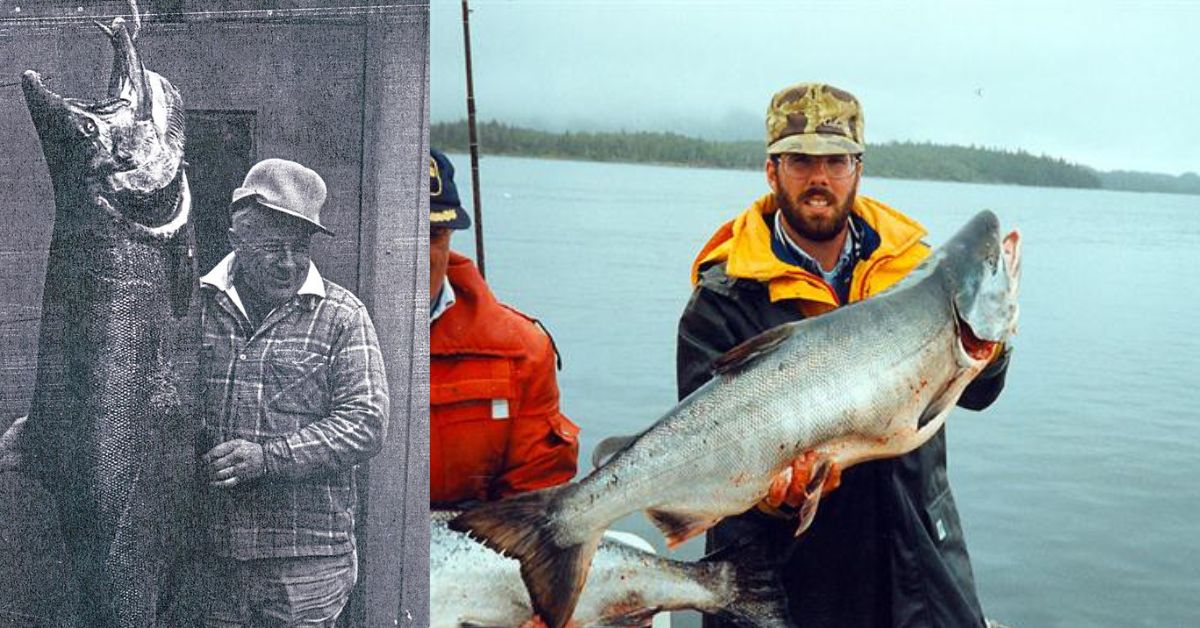 Salmon species are a popular fish to target for anglers heading out on fishing trips around the world. Each species of salmon varies in size, but there are some pretty big salmon out there (as well as some pretty small ones too).

In this article, we are concentrating on the biggest pacific salmon ever caught, along with the Atlantic salmon record. We explore some world-record salmon that have been caught, measured, and confirmed as world records by the IGFA (International Game Fish Association).

The IGFA is responsible for checking, confirming, and awarding game fishing world records. They have some very strict criteria to meet before they will add your catch to the record books. Not only have all of the salmon in this article met the criteria, but they have also done enough to give the anglers who caught them the title of world record holder.

Some records have stood for a long time and seem almost unbeatable, while others have been set more recently indicating that there are still some truly monstrous salmon out there.

All the way back on the 1st January 1928, Henrik Henriksen set out on a New Year’s Day fishing trip in the Tana River in Norway. Henrik was a fishing guide so clearly knew the waters well, and he knew how to give himself the best chance of landing a big fish to start his year off successfully.

Henrik ended up catching an Atlantic salmon that weighed in at a very impressive 79 pounds and 2 ounces.

When you think about how long this record has stood for, it seems that it could actually be unbeatable and Henrik may have actually caught the biggest Atlantic salmon that has ever lived and that will ever live.

If you think that there aren’t any truly big salmon left out there, seeing as this record was set back in 1928, then it’s worth keeping in mind that the All Tackle length world record for Atlantic salmon was set in 2021.

Young angler, Konstantin Sherbovich was fishing in the Khokanta river in the Murmansk region of Russia on the 11th of June 2021 when he caught his record-breaking salmon. At the time of his catch, he was fly fishing using a Ponoi rod and reel, and a Seaguar line.

It took Konstantin 20 minutes of fighting to get the fish out of the water but, when he did, it measured in at 39.37 inches in length (1 meter).

This record-breaking catch shows that big fish are still out there and you might just be lucky enough to land one on your next fishing trip.

When Les Anderson and his fishing buddy, Bud Lofstedt set out on their fishing trip on the Kenai River back in May 1985, they weren’t expecting to catch a big fish. They knew it was early in the season for king salmon so, while they were hoping to catch some memorable fish, the massive king salmon Les actually caught came as a complete surprise.

Les used a Fenwick rod, a Garcia 757 reel, a Maxima line, and a spin glow lure (although he switched between this and salmon eggs) to catch his historic fish.

The king salmon that took the bait was powerful and was able to pull the 68-year-old Anderson around on his boat. He actually got the fish beside his boat three times but it was too big for him to lift on board. Instead, he lead it back to land and Les was finally able to subdue the giant chinook.

Once the fish was weighed, the weight of 97 pounds 4 ounces was submitted to the IGFA who eventually confirmed that Les Anderson was the new world record holder.

Anderson’s record catch was known locally simply as the “big fish” and Anderson himself, up until his death in 2003, was known as “the man who caught the world-record salmon”. The fact that this record still stands, almost two decades after his death is a testament to the fact that Les Anderson caught the biggest King salmon ever seen.

Jerry Lifton was fishing on the aptly named Salmon River in New York when he caught his record-breaking fish. He was using a Shakespeare Ugly Stik rod, a Shimano GFX 2300 SQ reel, and was casting a Luhr Jensen egg.

As this is another long-standing salmon world record, it’s worth mentioning that the All Tackle length world record was set much more recently, in 2021.

Angler Dennis Triana was fishing in Resurrection River, Alaska, USA using an Oceanmaster rod, a Penn reel, an Ande line, and a clouser lure. The coho salmon he caught on 21st October 2021 measured in at 29.53 inches in length, which was enough to put Dennis (and his coho salmon) into the IGFA record books.

Todd Johansson was salmon fishing using a Daiwa KGX-99X rod, a Daiwa DC 375 340 20 lb reel, and a Berkley line baited with herring when he landed the biggest chum salmon ever caught.

35 pounds might not sound like much compared to some other truly monstrous, world record fish out there, but, seeing as this record has stood since 1995, it shows just how big this fish was compared to the rest of this salmon species.

One of the most famous salmon fishing spots in the world is the Kenai River in Alaska. Several record-breaking species of salmon have been caught here, including Stan Roach’s sockeye.

Not too much is known about the fishing gear Stan was using when he caught his giant sockeye but, what is well known, is just how big the fish actually was. With a weight of 15 pounds 3 ounces, a length of 28.25 inches, and a girth of 21 inches, this was the biggest salmon of the sockeye species ever caught and remains as such to this day.

Alexander Minerich was just nine years old when he landed the biggest pink salmon ever caught. At the time, he didn’t think it was anything special and he, alongside his father Steve, had caught and released more than 20 fish during their fishing trip in Monroe, Washington state.

To successfully catch the 14-pound pink salmon, Alexander was using a Lamiglass rod, an Ambassadeur 2500C reel, a Maxima line, and a Dick Nite spoon.

Wallowa Lake is a stocked salmon lake in northeast Oregon. Outside of this type of stocked lake, kokanee’s usual spawning grounds can be found in Japan, Russia, British Columbia, and the Yukon river.

When Ronald Campbell set out on his fishing trip in Wallowa Lake, he was using a Lamaglas Cascade Pro XT rod, an Ambassadeur 4500C reel, a P-Line, and a Shasta peewee hoochie. It was with this gear that he landed his 9-pound 10-ounce record breaker.

An interesting point to this world record is that it would have actually been broken in 2017 when an angler caught a kokanee that weighed over 12 pounds. The only problem with this is that the angler mistook the kokanee for a big trout so ate it!

It was only after a biologist looked at the head and bones of the fish later on that the “trout” was confirmed to actually be a potential world record fish. Unfortunately, as it had now been eaten, the world record still belongs to Ronald A. Campbell.

Takeshi Matsuura used a Watanabe Fishing Tackle rod, a Shimano Twinpower 4000 reel, a TIFA line, and a Minnow Plug to land his record-breaking masu salmon in 1995. Masu salmon are mostly found in Asia so it shouldn’t come as too much of a surprise that the world record masu salmon was caught in Japan.