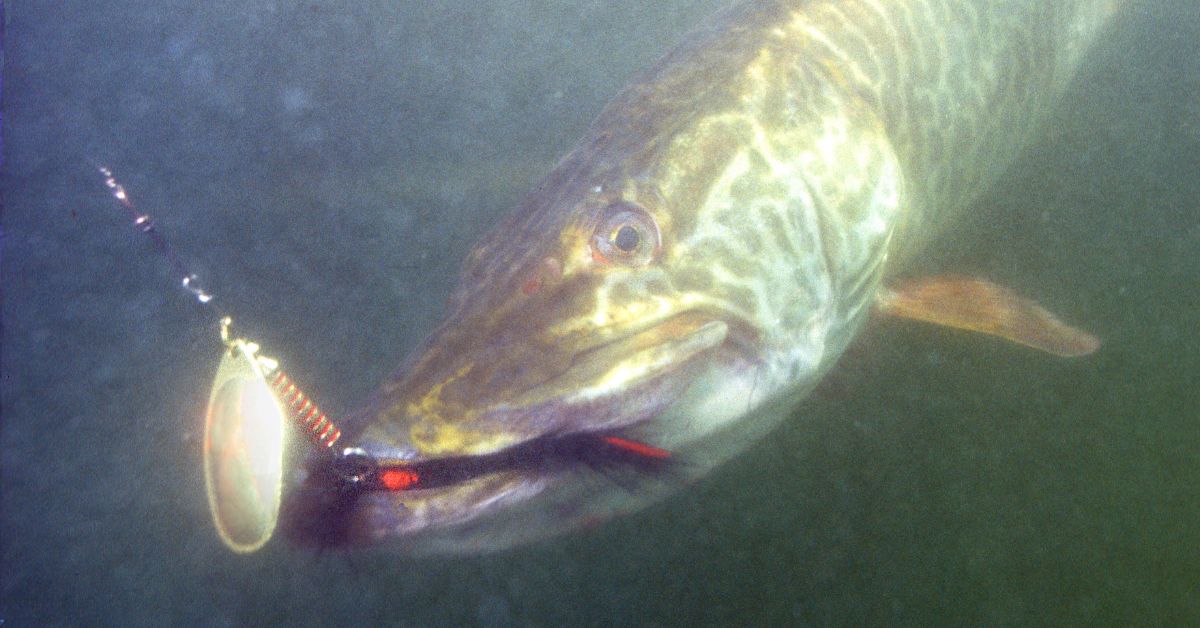 Muskie fishing requires the use of specific types of equipment and gear, as musky fishing techniques and lures can vary greatly in size and action compared to lures used for other species. Let’s take a look at our essential muskie fishing gear list to help you get prepared on the water.

Musky Fishing rods used by anglers today are typically anywhere from 8 to 9 feet in length with a medium heavy to XX heavy power depending on the techniques and lure the rod is being used for.

Musky rods almost always have a fast action, and are made of graphite and not other materials like fiberglass, though there are exceptions.

When using large soft plastics and #10 double cowgirl style bucktails, you will want to use a 8’6″ to 9′ length rod and at least a heavy power rod.

The smaller your lures become the lighter you can go on power, but rod length should stay to a minimum of 8 feet, unless you have a designated jerkbait rod, then 7’6″ is applicable.

Selecting the right reel is a complex topic, and like with rods, you choice will be highly dependent on what lures you plan to use with it.

Bringing in the giant double cowgirl style blades needs to be done with a reel that can handle the large amounts of drag and resistance caused by the lure. Large reels with gear ratios in the 5.8:1 or lower range will help, along with power handles.

For lures like jerkbaits, rubber pull baits, and glide baits a higher gear ratio that can quickly pick up slack between pulls and twitches is the best route.

When it comes to reel size, the same rules applies as with rods, and the lighter the lighters the smaller your reel can be.

There’s almost never a time when you shouldn’t used a braided line for musky fishing, and you should use anything from 65 to 100 pound test line, with most anglers using 80-100 pound line.

The one exception that I see with anglers, and something that I choose to do myself is to use 25-30 pound monofilament line for my trolling rods, mono is far cheaper than braided line, and with a lighter drag setting can work well for trolling.

Even when trolling, braided line will still be your safest bet.

Topwater lures can absolutely dominate fish in the right conditions, and you should have a fairly decent selection of topwater lures.

Topwater lures are the lures I own the least of, but I have a couple of each main type of topwater lure, from prop style baits, walk-the-dog style lures, creepers, and lipped topwater lures like hawg wobblers.

Muskies can be very sensitive to a particular action or sound, and one day they might bite prop baits with reckless abandon, and at other times they prefer a slower presentation, or zig-zag style presentation.

Swimbaits have become all the rage in recent years, and now several musky lure companies have jumped on the band wagon and produce some great swimbaits.

Most swimbaits are soft plastics with paddle tails, and these give a very natural feel in the water when musky senses it with their lateral line, and the paddle tails create great vibration in murky water.

There are also several types of hard baits that fit into the swimbait category, and most of these are jointed designs that have a very subtle and realistic swimming action, there are also hybrid combinations of the two.

Spinners commonly known as bucktails are the most used musky fishing lures. Bucktails come in many different forms, featuring different skirting materials, types of blades, and numbers of blades.

Inline bucktails of all kinds make up the bulk of any musky anglers arsenal, but large spinnerbaits also work incredibly well in the right conditions, so don’t leave them out of your tackle box.

Soft baits have already been mentioned in the swimbait section, but there are many different types of soft plastics available to the musky angler.

Curly tail soft plastics like bull dawgs are one of the, if not the most commonly used soft plastic musky lures used today, along with swimbaits.

Another commonly found soft plastic musky lure is the tube. Musky tubes are much larger than those used by bass anglers, and aren’t jigged on the bottom much, but are instead worked around structure and weed edges similar to a pull bait.

There are also soft plastics that are designed to be vertically jigged directly below the boat. A great example of a vertical soft plastic design is the Bondy jig.

Crankbaits are commonly used in both casting and trolling situations for musky, and many musky anglers use them similar to jerkbaits as well, with erratic rips and pauses.

When trolling, crankbaits help anglers cover large areas of water in an attempt to find active fish, and on some bodies of water this is the dominant form of fishing.

Crankbaits work well for thoroughly picking apart cover, and fishing precise spots in an attempt to trigger a fish.

Crankbait designs vary from shallow running crankbaits, to deep crankbaits, and everything in-between, and they can be hard baits, or hybrids of both soft plastic and hard plastic.

Jerkbaits and Glide baits are staple musky fishing lures that are used quite often to catch muskies compared to other species.

Jerkbaits in musky fishing are typically dive and rise designs, like the legendary suick thriller, and glide baits typically have a zig-zag swimming action.

There are also jerkbaits like the reef hawg that are a sort of in-between take on the two designs, and they can be quite effective on the water.

There is a wide variety of lure designs out there, and it’s hard to cover them all in one post, but some other designs include large vertical jigging metal blade baits, and traditional jigs with soft plastics.

A net is essential in musky fishing and is non-negotiable in our opinion. Nets allow you to not only safely handle a musky, but also helps release muskies safely without harming the fish seriously.

Musky nets should be very big and feature deep bags, this ensure that a caught musky can remain in the water after being netted, and they can breathe and sit safely while you unhook the fish.

Glove aren’t a necessity but they are a good idea, especially for the novice musky angler.

Muskies have razor sharp teeth that can slice into your hands or fingers with ease. There are a few musky fishing specific gloves on the market that will protect your hands if you think it is essential.

Steel leaders like those made of seven strand wire are flexible, and offer exceptional strength and resistance at the cost of high visibility. While anglers still use seven strand styles of leaders, they definitely have fallen out of favor to fluorocarbon for most anglers.

Fluorocarbon leaders give anglers stealth as the fish cannot see the leader underwater, they are also very strong. Most anglers use leaders that have a pound test of 80-130 pounds, with the majority using 100 pound or higher test.

Regular inspection should be done with fluorocarbon leaders, especially after hooking fish, to ensure it doesn’t have any nicks or cuts.

Straight wire leaders are used mostly in conjunction with glide baits and jerkbaits, as the rigid construction gives better mechanical action to the lures.

Release tools are also essential and non-negotiable when it comes to musky gear, and you should have a selection of needle nose pliers of varying lengths, a quality bolt or hook cutters to cut out any severe or harmful hook ups, and a fish-friendly jaw spreaders.

Musky fishing requires certain tools to make your time on the water fun and safe for both you and the fish, and hopefully this post helped point you in the right direction!