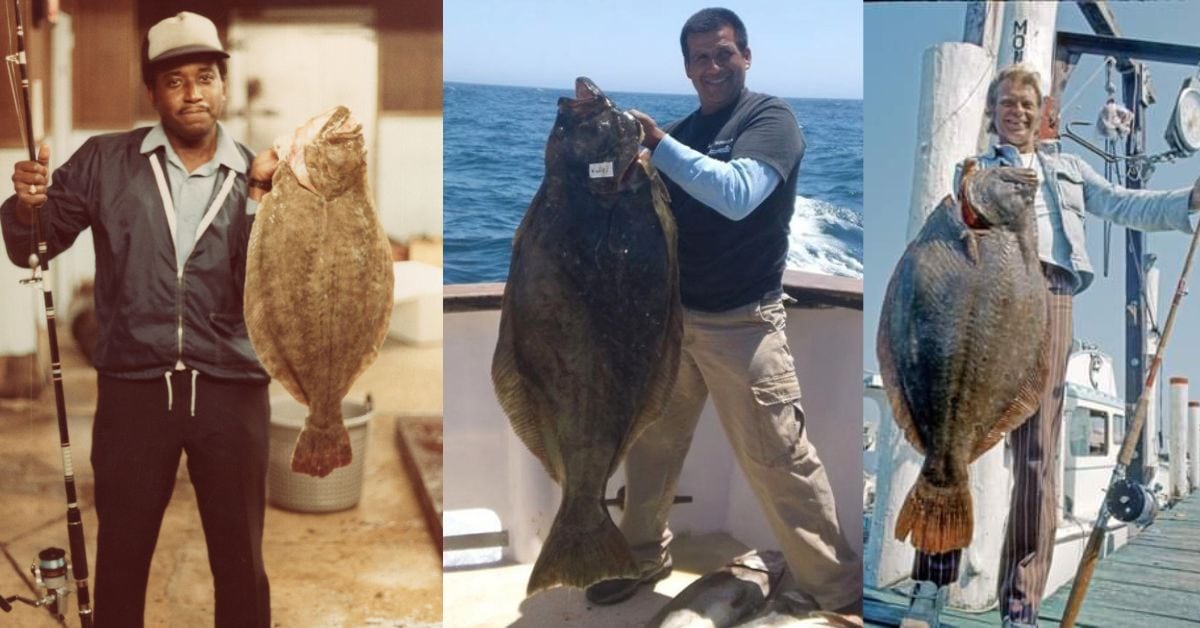 There are several different flounder species, each with its own world record catch.

While most of these fish are not particularly large, there are some that, for some reason, grow much larger than other fish of the same species. If you have been flounder fishing before, you’ll know that most are well under 10 pounds but, from time to time, you might find yourself with a 20+ pound monster flounder on your line.

This article looks at the details of some of these world-record flounder catches. We look into several flounder species, the anglers who caught the biggest of each one, and the fishing gear they were using at the time.

Details: Back in 1983, Larenza Mungin set out on a fishing trip with his Ocean City rod, Ryobi SX4N reel, and a Dolphin line baited with shrimp. He was bottom fishing in Nassau Sound, Florida, USA when he felt a fish take his bait.

The fish in question turned out to be a world-record southern flounder. The fish was so big that it is still the current world record catch.

The southern flounder that Larenza caught weighed in at 20 pounds 9 ounces and was an impressive 33 inches in length with a girth of 28 inches.

Details: When Captain Charles Nappi went fishing off of Montauk in mid-September all the way back in 1975, he was using a Berkeley rod, Penn 68 reel, Handy mono line, and a snapper lure.

It was with this gear that he successfully landed a big flounder.

Captain Charles’s world record summer flounder (also known as fluke), weighed in at 22 pounds 7 ounces and was 35 inches in length. Impressively, the gith of the fish was only an inch smaller than its length at 34 inches.

This is one flounder world record that came very close to being broken in 2007 by angler Monica Oswald. She caught a fluke weighing 24 pounds which would have beat the current record by a little under 2 pounds.

Unfortunately for Monica though, the IGFA disqualified her record claim after she disclosed that she had rested her rod on a railing during her fight with the giant flatfish.

The IGFA (International Game Fish Association) has very strict rules and requirements surrounding the world records they recognize. Monica Oswald was unlucky in 2007 but her catch does show that even bigger fish are out there.

He was bottom fishing when the soon-to-be world record winter flounder was on his line and on its way into the record books. Despite being one of the smaller world records on this list, the seven-pound lemon sole was more than enough to hold the title for more than three decades and still going strong.

Details: When fisherman Andrew Kleinberg was fishing in Bolinas, California, he was using a Calstar rod, an Abu Garcia reel, and an izorline line. He was jigging when he managed to catch the biggest starry flounder the IGFA had ever heard of.

The fish had a girth of 27 inches which was actually bigger than its length of 26 inches.

For a 10-pound fish, Andrew’s catch certainly had some impressive size to it.

Details: California flounder (also known as California halibut) can grow to some truly impressive sizes. Angler Francisco J. Rivera managed to catch the biggest halibut of this species when he landed a fish that weighed 67 pounds 5 ounces. This giant fish was 44.5 inches long and it had a girth of 39 inches.

When Francisco caught his record-breaking flounder, he was using a Calstar rod, a Penn reel, and an Ande line baited with live squid.

He was bottom fishing when the monster California flounder took the bait and ended up in the record books.

About US Flounder species

These fish are distributed in Atlantic coastal waters and are abundant in many waters around the US.

Flounder are carnivorous fish meaning they eat other animals. Depending on the size, age, and species of the individual fish, their diet will have some variation.

Smaller flounder tend to feed on worms, plankton, fish larvae, and other small prey while larger flounder like to eat fish, crabs, shrimp, and other similar-sized animals.

Flounder are considered an excellent fish for eating. They have a somewhat tough feel to them but they taste great and they are pretty healthy too.

These fish are nutrient-rich so are great for people looking to eat healthily while still eating great-tasting food.

Bottom fishing with live bait such as shrimp, crabs, sardines, or even smaller flounder can bring good levels of success.

Moving your bait regularly and releasing line from the spool so your line and your bait move around in the water can be helpful too.