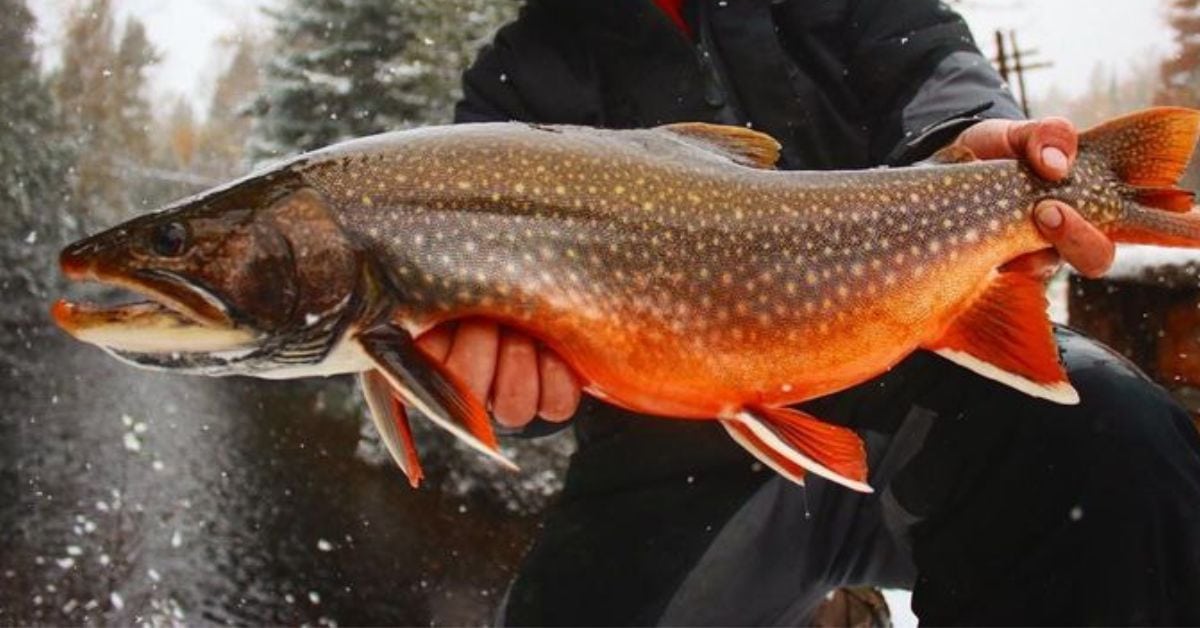 What is a Splake?

The Splake is not technically a different species of trout, but a hybrid between two trout species: the lake trout and the brook trout.

Lake trout and brook trout aren’t actually trout at all, technically speaking, and are members of the char family.

The splake, like many fish hybrids, are sterile and typically cannot reproduce; this makes them great for stocking programs with wildlife agencies, as there is no risk of long-term damage to an ecosystem if they are introduced.

They will eventually die out naturally, or from angling harvest if it is decided that stocking should be discontinued.

Splake vs Lake Trout: Ways to Tell the Difference

These tips below can help you with splake identification.

The splake exhibits faster growth rates than both of their parent species and can reach lengths of up to 18 inches.

The lake trout grows much larger than a splake, and fish weighing anywhere from 15 to 30 pounds and lengths of 24-36 inches is not that uncommon, especially in the northern reaches of their range.

The biology of the splake is a blend between their two parent species, and they exhibit a similar shape, size, and color scheme.

There are ways to distinguish a splake from their parent species, and we will take a look at some of the species indicators below.

The splake has markings that are more consistent with their lake trout mother, but they also exhibit the bright orange belly coloration that is found on their brook trout fathers, including the prominent white markings on the fins.

Unlike the bright belly coloration of a spawning brook trout, the lake trout exhibits a cream to yellow/slight orange tint on their bellies when sporting their spawning “dress.”

The body shape of both the splake and the lake trout are very similar, and looking at these fish by body shape alone is likely not to help an angler distinguish between the two.

There is one body shape consideration that can help, and that is the tail shape.

The tail shape of the splake is the middle ground between a brook trout and a lake trout.

brook trout have a pointed tail fin that has very like in terms of a fork, while a lake trout has a tail fin with rounded tips and a deeply forked tail compared to the brook trout.

The splake being the offspring of both a lake trout and a brook trout means that their tails are a mix of both of these species, with a sharper tail tips that are more angled, and a forked center that is more comparable to a lake trout.

The tail coloration of a splake exhibits the coloration that resembles a brook trout more than the lake trout, with an orange/red coloration and a lack of cream color spots.

Where to find them

Splake can be found in the same areas you would find both brook trout and lake trout but exhibit a habitat preference that is more aligned with a lake trout.

While brook trout often inhabit small streams and creeks, the splake prefers the deeper and colder water of oligotrophic lakes like the lake trout.

Finding the splake is similar to the lake trout in the deep lakes where they are found, and the deep water basins, thermoclines, and rocky outcrops and reefs are likely to be holding fish.

You can catch splake using the same methods as used for most salmonid species. Presentations like trolling or vertical jigging in the deep water environments that they inhabit is typically the best approach.

Where splake inhabit shallower environments like a river or lake shore, then fly fishing is a suitable way to target them, along with using lures like inline spinners.

Jigs, blade baits, live bait can work well when jigging either on structure or when vertical jigging in open water.

Where to find them

Lake trout are cold-water fish that typically inhabit medium to large lakes which have clear water and are very deep.

The location of lake trout can vary throughout the year, and they can be found on shallower reefs and rocky areas during the early spring, fall, and winter months.

during the summer months, when water temperatures climb, the lake trout will inhabit the deep water areas of the lake and in many cases, will be found near or below the thermocline.

Vertical jigging for lakers in deep water is the most common presentation used to catch them. (See our full article for more info on how to catch lake trout).

Blade baits and jigs with live bait or soft plastics work well, and in many places, anglers use tube jigs as their lure of choice.

The splake, being the offspring of the brook trout and the lake trout, share parts of both parent species, but with a little knowledge of their anatomy and appearance, it is fairly easy to distinguish if you are dealing with a splake or a lake trout.