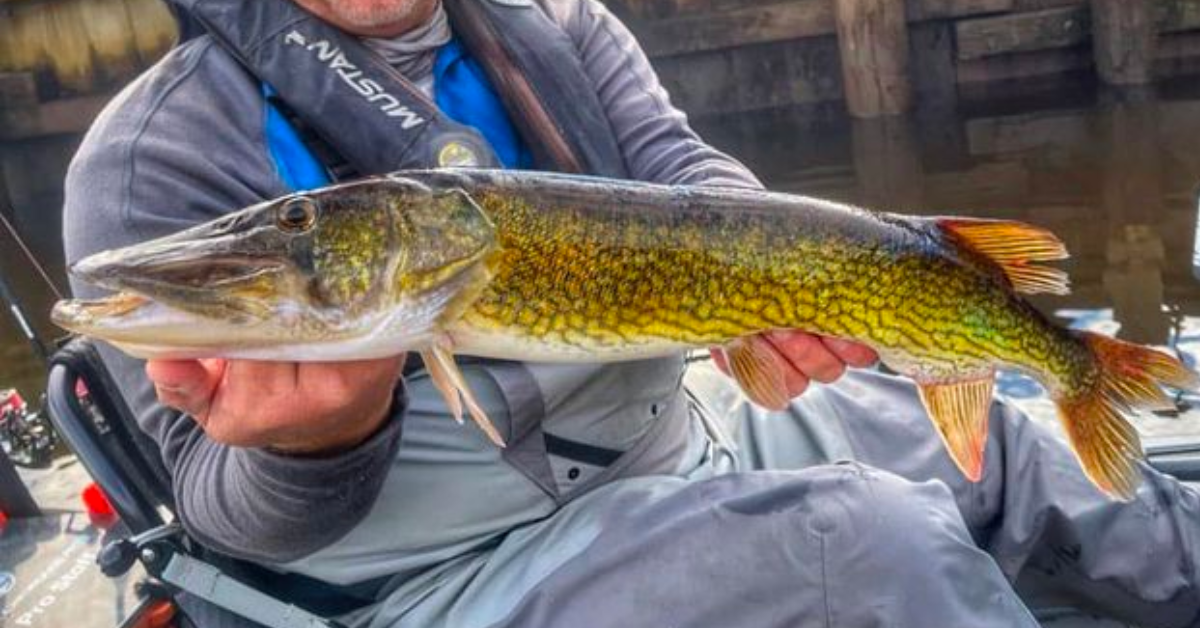 On a rural back road in Clinch County, Georgia a historical marker identifies an ancient trading post and dam constructed on Guest Millpond. In the 1850s and 1860s, the dam powered a grist mill that provided flour and meal to the rural community. Next to that historical plaque, another marker stands. It gives details about the IGFA Word Record Chain Pickerel of 9lb and 6oz caught by Baxley McQuaig on that waterway in 1961.

Guest Millpond is a 669-acre lake near Douglas, Georgia. The lake is heavily populated with crappie and bass, but it was an American pickerel (Esox Genus: Esox Niger), a grass pike, pulled from the lake on February 17, 1961 that set a new state record and IGFA All-Tackle World Record. On that day, Baxley McQuaig was throwing a Johnson’s spoon into cover and hooked the massive pike.

This fish broke the Massachusetts state record and became the All Tackle World record fish, but there were some problems with the reporting. According to Mrs Martin, the fish was caught on Pontoosuc Lake with a tip up, rather than a rod and reel. Even though this chain pickerel was disqualified in the annual Field and Stream competition, which offered prize money of $8000, it still set a new state record for weight and length.

The official record shows the fish was caught on a tip-up while ice fishing on Laurel Lake. This location was different than what Mrs. Martin first reported. A later interview proved Laurel Lake to be the actual fishing location. This discrepancy could have voided the game fishing federation pike record. An investigation was launched and other evidence collected, but it didn’t matter because McQuaig caught his fish and the records were changed.

The current All Tackle Length Record belongs to Burnie Haney. He caught a chain pickerel that measured 25.59 inches at Henderson Harbor in Lake Ontario, New York on November 4, 2019.

Mr. Haney, who works as a captain and fishing guide on Lake Ontario has much experience leading anglers to chain pickerel and their larger cousins, the northern pike. Haney has caught many large fish in this same general location using soft plastics and eight to fifteen pound line. Chain pickerels are a native species to the big lake and thrive in the near freezing water temperatures.

Fly fishing for pickerel is exciting because the fish are so territorial and will attack any prey that enters their area. Because the fish species usually grows to only one to three pounds, a lightweight fly rod is the ideal set up for a little fishing fun.

In February 2022, Paul Heinold was bass fishing with a 6 weight fly rod tipped with sinking line and a hand tied Clouser variation when he hooked something that felt different from the bass he had been catching all day. According to Heinold, the fish didn’t hit like a bass and it dove and changed course frequently. Being an avid angler, Heinold was able to immediately recognize that it was a pickerel. What surprised him, though, was the size of the fish. When he saw it break the surface, he knew it was big. The pickerel set a new Maryland State record and also broke the IGFA record for chain pickerel taken on a fly.

The American Pickerel, also known as the southern pike, eastern pickerel, reticulated pickerel, and jackfish, is a fish species that weighs between one and three pounds and reaches lengths from 15-17 inches.

The fish earns its name from the black chain link pattern that covers the sides of its dark green skin. This marking also covers the cheeks and gill covers of this long, slender fish.

Like its cousin, the northern pike, chain pickerel are strong and aggressive with sharp, needle-like teeth that rip and shred prey as they eat. The pickerel is an ambush hunter and will hide under aquatic vegetation and wait for baitfish to swim close by. This trick is the reason some anglers call the fish a grass pickerel or grass pike.

The chain pickerel is related to the northern pike and the muskellunge and frequents many of the same waterways, preferring cool water temperatures. The pickerel lives in many river systems and ponds along the Eastern seaboard of the United States and Canada. The fish travels in waters east of the Mississippi River and will move north and south to find a site with comfortable temperatures. The fish species also inhabits many freshwater lakes and reservoirs, as far south as Florida. In 1971, a chain pickerel caught on Lake Talquin in Quincy set a Florida state record at 8 pounds.

Fishing for pickerel is fun, especially in the early spring when they are aggressive and active. Spawning occurs when the water nears 50 degrees Fahrenheit. Females lay up to 50,000 eggs in long, rope-like strands, but do not guard a nest like other fish species. Instead, they swim off in search of baitfish and crayfish to replenish strength.

Anglers will find pickerel hiding under structure such as docks, around stumps, and under weed beds and brush piles. The fish will readily hit any lure or fly they encounter, including soft plastics like paddle tail jigs or artificial frogs. Once they bite down with those sharp teeth, the fight is on.

Many anglers worry that the fish will be able to bite through the line, but a good quality 8 pound line will hold up to the battle without breaking. The trick to catching chain pickerel is patience. While they do sometimes swim together, the pickerel is mostly a solitary fish that prefers hunting alone. Look for them where you see baitfish breaking the surface. In moving water, search near stream inlets, along drop offs, and in sunken cover. Reel all the way to the boat, because pickerel have been known to snatch the bait at the last possible minute. In ponds and lakes, find cover and fish shallow banks rather than open water.