The World’s Biggest Bass Pro Shop: A Visit To The Pyramid 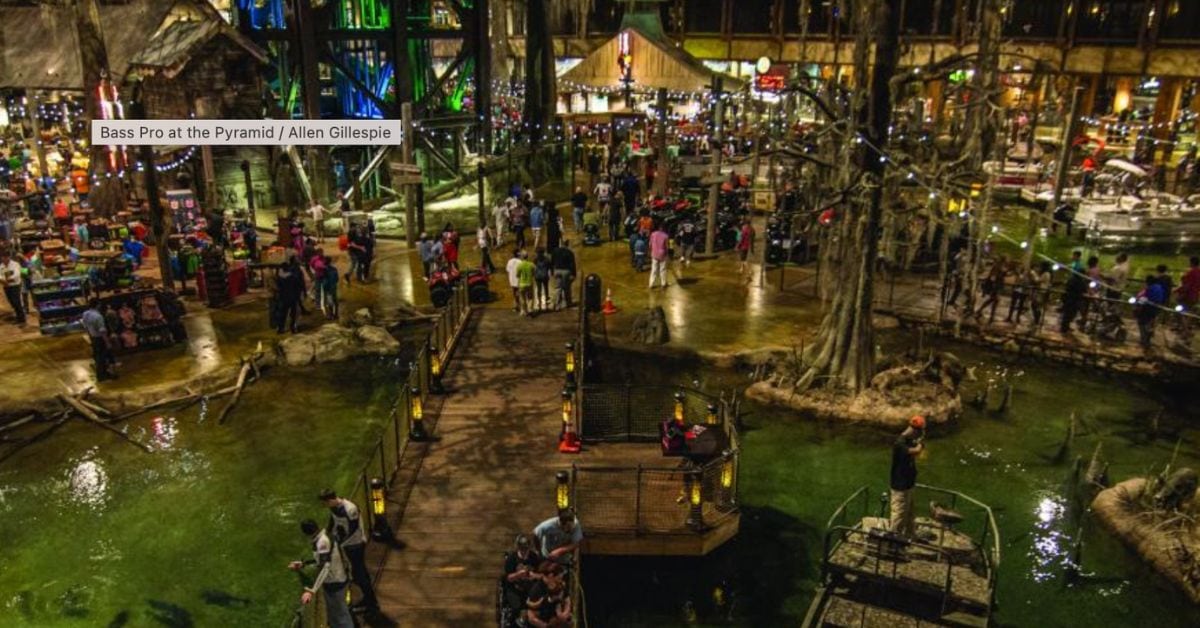 It’s one of those things that proves the old adage that truth is stranger than fiction.

The biggest Bass Pro shop in the world is situated in a giant pyramid in Memphis, Tennessee!

The Bass Pro Pyramid boasts more than 530,000 square feet of floor space, eclipsing the next largest store in Springfield, Missouri.

How Big Is The Memphis Pyramid?

The base is said to be the size of 55 football fields.

The faces of the pyramid are covered in more than 8,384 stainless steel panels that cover 6.9 acres.

Why Build A Pyramid In Memphis?

The Pyramid in Memphis – originally dubbed The Great American Pyramid – was built more than 30 years with largely public funds. The original plan for the building included an aquarium, a branch of the Hard Rock Cafe, a college football hall of fame and a country music radio station!

The Largest Bass Pro Shop In The World

In 2015, the Pyramid re-opened as a Bass Pro Shops megastore, which included shopping, a hotel, restaurants, a bowling alley, and an archery range, with an outdoor observation deck adjacent to its apex.

The decision to create the world’s largest Bass Pro inside the then defunct Memphis Pyramid was not an easy one and there is a neat story behind it.

Bass Pro Shops founder Johnny Morris had a fishing trip planned on the Mississippi River with TV fishing star Bill Dance and had been asking the veteran angler about the viability of setting up and indoor swamp and a Bass Pro store inside the pyramid.

Dance shrugged off the inquiries from Morris saying Memphis was a hub for a number of industries and activities and the pyramid was an iconic building, but he wasn’t about to tell the billionaire which way to jump on a decision involving this level of investment.

The mental tussle over whether to commit to the pyramid or not still wasn’t resolved when they took to the waters of the Mississippi. Dance suggested that if they caught a trophy sized catfish, then that was a sufficiently good omen to commission the store.

The first day of the trip passed without a fish of significance being landed. Late on the second day though, the third member of the fishing party, Jack Emmitt caught a 34-pound blue catfish almost under the shadow of the Pyramid effectively sealing the $500m investment needed to build the store.

Is the Bass Pro Pyramid Bigger than the Egyptian pyramids?

It is said to be one of the 10 tallest pyramids in the world. It is smaller than the main Egyptian pyramids, but taller than some of the Mayan and Aztec pyramids in Mexico.

Is The Bass Pro Pyramid Cursed?

Well Egyptian pyramids, or more precisely those who have defiled them, can be said to be curse. And the Pyramid has certainly had a checkered history. It has been used to host basketball matches, boxing fights and concerts and was the home of the Memphis Grizzlies until 2004, when it was shut down amid mounting financial difficulties.

Bass Pro Moving In to the Pyramid

Bass Pro Shops signed a 55-year lease for the pyramid in 2015 and it was reopened after extensive renovations.

The Pyramid is now home to an aquarium, a hotel, an archery range, a shooting range, and a laser arcade, in addition to the world’s largest Bass Pro shop.

Over 3 million people visited Bass Pro Shops at the Pyramid in the first year.

Visitors to the Bass Pro Shops store are often overwhelmed by the scale of it. There are numerous display and myriad different items of fishing and hunting equipment.

There is elevator that you can take to the top floor and a balcony you can step out on to the take in the view.

You can practice shooting at a 25-yard live pistol and archery range.

There is also a bowling alley, restaurants and a range of shops at the pyramid.

Can You Fish at the Bass Pro Pyramid?

The waters at the Bass Pro Shops pyramid are stocked with largemouth bass and 35 other species – including alligators. I am not aware if the general public can fish for them, but Bass Pro has opened up the ponds to pro bass fishers for product launches and other promotional opportunities.

Can you Stay at the Bass Pro Shops Big Cypress Lodge?

Yes, the pyramid is home to its very own hotel – the Big Cypress Lodge. It is a 103-room wilderness-themed hotel. The rooms at Big Cypress Lodge are luxurious with country touches and some have views of the Mississippi River.

Each of the 103 rooms is designed like a hunting lodge with with mounted animals (including a moose in one room), chandeliers made out of antlers and other frontier touches.