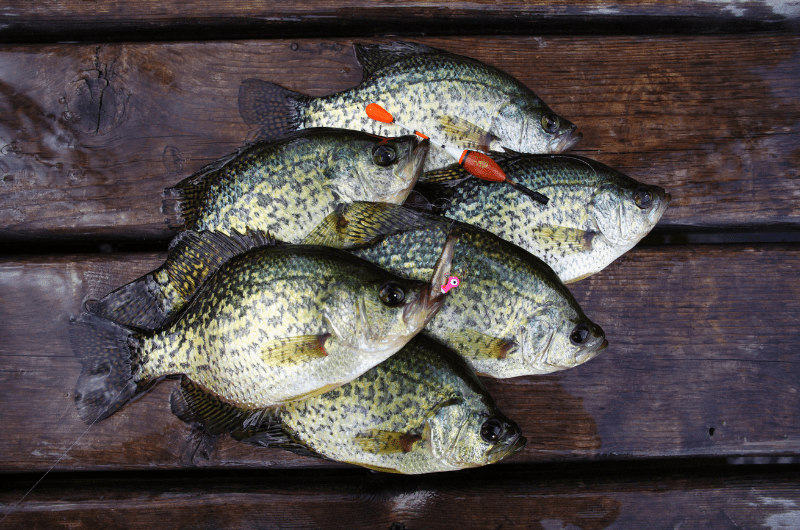 A crappie is a crappie, right? Well, yes and no. While all crappie belong to the sunfish family Centrarchidae and the genus Pomoxis, there are actually seven different species of crappie recognized by the IGFA. Key differences between the fish are related to physical markings. Often, crappie anglers are shocked to discover that black and white crappie are distinctly different species. This article will help you learn the differences between these two species, as these are the most common varieties.

All crappie are members of the sunfish family, the same scientific family as bluegill and bass. Crappie are a much sought after game fish because of the thrill of the catch and the sweet taste of the white, flaky meat. Both the white and black crappie live in freshwater lakes, ponds, rivers, and reservoirs throughout the United States and other parts of the world. Crappie angling is one of the fastest growing sports among recreational fishermen. According to the USFWS, crappie fishing has increased over 20% in the last ten years. So, what makes these fish so desirable, and are there noticeable differences between the black and white crappie?

Black crappie, Pomoxis Nigromaculatus, are named for their dark colored bodies, but can actually be lighter in color than white crappie in certain water conditions. It is not the color, but the pattern that helps distinguish white and black crappies.

Black crappie grow at a rate of up to four inches per year. The most rapid growth takes place in their first two years of life, and adult black crappies rarely reach lengths over 10″. Female and male crappies grow to the same length and there is no way to tell the difference based on length.

Black crappie distribution within the US

Black crappie weigh about two pounds at adulthood, although some larger specimens have been recorded. The IGFA world record black crappie weighed 5 pounds 7 ounces. This atypical fish was found in a freshwater pond in Tennessee.

Black crappie feed primarily on small invertebrates for the first six months of their lives. Worms, bugs, and tadpoles are popular foods for black crappie. Young crappie will also feed on zooplankton and algae that occurs in areas of heavy vegetation.

The male black crappie will dig out sand beds 2-6 feet of water, when water temperatures rise to over 68°. He will then guard his nest for two to three days before allowing a female black crappie to deposit her eggs. During reproduction, spawning black crappies can lay around 11,000 eggs at a time.

Black crappies can live to be up to seven years old.

Black crappie has delicate, flavorful meat that is white and flaky when properly cooked. Pan-fried crappie is considered a delicacy in the southern United States.

White crappie and black crappie look the same to the untrained eye. It is hard to tell the difference unless you know exactly what to look for. The most obvious difference is the markings on the body. Other key differences include the number of needle like spines on the dorsal fin and the shape of the mouth.

White Crappie Distribution within the US

White crappies can be found along the Atlantic Coast and in the states bordering the Gulf of Mexico. Studies have located more white crappie in large rivers and streams, compared to black crappie in the same water bodies. Both species have been located in freshwater reservoirs and lakes in Florida, Alabama, and Texas.

White crappies will feed on bugs and invertebrates when they are young, but larger white crappies tend to alter their diet to include more minnows and small fish. Black crappie, even as adults, continue to feed on insects, so the white crappies diet of fish might be in part due to its larger mouth.

The male fish prepares a nest on the muddy bottom near the banks of the river. Usually, this nest is in one to four feet of water. The female settles into the nest and lays around 9,000 eggs, which the male then fertilizes. The male guards the nest until the fry move into open water in large schools.

In terms of life expectancy, white crappie can live up to nine years.

White crappie are social fish and tend to swim in schools. They inhabit fresh water reservoirs, and large rivers and lakes. They prefer to be out in open water, unlike the black crappie that hides in cover.

White crappie fillets are delicious, and many connoisseurs say white crappie is sweeter than black crappie. This could partially be attributed to the differences in diet between the two species.

Both black and white crappie have a silvery grey body, with dark markings scattered over the body and fins. It is the pattern of these markings that identifies the two crappie species.

White crappie tend to be lighter in color but their markings are the key difference that discerns white crappie vs black crappie. The natural markings on white crappies appear as vertical bars running down the sides of the body. These are more identifiable as a pattern than the random dark spots on the black crappie.

Both male and female crappie have similar markings, and there is no evident difference in coloring between males and females, except during spawning season. During spawning, the belly of the male crappie will turn black. The female will remain her natural color, but her belly will be bloated with eggs.

Because coloring alone is not the best indicator of crappie species, dorsal fin examination is the most reliable method of identification when determining white crappie vs black crappie. White crappie will have five or six dorsal spines, whereas black crappie have seven or eight spines along the dorsal fin.

Distribution in the US

You can find white crappies in the warm waters of the lower United States. Black crappie have been found more plentiful in lakes and ponds, while white seem more populous in rivers and streams, but both species can be found in the same water body, along with many other fish.

As far as crappie anglers are concerned, both species are desired. These small fish are easily found in freshwater reservoirs, large rivers, and naturally occurring lakes and ponds. Catching crappie is exciting, and both white and black crappie are easily caught using live bait or jigs.