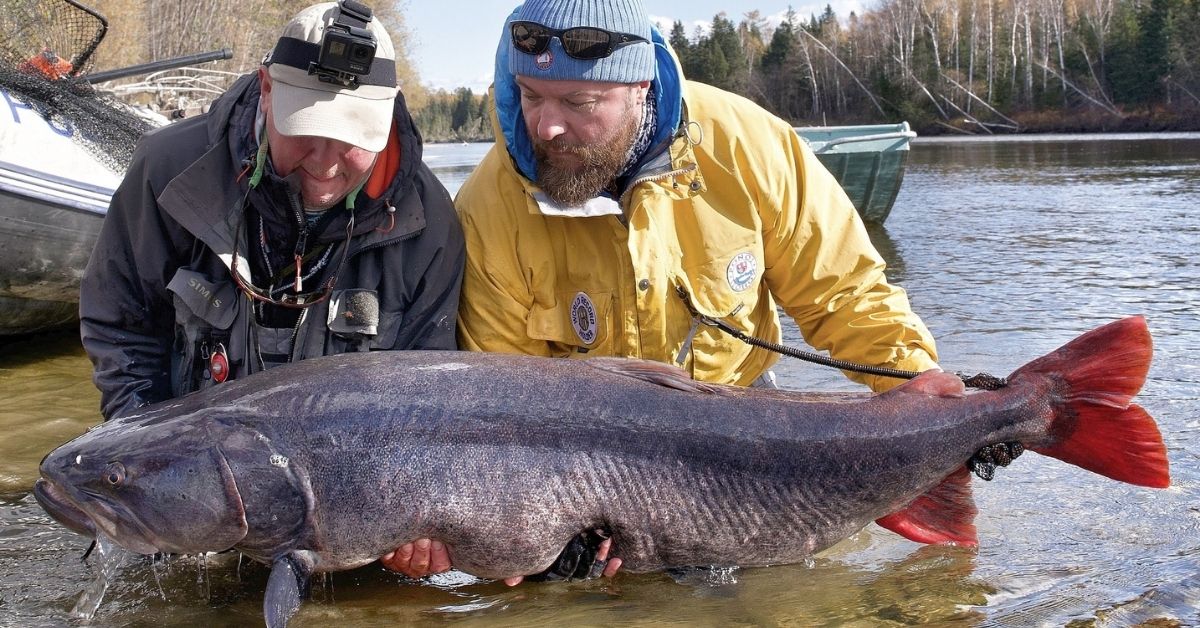 The taimen is also known as the River Wolf for its predatory hunting behaviour. It’s been known to eat rats, mice, ducks and even squirrels, although it is large a pescavore feeding heavily on grayling and lennock and other smaller fish.

For fly anglers the taimen is the ultimate target and many travel to Mongolia and Russia to test their skills against the largest salmonid in the world.

The owner of the Ponoi River company, Sherbovich, hooked his record breaking taimen on a pink streamer. After a 25-minute battle, the record fish was weighed and released.

Sherbovich holds a swag of taimen tippet class world records, many of them caught in the Tugur – a remote river in eastern river that must be accessed by helicopter.

The rivers of Siberia and far eastern Russia near the former island penal colony of Sakhalin are the most productive for supersized taimen.

Sherbovich, a fly angler since age four, talks about some of his world record taimen catches in his personal website. He is also the owner of Ponoi River Company, which offers guided fishing on the remote Atlantic salmon river from the Ryabaga Camp.

Illya is dedicated to the protection of wild salmon, the promotion of catch-and-release, and other conservation related activities.

Fly fishing for taimen can be done from the shore or a raft and usually involves casting large, long streamers across and down to likely spots where taimen wait in ambush.

Taimen can be fished for with single handed rods or spey rods. Spey rods allow for arguably more efficient casting as this is a fish that sometimes requires numerous presentations to induce a strike.

For the average angler, taimen fishing as a DYI proposition is too difficult – the rivers are too remote and too hard to reach to make this a reliable prospect.

There are many outfitters that take fly fishermen and women into the wilderness to fish for taimen in the large freestone rivers of Mongolia and Russia.

Anadromous Taimen in Japan and Russia

Far eastern Russian, and northern Japan, is also home to an anadromous species of Taimen – the Sakhalin taimen or Japanese taimen (hucho Perryi). This species is at home in estuarine waters and river mouths.

They are a wonderful sportfish too and fly fishing anglers can sight cast to prowling taimen or striper streamers or surface flies in likely areas.

Fly anglers practice catch and release fishing for taimen and are actively involved in local efforts to preserve taimen stocks. Taimen require clean water to live, feed and breed and that means rivers with undisturbed catchments and unbroken flows.