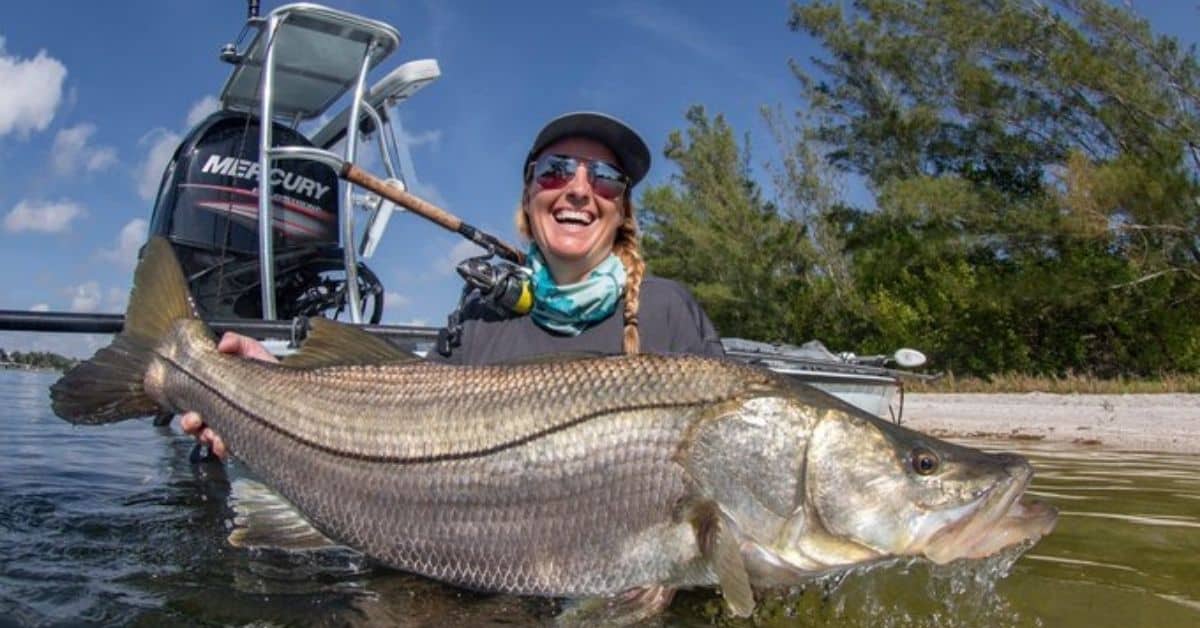 Snook are a popular game fish for their size, their fighting ability and their taste.

But what’s the biggest snook ever caught? In this article we go through record snook captures across the various species, starting with the largest of them all – the 59lb Pacific black snook caught off Costa Rica in 2014.

Which Species of Snook Grows the Largest?

The Pacific Black Snook is generally thought to be the largest of the 12 snook species and the IGFA record for this species is larger than for any of the other 11 snook varieties.

The largest of the standing IGFA all-tackle snook records is the 59lb 8oz fish caught off Puerto Quepos in Costa Rica by Captain Ward Michaels in 2014.

The Monster Snook was caught on 65lb line when Michaels was surf fishing with a live sardine.

IGFA Snook Records for other Species

This is another large species from the centropomus (snook) genus.

Wesley Brough is a guide who fishes frequently at Cabo San Lucas, a resort city on Baja California’s tip. He hooked the white snook fishing from the surf in with a large Savage Gear Mackstick. After a 10 minute battle with the massive snook he was able to beach the fish and take it over to Minervas Baja Tackle for an official weighing. As the IGFA release on this catch said: “With this fish he set the IGFA All-Tackle World Record for the species, besting the previous fish by nearly four pounds! Congratulations on another amazing fish Wesley!”

The Common Snook is an Atlantic Ocean snook species that grows very large. The IGA all-tackle world record for the Common Snook is a 53lb fish caught by Gilbert Ponzi at Parismina Ranch in Costa Rica. The monster snook was caught on a bucktail jig.

The state record snook was caught in Fort Myers on April 25, 1984, by Robert De Cosmo and weighed 44 pounds, 3 ounces. Florida angler Zak Kahelin may well have landed a larger snook than this with a fish that was estimated at 55-60lb lbs.

As the local media reported, the potential word record breaker had to be released because the snook season is closed in June, July and August. Kahelin, who was 15 at the time, caught the big snook on on a live herring, 15-pound line with a 30-pound leader, an ABU Garcia baitcaster and a Mitchell Spidercast rod.

Angler and artist Regina Gallant Artist caught a 27-pound snook on six-pound test line while wading in the shallows of Indian River Lagoon near Sebastian Inlet with boyfriend Adrian Gray, Vero News reported. The couple weighed, measured and photographed the giant snook, then put it back in the water to swim away. The fish, which was certified by IGFA, beat the current women’s six-pound test mark of 23 pounds for snook caught in Jupiter in 1995.