Why Hobie Kayaks Are The Best Choice for Fishing 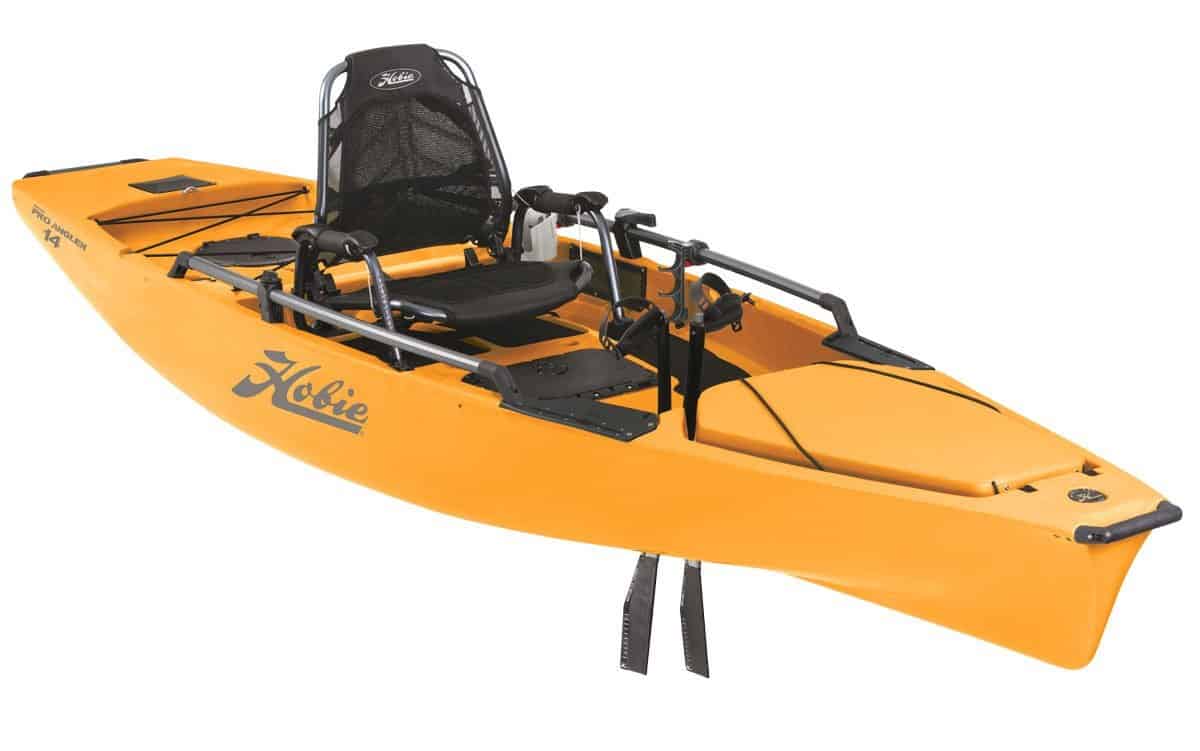 We invited our kayak fishing expert, Hamish Cross, to explain why Hobie kayaks are the best choice for serious fishermen and women.

As you’ll read, he’s a passionate fisherman and the proud owner of TWO Hobie kayaks – the Hobie Outback and the Hobie Pro Angler 14.

In this article Hamish explains:

Over to you Hamish …

I have been fishing since I was four and after a prolonged hiatus due to relocating to London for 10 years, I rediscovered my obsession on my return to Melbourne, Australia.

If you have fished around any major city or tourist destination you will know that many fishing places are overcrowded and overfished. Meaning that you can spend an entire day fishing to catch a single fish. If you catch a couple of fish, this is considered a really good day.

Kayak fishing allows you to get away from the crowded shores and move out into open water, chasing a wider variety of fish. You can also do things in a kayak that you can’t do in a boat or from land. A bust up of fish when approached by a kayak will rarely spook, whereas a boat coming near a bust up will often halt the action.

Fishing soft plastics from a kayak, you can cruise around casting and retrieving looking for where a school of fish is located either looking at feeding birds, bust ups or using your fish finder (check out our tips on reading a fish finder), and when you find them, you can keep yourself stationary by pedaling at the right pace.

I am most comfortable fishing when the wind is forecast below 10kts, however in some special circumstances I will go out when the winds are up to 20 knots. This is only if the weather is consistently steady, and blowing offshore, and my target species are within a few hundred metres of shore.

I bought my first kayak in 2014 and I can well remember from that time that looking at which kayak to buy was a very daunting task. When I purchased my kayak there was a number of different lengths, widths, construction materials, propulsion methods and manufacturers.

When I was looking for my first kayak, I did quite a bit of investigating around which model suited my requirements. My extensive searching and trawling of posts eventually led me to a forum post, where members voted on their reason for their choice of kayak.

In this poll, 65% of members owned or wanted to own pedal kayaks, 25% had paddle, 10% didn’t own a kayak. Almost a third of respondents either had moved, or were in the process of moving from paddle to pedal. With this information it helped me eliminate paddle kayaks, and narrow the selection down to pedal.

Today there are a number of pedal drive fishing kayak manufacturers, Perception, Native, Hobie, Old Town and Wilderness to name a few. When I bought my first kayak in 2014, Hobie was the dominant force in the kayak fishing market. They had a number of models, Revolution 13, Revolution 16, Outback, Pro Angler 12, Pro Angler 14, Adventure Island and a couple of paddle models.

Each model has their own pros and cons, with many sharing common features like pedal drive, roto moulded polyethylene and steering with a rudder positioned by a hand lever.

Why pick pedal over paddle?

Pedal drives for the most part don’t require training to operate. Paddle is in the inverse of this, and when operated incorrectly can put undue strain on the body and can be inefficient based on technique. Pedal utilises the biggest muscle group in the body (glutes) which means a person with average fitness should be able to operate the vessel for a reasonable period of time. In addition, when actively fishing (trolling, casting lures etc), pedalling allows you to manoeuvre around while fishing which can be very useful when actively fishing, or when you’ve hooked into a big fish and you need to move around to get the fish out of snags.

One of my favourite things that I like to do in my Hobie is trawl for squid. This action which would not be possible in a paddle kayak sees me moving at approximately 1kmph across the water with two spinning rods cast behind. A double action bringing the rods forward quickly followed by a slow drop back as I move forward keeping the tension on the line. As the rod tip reaches a 45 degree angle to the kayak, the rods are quickly moved forward again with the double action. The number of times that I have used this technique to catch a bag of squid, while those with paddle kayaks are struggling to catch a single squid is too many to count. For this reason alone, if I could only have one class of kayak it would be pedal over paddle.

Hobie have been making fishing kayaks since 1996, and their pedal system, the Mirage drive since 1997. Their hulls are manufactured in the USA, and many of the early models, some over 10 years old and are still floating around today.

The Mirage drive, the propulsion system and the signature of many Hobies, has had many enhancements applied to it since it’s inception 1997. The drive allows for kayakers to move through shallow waters and to pass over submerged objects only drawing a couple of inches when idle or a few more inches when feathering.

The latest Pro Angler models allow for reverse and sideways movement. They have also introduced a model that “kicks-up” if you strike an object, protecting the drive.

The stability of today’s Hobies is a byproduct of having over 20 years of hull design. The primary and secondary stability means you can trust the kayak will not roll over easily, and in some cases, you will be able to use the kayak as a fishing platform (standing).

The Hobie kayak that I chose

For my first kayak I ultimately landed on the Hobie Outback. The biggest factors in my choice were size, weight and cost. The Outback weighs and costs considerably less than the Pro Angler models and is still an amazing fishing platform. 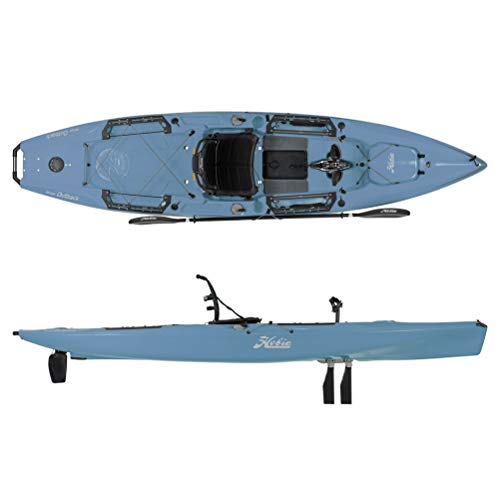 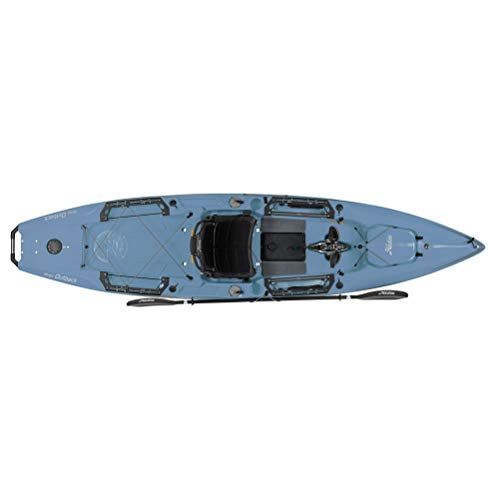 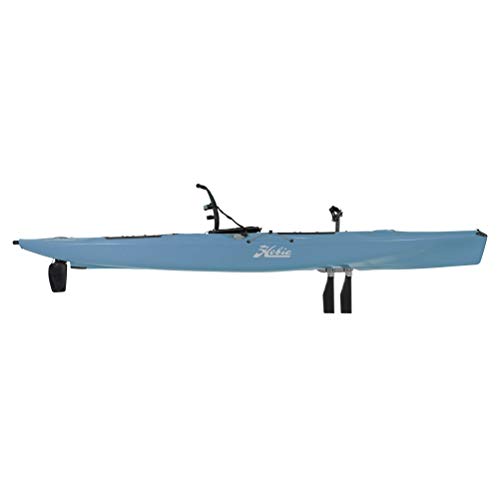 This fully-loaded fishing machine is built for every conceivable fishing expedition, whether you’re prowling the ocean for monster gamefish or stalking bass in your favorite freshwater fishing hole. Hobie has advanced the sport of kayak fishing with Kick-Up Fins that automatically retract upon impact.

Check it from HobieCheck Latest Price on Amazon

I wasn’t aware at the time that the Hobie Outback with an upgrade rudder is more manoeuvrable than a Pro Angler. It wasn’t until I later purchased a PA 14 (check out our Pro Angler 14 review here) that I found just how slow the big beast is to turn. You need forward momentum for the rudder to work, and getting the PA 14 to move often takes a few seconds. This isn’t just useful for fishing around structure, it’s very important when fishing in rough conditions. In these situations you need to be able to turn quickly into any waves that are moving in your direction. I find that beach landings with the smaller Outback are easier than the PA14 due to the size and weight difference.

My second kayak – the Pro Angler 14

After owning the Outback for about 5 years, I was keeping an eye out for PA 14 with the intention of being able to take my kids out, or to loan to friends. One day I got an alert of a listing well below the usual price listing and I immediately called the owner. After a brief discussion and talk about how the owner was a pro tournament fisherman I was in the car armed with cash. It picked it up, had it at my friend’s place the next day looking over the hull and on the water a few days after that.

After dreaming of a Pro Angler for many years, it wasn’t until I got on the water that I realised just how big the kayak was. I had to reach for things that would normally be at my side, and moving from trailer to water (and back) was far more  arduous.

The biggest benefit of course is the stability and extra space. You can doctor up a second seat behind the main seat, and in this you can add your little fisherperson to join you on calm days. You can also stand more easily in the Pro Angler 14 whereas the Outback requires a bit more finesse.

The Hobie PA 14 has already served me well, mostly allowing my friends to join me doing something that I love. Catching fish is exciting, but it pales in significance compared to seeing a friend catch their first big fish from a kayak. It’s also amazing to see friends who have previously owned eBay versions of fishing kayaks comment on how stable the Pro Angler is compared to their long departed $300 kayaks. 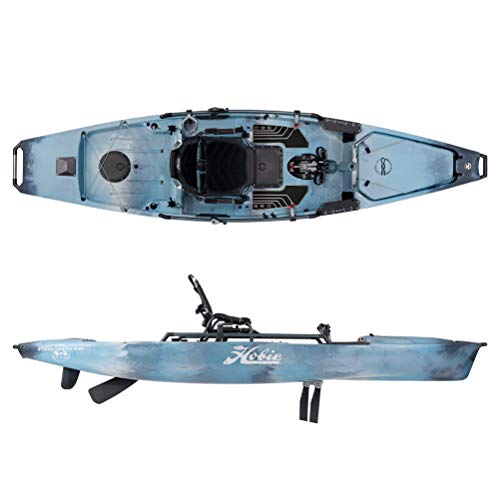 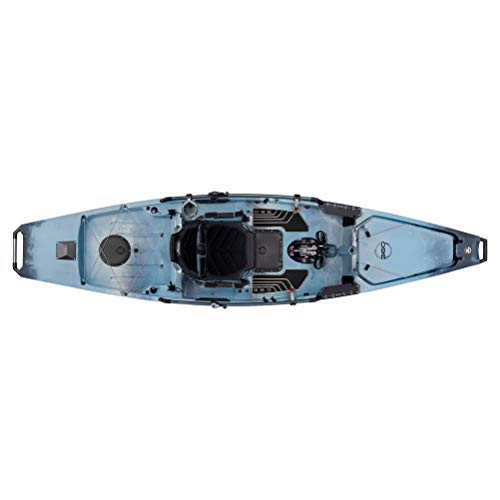 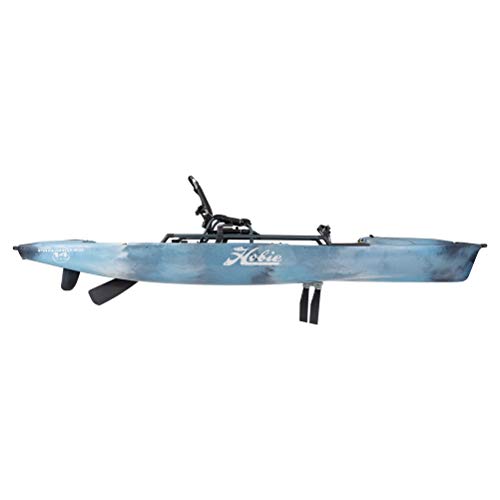 Check it from HobieCheck Latest Price on Amazon

Hobie are world renowned and have over 20 years of experience manufacturing both the kayaks and the propulsion systems.

If you want rod holders, your fish finder and everything else to be at arm’s length, limited ability to stand, and no desire to take kids with you on the kayak and money is of no object, choose an Outback. If money is a little tighter then look at the Hobie Compass or Passport.

If you have storage for a boat trailer, a large budget, or waistline, want to be able to stand easily then look at the Pro Angler 14.

The Pro Angler 14 has rod storage in the hull, that allows for flat rod storage. This means if you are fishing areas with low bridges, low tree growth etc, this can be very useful. It’s not recommended to transport delicate rods when transporting the kayak, as it can result in rods being broken when you hit large potholes/bumps on the road.

The PA14 also has enough space that you could in theory fish with a second smaller person (child) behind the primary fishing seat. This should be done with caution and only after you are experienced on the water and understand the limitations of kayak fishing with regards to weather/conditions/ etc

If you need to do beach launches and drag the kayak across sand or any soft surfaces, the PA14 is not for you. If you want to be able to stand in your kayak and sight cast with the aid of polarized sunglasses, or if you want to have large amounts of storage, the PA 14 should definitely be considered

If you want to launch from beaches, rooftop a kayak, or have tight turning circles the Outback should be in your shortlist.

Or you could bite the bullet – funds permitting – and own both!