Why are Yeti Coolers so Expensive? 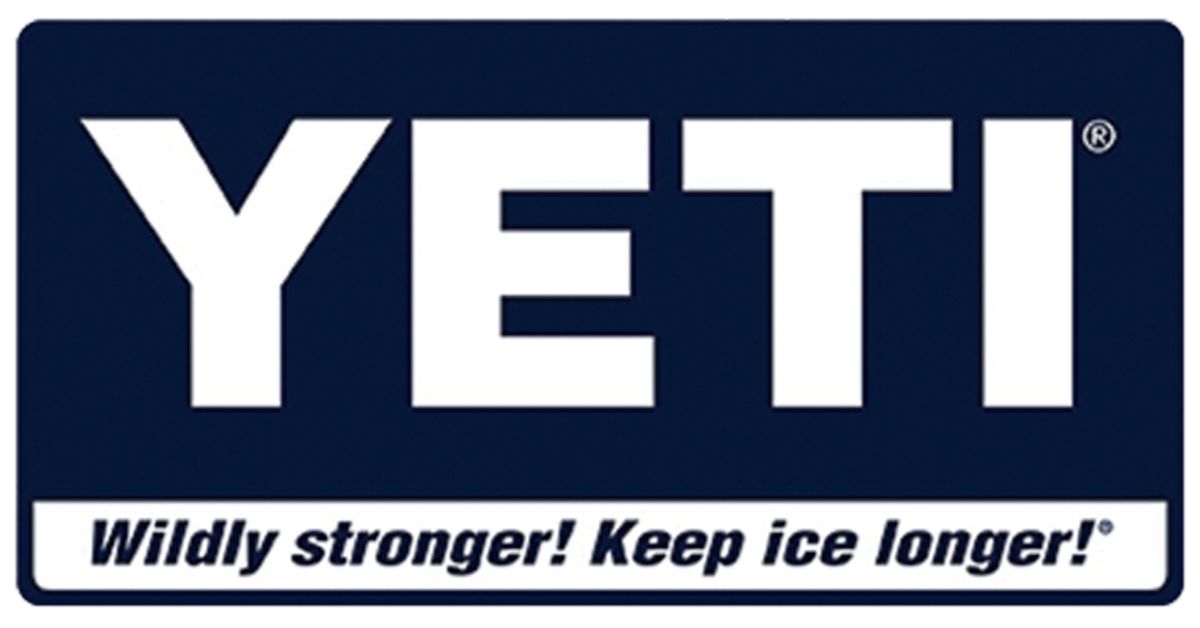 Why are Yeti Coolers so Expensive?

Anyone who is a fan of Yeti coolers knows that they usually come with a pretty big price tag. While some people are happy to take the financial hit in order to get their hands on these famous coolers, others like to take a bit of time to work out if it’s actually worth spending the money on them.

In this article, we look to answer the question – why are Yeti coolers so expensive? We discuss some of the reasons for the higher cost as well as looking at whether or not Yeti coolers are worth more than other Yeti cooler alternatives.

Why Are Yeti Coolers So Expensive? Are They Worth It?

You can buy regular coolers for only a few dollars. There are obviously some more expensive coolers out there too but there aren’t too many that are as tough as Yeti coolers.

Any Yeti cooler, particularly one with a hardshell, will be an extremely rugged cooler that can take a beating while out in the wild and still remain in one piece and perform exactly as expected.

This is partly why Yeti coolers are so expensive but the reasoning goes quite a bit deeper than this.

History of the Yeti Brand

If you look at the history of some of the most successful (and expensive) brands, they usually have an interesting story that helped shape them into the brands we see today. Yeti is no different and its brand history will likely play a part in why the brand’s coolers are so expensive.

Yeti began with two brothers who were keen fishermen. Spending lots of time out on the water, their needs for a cooler were that it had to keep things cool and fresh for a long time but it also needed to be tough enough for them to stand on and use as a fishing platform.

After finding a different cooler to the ones they were used to, they began using (and then importing and selling) this new type of cooler which was tougher, more durable, and all-round better than most coolers currently available. The main thing that made these coolers different was that they were rotomolded. This made the coolers thicker, heavier, and just generally extremely tough.

After realizing there were changes that could be made to make the design of the cooler even better and more appealing, the brothers began talks with a manufacturing plant in the Philippines. The changes the brothers made started them on the road to the expensive Yeti coolers we know and love today.

Yeti has been very clever in how they entered the cooler market.

Many small retail stores that specialized in fishing, hunting, or other outdoor activities rarely kept coolers in stock. The main reason was that, as they sold so cheaply, the profit margin was so small that it wasn’t really worth taking up shelf space for them.

When Yeti came into the market though, the coolers needed to be sold for around $300 due to the high costs of getting them made. This made them much more appealing to the small outdoor retail stores as they would only need to sell one or two a month to make it a worthwhile investment.

As coolers were a new addition to this type of store (as they didn’t bother to sell the cheap versions previously), the customer base (who pretty much all used coolers regularly) loved them and bought them in good numbers.

Once other outdoor enthusiasts realized how good Yeti coolers were, the high price point became less of an issue for the brand.

The Design and Manufacturing

Yeti coolers are made from rotomolded polyethylene. This basically means that the entire cooler is one piece rather than being made of multiple components. In very basic terms, this manufacturing process makes Yeti coolers pretty much indestructible.

The downside to these rotomolded cooler shells is that they are much more expensive to make than standard coolers. Anything that costs more to make has to be sold at a higher price in order to make it worthwhile and sustainable for the brand to continue.

Despite not being made from the same rotomolded polyethylene, even Yeti’s soft coolers come with a heavy price tag. These, usually smaller (but still equally as effective), coolers are also made with some interesting processes to make sure they do the job you need them to as well as possible.

All of these costly manufacturing processes are one of the main reasons why Yeti coolers are so expensive.

The Image Of The Yeti Brand

Over the years, Yeti has created an image of being a true sign of an outdoorsman. Unless you have a Yeti cooler with you on your fishing trips or outdoor adventures, you can’t really be seen as a true outdoor enthusiast.

This obviously isn’t true as the are many other brands out there that make coolers equal (if not better) than Yeti coolers. Thanks to the image the brand has created though, people are willing to pay a higher price to show themselves as a true lover of the outdoors.

A perfect example of this is that you can buy Yeti branded stickers and caps. These used to be given away with every cooler purchase to help promote the brand. Now though, people actually pay money to get their hands on this type of accessory and apparel, even if they don’t have a Yeti cooler themselves. They want to be a part of the outdoor community and they are willing to pay the price to do it.

Considering that some people will happily pay top dollar for branded caps and stickers, paying a higher price than you might otherwise do so to get your hands on one of the many Yeti coolers available means the brand can keep the expensive price tags in place. If people keep paying the price, there’s no point in reducing it.

Despite being extremely well made and some of the toughest coolers out there, your Yeti cooler can sometimes go wrong. As most coolers from Yeti come with a five-year warranty, the brand will repair any issue or replace your cooler free of charge for the first five years you own it.

While this is obviously appealing for customers buying the coolers, the brand has to account for these free repairs and replacements in their business plan. The easiest way to do that is to charge more for the coolers in the first place.

You might be really pleased with the warranty on your new Yeti cooler but it’s worth keeping in mind that it is one of the things that make Yeti coolers so expensive.

Yeti coolers are known for being made to extremely high standards. They may be expensive coolers and you can certainly tell that just by looking at the quality craftsmanship and the finish each one of them has.

We’ve said it before and we will say it again, there are cheaper options out there when it comes to coolers. However, if you want guaranteed quality, finish, and performance, you can’t really go wrong with a Yeti cooler.

Your Yeti cooler will come with many features that other coolers simply won’t. Things like the t-rex lid latches, tie-down slots, the neverfail hinge system, and many more – Yeti coolers are full of interesting and very practical features.

There are also accessories that can be added to your Yeti cooler that can increase its practicality and convenience even more. From ice packs, additional storage, and attachments, Yeti coolers cover a lot of ground when it comes to useful features.

When you look at all the things your Yeti cooler can do, it’s pretty easy to see that the brand is big on innovation.

Yeti is known for overengineering all of its products and Yeti coolers are no exception to this. The brand comes up with new features, new technologies, or new innovations on a fairly consistent basis. This means that people must be constantly working on potential ideas that could be the next big thing for Yeti.

When you look at how much time, effort, and money this takes, it could be enough to make Yeti coolers worth their high price tags.

What is the Most Expensive Yeti Cooler? 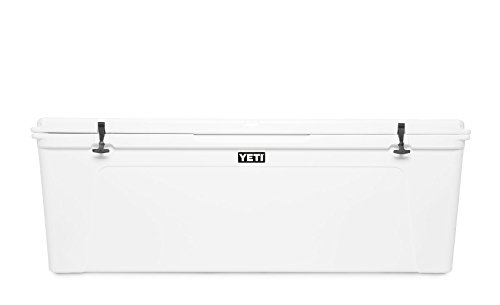 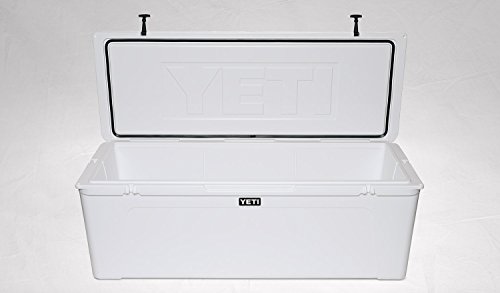 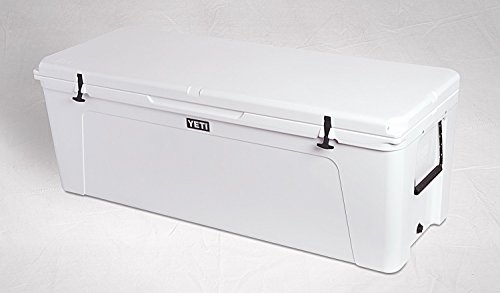 The Yeti Tundra 350 Hard Cooler is not only the biggest Yeti cooler available, but it is also the most expensive. Costing a huge $1500, it is by no means a cheap addition to your outdoor gear.

As well as having all the usual features of standard-sized Yeti coolers, the Tundra 350 can hold 82.4 gallons of ice, fish, beer, and food and has a storage capacity of 19000 cubic inches. In more relatable terms, you can carry 259 cans of beer (2:1 ice to can ratio) or 316 pounds of ice (ice only) in this monster cooler.

Buy Direct from Yeti and SaveCheck Latest Price on Amazon

It has impressive ice retention capabilities and can comfortably keep your food cold and your beer fresh for several days with very little issue.

The Yeti Tundra is a very durable cooler. In fact, it’s certified bear proof so if that doesn’t highlight how tough and well-made this thing is, we don’t know what will. It’s certainly a premium cooler but, if you can justify spending over a thousand dollars on a cooler, you won’t be disappointed with its performance.

Are Yeti Coolers Worth It?

If you are still asking yourself “why are Yeti coolers so expensive?” then it can be summed up in a few points.

They are expensive to make, the brand came to market with a product that was highly sought-after, the brand image is exceptionally strong, people want the coolers, and they perform extremely well.

Make no mistake, you can get much cheaper coolers than Yeti coolers, but if you want to be seen as a true outdoorsman with reliable and innovative gear, you’re probably going to end up with a Yeti cooler.