What Weight Fly Rod for Steelhead? 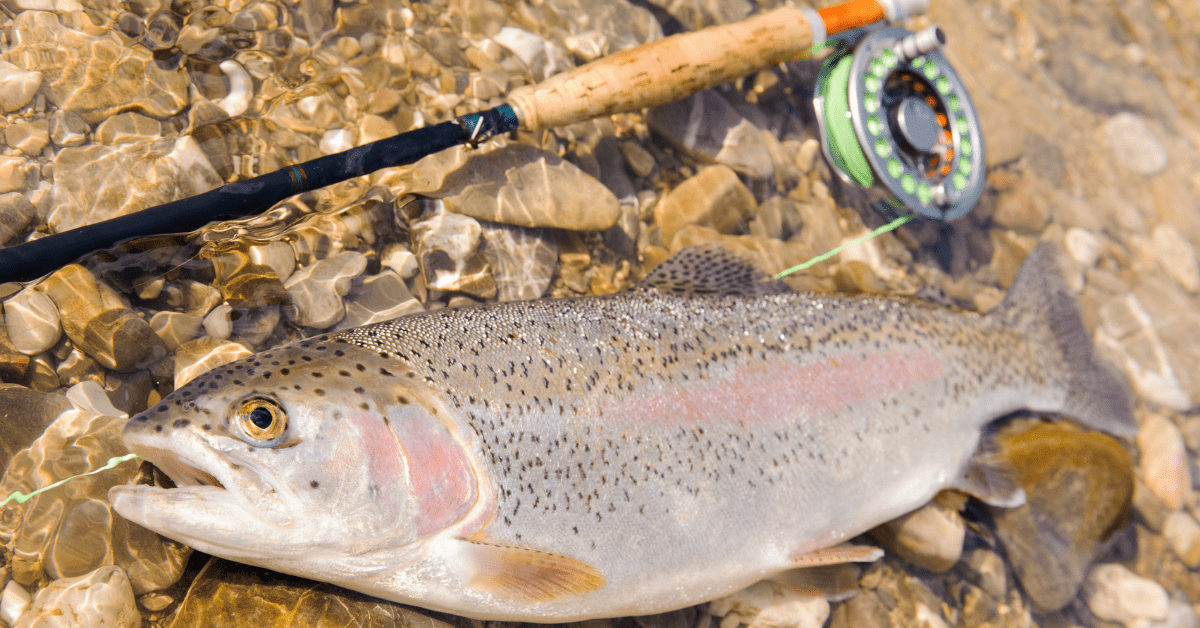 Fly fishing for steelhead is one of the great joys of fly fishing. Regardless of your skill level, you’re going to be tested and stretched in every possible way. Odds are, you’re dealing with challenging weather, challenging water conditions and temperamental fish. In order to set yourself up for success when fly fishing for steelhead, you need to have the proper fly rod. Steelhead are an aggressive and large fish, so it’s best to be prepared with the proper rod for them.

Steelhead Fishing on the Fly

Anglers have fly-fished for steelhead in a variety of ways for years. Whether you’re spey casting through high water or swinging flies for them through long runs, they’re going to test you. Steelhead are going to sit in more slack water waiting to pounce on a fly that drifts or swings in front of them.

In the winter, anglers will find the fish in streams as they’re heading up to spawn. Skagit lines are the line of choice for winter steelhead. You’re likely using large flies, shorter leaders and a sinking fly line that’s going to get to the bottom of the water column. Winter steelhead aren’t looking to take on a dry fly! You’ll find that in the winter, a 10 foot fly rod will do the trick! Remember, in the winter, fish aren’t nearly as eager to feed. They’re preserving their energy, so make sure you’re thankful and prepared if you happen to hook into one. Fly fishing for steelhead in the winter is a treat when it ends in a fish.

As the months warm and the fish get more aggressive, anglers will change to single-handed rods and switch rods. Fly anglers will use Scandi fly lines and long leaders to help present their flies a bit more delicately. The clear water and low flows can make them skeptical of the flies. However, you do have a chance at getting a summer steelhead to take a dry fly. As a result, you’re going to need a 12 foot rod with the ability to lay down these flies in a smooth way. Swinging flies is still the most productive, but you have some more freedom!

As long as you have the proper fly rods and flies, you have a chance at landing both a winter steelhead and a summer steelhead.

What kind of fly rod do you use Fly Fishing For Steelhead?

Fly fishing with a spey rod for steelhead isn’t as complicated as it looks. If you know you’re going to need to cover a substantial amount of water, a spey rod is a wonderful option. Even if you’re fishing a heavily covered area with all sorts of vegetation along the banks, you have a chance to do that with spey rods. The back cast with a spey rod is minimal! Spey rods are fly fishing rods that require both of your hands to make a cast.

Some of the most common spey casts are the Double Spey, Circle, Snake Roll and Single Spey. All of these casts resemble a roll cast, but there is a critical change in direction in the process.

Depending on the style of spey rod and the length, you can cast upwards of 100 feed. Work on your lift and set and your “D” loop, you can learn how to cast for these fish. Spey rods are a bit more of a specialty rod these days, but they’re still extremely effective for steelhead. You have great control of the fly line and they’re a great way to fish for steelhead.

You’re likely aware of their limitations! They don’t work as well in areas with heavy cover, and you’re not going to cover as much ground with them.

If you’re a fan of the double hand cast, but also enjoy the effectiveness of a one handed cast, then a switch rod is for you. Switch rods are usually around 11 feet long and are shorter than a traditional spey rod. You can make every single cast you would want with a switch rod! All spey methods and single handed methods are in play with these.

You’ll find that they’re most at home on bodies of water with significant vegetation on the banks. Where a single handed back cast may not be a possible, a switch rod allows you to make the same roll cast you would make with a spey rod. The longer length allows for this cast and still makes controlling the fly line extremely easy.

However, if you need those 75 foot casts on larger rivers, you can still make a two handed cast with a switch rod. Due to their lighter weight and shorter length, you’ll find that they’re extremely versatile and can perform in almost every situation you need. They’re extremely popular for anglers fishing in Alaska and British Columbia.

What weight spey rod should you use for steelhead?

They world of spey rods can be a bit intimidating. For many anglers it seems almost like an archaic method! While it is a method preferred by the purists, it’s extremely effective. Steelhead fly anglers swear by it.

If you’re fly fishing in the Pacific Northwest, you’ll find that a 12’6″ 7 weight fly rod is perfect option. It’s comparable to a 9′ 6 weight single hand rod. It’s as versatile as they come and you can fish it in a variety of methods and through every season. These rods are great tools to help you learn about the world of spey fishing. The casting takes some getting used to and so does the feel when you’re fighting the fish. You’ll find that you have a great amount of leverage, but it doesn’t always feel like it. Keeping the tension on the fish is vital.

If you’re fishing for smaller steelhead in smaller river systems, then a 11′ or 11′ 6″ 6-weight spey rod is great. It doesn’t feel as bulky and you can scoot around tougher country with it. Yes, it’s still going to feel much longer than a traditional one handed rod, but in the world of spey fishing, it’s quite small and nimble. You’ll find that these lighter rods are a bit more sensitive, so beware of the casting challenges before you hit the water. It’s best to practice on a local pond before you hit those true steelhead rivers.

When you make a trip up to British Columbia and have a chance to land one of those 25 pound steelhead, then a 13′ 7-weight spey rod should be at the top of your list. You’re going to need to make 100 foot casts and fight some massive fish. These rods are up for the challenge, but make sure it’s what you need before you go. While having an extra powerful spey rod isn’t a bad thing, you’ll find that you may need more finesse than you first thought.

What weight one-handed fly rod should you use?

When you’re fly fishing for steelhead with a one-handed fly rod, it’s good to have an idea of the size of fish you may catch. While it’s obviously not possible to predict the exact size, a general understanding is going to give you a good idea of what size fly rod to use.

For steelhead ranging in the four to eight pound range, you’ll be okay with a 7 weight fly rod. Also, you’ll want it to be at least 9 feet long! This length fly rod is going to give you more power as well as more line control when the time is necessary. If you’re fishing a smaller river or stream with spawning steelhead, this option is great for you! It’s still going to handle the fish, but it’s not going to feel overwhelming. Some anglers will choose a fly line that’s a bit heavier to get a better feel, so an 8 weight or 9 weight fly line would work.

When you’re targeting steelhead around 10-15 pounds, an 8 weight rod is a good option. They’re a powerful fly fishing rod, but not so much that you’ll feel as if you brought a gun to knife fight. Also, make sure the rod is at least 9 feet long! A 9.5 or even 10 foot rod might be better since you’re targeting a bit heavier fish. You’ll find a single handed 8 weight is used on medium sized rivers in the Great Lakes region.

If you’re after the large steelhead in British Columbia or Oregon, a 9 or 10 weight fly rod is your best bet. These fish are powerful and going to give you everything they have in the tank. They’ll jump out of the water, drag you 100 feet upriver and give you the fight of your life. That’s what makes them so exciting to target!

What weight switch rod should I get to target steelhead?

In terms of the ideal steelhead rod, a 7-weight 11 foot switch rod should do the trick. It’s long enough that you can make casts all the way across the river, but still manageable enough if you’re finding yourself fishing on smaller bodies of water where they’re spawning. An 11′ switch rod should be able to make 65 or 70 foot casts! The 7 weight is going to handle most steelhead ranging upwards of 15 or 20 pounds!

If you know that you’re going to be targeting larger fish than 15 pounds, then, first of all, congratulations! You’re fishing some special water. However, a 12′ 8 weight switch rod might be better for you. It’s going to feel like a beast of a rod, but if that’s what you need, there’s no shame in it. You still won’t. be able to get to the range that you would with a spey rod, but you’ll be fairly close. Make sure you understand which line goes with which switch rod you purchase. Often, anglers will find themselves in trouble when they have the proper switch rod, but improper line. Fly fishing steelhead is heavily dependent on using the proper line.

If you know you’re going to be fishing for smaller steelhead, then a 5 weight switch rod is fine. It’s a light weight rod, but it’s still effective and can easily handle a smaller steelhead you happen to find! They may be in tight quarters, so the 5 weight is going to be easy to handle and those roll casts will feel like butter. In terms of steelhead fly rods, few are more fun than light switch rods.