What is a Dolly Varden? How to Identify This Char Species 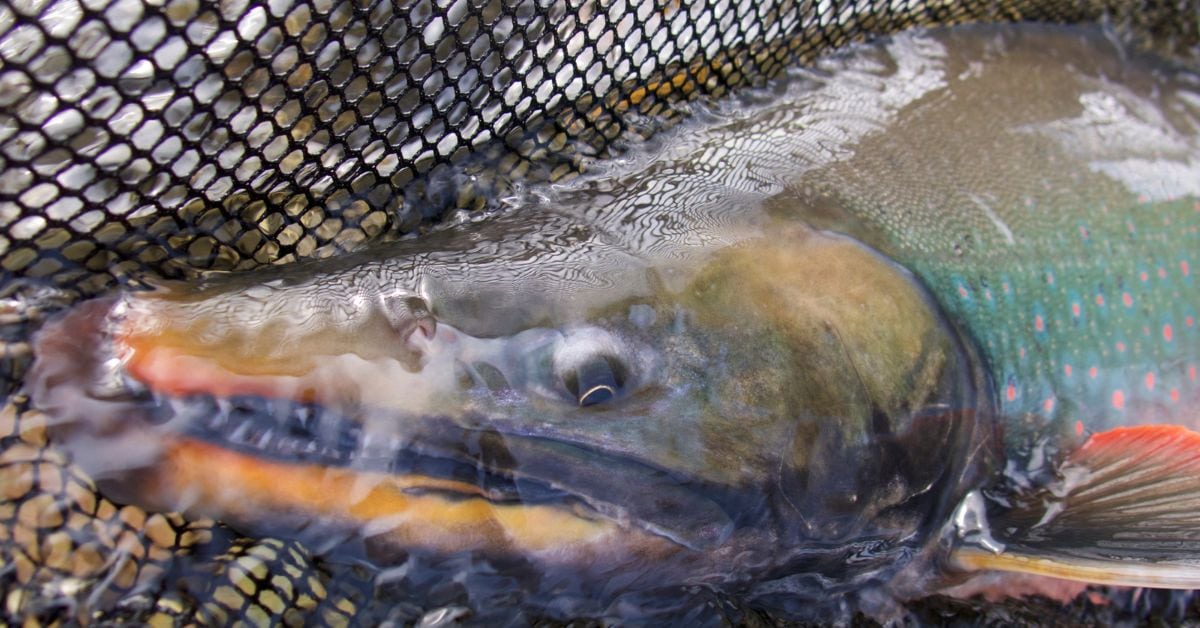 What is a Dolly Varden? How to Identify This Char Species

Dolly varden are a salmonid species found in the Pacific side drainages of North America including Canada, Alaska and Washington State.

Dolley varden are also found along the Pacific coast of Russia south to Japan and Korea.

While often mistakenly referred to as a type of trout, dollies are actually a char species.

Telling trout from char is actually very easy by looking at their spots. Char have light spots (white or yellow to red) on a dark body, while trout have dark spots (brown to black) on a light colored body.

Dolly varden are an attractive fish with red highlights on their fins, tail and on the tip of their jaws when in their spawning colors.

There are both sea run and freshwater resident dolly varden populations with the freshwater fish preferring lakes and large rivers.

Sea-run dolly varden can be found in a range of habitats including brackish estuaries to coastal seas.

What’s with the name Dolly Varden?

Dolly varden got their name from a fish caught in California. The name was supposedly coined by the grandmother in the family who caught the fish who was taken by the bright colors and thought it resembled the fashion of the time in ladies dresses – a muslin dress worn over a bright colored petticoat. Their scientific name is salvelinus malma.

Dollies have dark colored sides(ranging from grey through the brown or olive green) fading to white on the bellies. They have pale spots ranging from pale pink to yellow.

Their appearance is very similar to both bull trout and artic char.

The characteristic red highlights in all three species occur when the fish are spawning. These are most prominent in the makes

Like most salmonids, the anadromous forms of dolly varden are lighter and more silvery in color and tend to darken when they enter fresh water.

Dolly Varden look like, and are often confused with, Arctic char and bull trout.

Here are some key differences to help you tell them apart:

Dolly varden are relatively slow growing reaching maturity at between five and nine years. According to Alaska’s fish and game authorities, the southern form live up to eight years and the northern form up to 16 years.

Dolly varden can spawn multiple times, unlike the various Pacific salmon species who die after reproducing. In general, dolly varden may spawn up to three times during their lifetimes often skipping a year or two.

Dolly varden spawn in between September and November depending on conditions. They look for gravel beds in smaller streams and rivers.

The fertilized eggs remain in the gravel for up to five months and the hatchlings, or alvelin, stay under for another month or two gaining nutrients from the egg sack, before dispersing into the stream.

These dolly varden that choose to go to sea tend to do so in the 2nd 3rd or 4th year in freshwater and depart around May returning to spawn at the usual time.

What do Dolly Varden Eat

Dolly varden are opportunistic carnivorous feeders eating insects as young then transitioning to larger prey such as crawfish, other fish and salmon eggs.

Dollies often follow the main Pacific salmon runs feeding on stray eggs, and later in the cycle on salmon fry.

How to Catch Dolly Varden

Deeper diving lures resembling bait fish are effective, along with spoons and spinners will work, or streamer patterns if you are fly fishing.

Fly fishing is a great way to pick up dollies on the fly, ideally with a sink tip line and egg sucking leech type patterns.

The Alaska Department of Fish and Game has some great info on fishing for Dolly Varden, with tips suggesting:

“Try fishing near spawning salmon, in deep holes, and at the creek mouth on an incoming tide. Fishing for sea-run Dolly Varden in lakes can also be good as they migrate into lakes from late August through October, and are in prime condition after their spring and summer growing season. Ice fishing in lakes during the winter can also provide excellent angling opportunities. A sea-run Dolly Varden caught on light tackle can be an experience not easily forgotten and like other char, the Dolly Varden’s pink, firm flesh is full of flavor.

“Knowing that Dolly Varden hang out at the stream mouths and in the near-shore environment during the spring, and that they are feeding on emigrating pink salmon fry will lead anglers to try small spinners and or fly patterns imitate small fish. As the salmon fry grow and migrate along the saltwater beaches and shoreline during late spring and summer months try using slightly larger streamer flies and lures which imitate small silver colored fish. Coastal streams in August and September can produce excellent fishing for those using spinning lures or fly patterns which imitate salmon eggs drifting downstream.”

The movements of dolly varden are quite variable.

The anadromous fish obviously head out to sea and usually remain relatively close to shore, although fish are recorded to have travelled between the US and Russia. Like the freshwater resident dwelling fish, they overwinter in lakes or rivers.