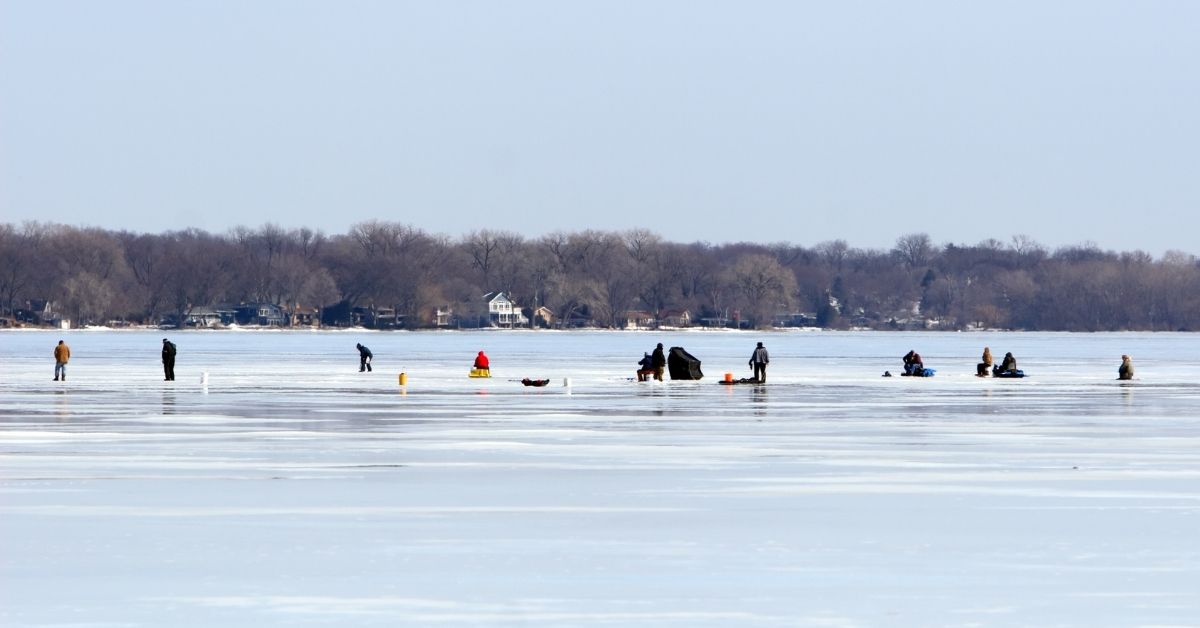 Wisconsin is one of the top places in the United States for fishing. With 15,000 lakes and 12,000 rivers and streams, the fishing opportunities really are endless. Nearly half of the state borders the great lakes of superior and lake Michigan, with miles of water filled with a variety of species. Let’s take a look at the best ice fishing lakes in Wisconsin.

Green Bay is a massive body of water and is sandwiched in between the Door County peninsula and the main portion of the state.

Green Bay has a surface area that is 1,626 square miles, and the bay can vary from stained water and crystal clear water and has various depths and structure.

The eastern and southern portions of the bay typically have lower water clarity, with vast flats that extend from the shoreline and eventually taper into deeper water.

The Door County side of Green bay is much deeper than the eastern side, and the shorelines consist of limestone cliffs and outcrops, and it isn’t unusual to see depths of nearly 100 feet fairly close to shore. The water clarity on the door county side is also very clear during a typical season.

There are also several islands around the Door County peninsula.

Green Bay is considered a trophy fishery for both walleye and musky, but the musky season is closed in the winter months.

The eastern and southern areas, including the mouth of the Fox River, are very popular ice fishing destinations for species like walleye, perch, and whitefish.

There is also some big northern pike in these waters that can be caught.

The perch populations are slowly recovering after being overfished by commercial fishermen for decades, especially in the middle part of the 1900s, and very large perch are starting to be caught on the eastern and southern parts of the bay.

Other panfish species can be caught, and largemouth bass can be caught on the bay as well, but due to the size of the bay, it is very hard to specifically target them.

The Door County side of Green Bay also features some of the best smallmouth bass fishing in the country, but like with other species it’s very difficult to target them in the winter, and instead, most anglers pursue the fish in the spring, summer, and fall months.

If you are interested in ice fishing in Green Bay there are tons of lodging options, many of which are hotels in the city of Green Bay itself.

Door County is a very popular tourism destination in the state, and there are plenty of lodging options including Airbnb rentals.

There are quite a few ice fishing guide services in the area, with most of them specializing in walleye and whitefish.

The majority of fishing on Green Bay is done by jigging for the popular species, although tip ups are always an option for walleye and northern pike.

Lake Winnebago is the largest inland body of water in the state, and it is massive., with the area of the lake covering over 131,000 acres in total.

The water clarity of the lake is pretty low, but can clear up from time to time.

Lake Winnebago is also very shallow compared to it’s size, with the lake being less than 20 feet in depth, with the maximum depth being only 21 feet.

due to being a shallow lake, the topography is very gradual, with most of the lake being made up of expansive flats.

The Fox River flows out of Lake Winnebago, and is one of the few rivers in the world that flows north, where it empties into Green Bay.

There are several other lakes that are connected to Lake Winnebago, such as Lake Poygan, Lake Butte Des Morts, and Lake Winneconne.

The Wolf River that flows south from Northern Wisconsin enters the lake system, and with the lakes and the fox river, make up the Winnebago water system.

Lake Winnebago is unique in the state because it offers a style of ice fishing that cannot be done in the rest of the state unless you are enrolled in the many Native American Tribes, and that is spearing, sturgeon spearing specifically.

Sturgeon spearing on Lake Winnebago is incredibly popular, and a quota is set by the Department of Natural Resources, with the season being very short, and typically only lasts around 2 weeks.

The lake sturgeon is an ancient species with roots going back to the Pleistocene era and can grow to weigh 200 pounds or more.

Ice fishing for most fish is done by jigging or using tip-ups, as is typical of most ice fishing lakes.

For the lake sturgeon, last fish houses are used with no windows, these are also called “dark houses” and very large and long spears are used which are attached to ropes.

Sturgeon spearing is done via sight fishing, and is the reason for the dark houses, to keep outside light from obscuring the anglers’ view into the murky water.

When looking at ice fishing on Lake Michigan, we need to dial down to specific areas.

In this section, we will look at specific areas such as the towns and cities of Sheboygan, Milwaukee, and Algoma.

If there is a typical cold winter the ice fishing off of the coast is safe to travel and fish, and these areas off of shore, the tributaries, and the frozen harbors offer some great fishing opportunities.

If you want to catch brown trout, steelhead, and even walleye, these will be the places you want to visit.

Much of the fishing done for trout is done right next to shore in the harbors and piers, with the most notable being the city of Sheboygan.

The tributary rivers that lead to Lake Michigan can be a haven for trout, and if the ice is thick enough, anglers can catch a great number of fish in a day, with the average size being significant.

If the tributaries are not frozen over, you can still fish for trout like steelhead, and doing so on the fly is the most popular method.

For ice fishing, most anglers either jig or use an automatic fisherman, which automatically sets the hook of a jigging rod, and works similar to a tip-up.

The Madison chain of lakes is located smack dab in the middle of the capital city of Wisconsin of the same name.

All of these lakes are connected via channels and all feature boat landings for easy access.

The Madison chain of lakes has good fishing for must inland species of fish commonly found in a Wisconsin lake.

There are also plenty of lodging options due to it being in the center of the city, but that also comes with a downside, as fishing pressure is high, and the big fish are very wise, so be sure to bring your A-game.

Lake Waubesa is probably the most consistent producer of all fish species present and has a decent number of fish.

The Mid-lake areas of Lake Mendota are great for walleye during the lowlight hours, pike, and bluegills.

Lake Mendota is also known to host trophy-sized northern pike, so bring your tip-ups and smelt.

Lake Monona probably sees the least fishing pressure out of all the other lakes. Setting up on the weed edges of this lake can be great for panfish and northern pike, and can also have a good crappie bite.

For pike, use large smelt or shiners under tip-ups on weed edges or around mid-lake structures.

Walleye can be caught both jigging or on tip-ups, and for panfish, search around green weed beds as well as the edges.

Big green lake is the deepest inland lake in Wisconsin with a maximum depth of 236 feet. The lake is also one of the larger lakes in the state coming in at nearly 8000 acres.

There are “shallower” areas such as a large point that is around 60 feet in-depth, but the shallow water areas are typically very close to shore, with the bays on each end having shallower water and some flats.

Big green lake is one of the only inland lakes in Wisconsin that host a population of lake trout, and many anglers travel to the lake to try to catch this fish in the deep waters.

There is also a good population of big pike and walleye as well.

Jigging is the most common way to catch lake trout and walleye, but tip-ups are great for both walleye and pike.

Final Thoughts on the Best Ice Fishing in Wisconsin

These lakes are the tip of the iceberg in terms of great ice fishing lakes in Wisconsin. The best part about fishing in this state is exploring new lakes.