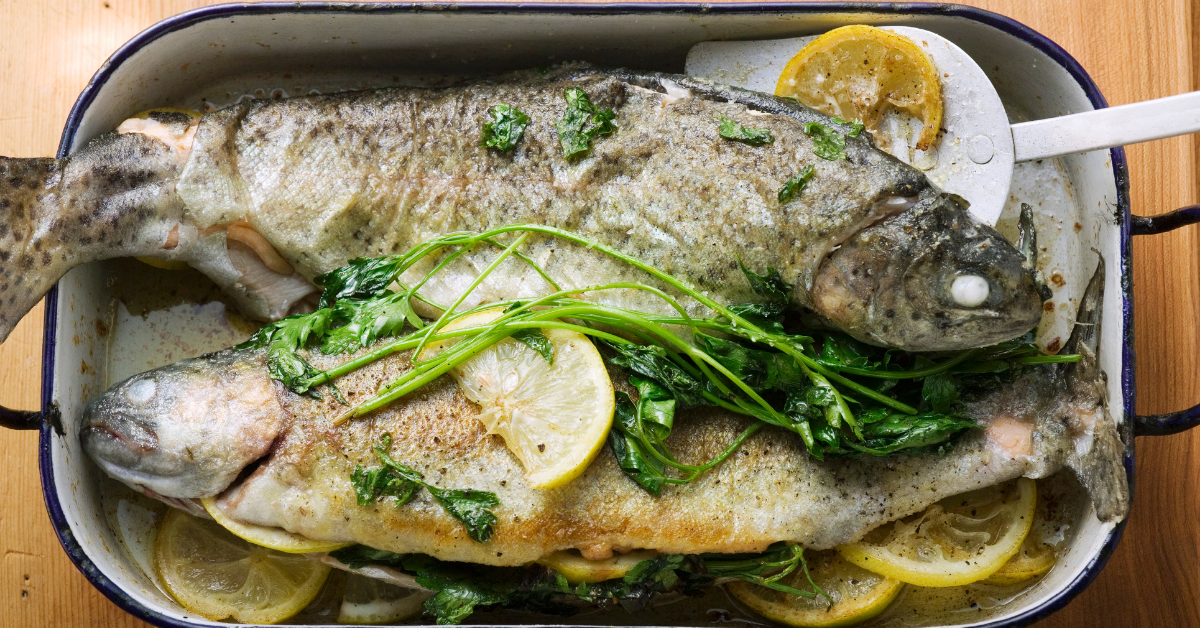 Tasting different foods from around the world can be an enjoyable and worthwhile experience.

You may find textures and tastes that you have never known, and it could open up your culinary world to a whole new avenue of foods.

That being said, it can be quite daunting trying new things with no idea of what to expect and whether you are likely to enjoy it or not.

Fish brings many different tastes so they can be an interesting food source to experiment with.

If you are thinking of trying trout for the first time, this article will introduce you to its flavors, cooking methods, and tasty varieties so you can enjoy your first trout meal without any worry.

Trout is a popular fish to eat as it has a mild and relatively soft flavor.

Each species of trout tends to have a slightly different flavor but, in general, trout is not a fish that tastes particularly “fishy” and has a much more bland taste to it (in a good way!)

Brown trout probably has the most fish-like taste of all species. This is because it has a high oil content. This species of trout tends to have quite an adaptable flavor and it can taste more like the things it has been eating as opposed to having a common fish taste.

Speckled trout has a mild and much more delicate flavor to it compared to other trout species.

Steelhead trout is the most salmon-like in terms of behavior. Taste-wise though, steelhead trout taste like a mild salmon but still have the softness, and subtly of a trout.

Lake trout, despite growing to a good size, are not usually the tastiest of trout to eat. They are quite greasy fish and have a high-fat content giving them more of a fishy flavor than you would get with other species.

Why are rainbow trout so tasty?

The meat from rainbow trout is tender, lean, and has a mild flavor to it.

Although mild, rainbow trout has a slightly nutty taste to it making it a very pleasant fish to eat.

Rainbow trout is similar in flavor to salmon and has edible skin which turns a nice golden color during the cooking process.

One of the best things about rainbow trout is that it can have a different taste depending on the method of cooking you choose.

For example, if you were to grill or roast your rainbow trout with brown sugar then it would have a sweeter taste. However, if you choose to fry it in butter, it can have a more savory taste to its flavor.

This species of trout is a less oily fish and is considered to be one of the most healthy fish species to add to your diet. It is full of good fats and has a high-protein content too.

As previously mentioned, rainbow trout taste the closest to salmon.

Trout and salmon are closely related so there are some similarities between the two types of fish although their taste is slightly different.

Salmon has a more powerful flavor than trout and is the sweetest of the two fish.

Most species of trout taste milder than salmon.

How about sea trout?

Sea trout, like its freshwater counterparts, has a mild flavor and a soft, delicate texture to its meat.

The main difference between sea trout and freshwater trout tastes is due to the increase in the production of amino acids in saltwater trout.

Sea trout taste is also not a typical “fishy” taste and the flavor can be somewhat altered depending on the cooking method you choose.

The environment they live in probably has the biggest influence on trout flavor.

Choosing trout from the most suitable environment for your taste preferences can actually make quite a big difference in your enjoyment of a meal.

If you choose the wrong species then you could end up with a more “muddy” flavor instead of a milder, sweeter taste.

Lake trout usually have a much more pleasant taste than wild river trout. This is due to the diet of the fish. In lakes, the trout have a wide variety of food sources available to them so they can be more selective in what they eat.

Rivers flow faster than lakes so food sources are usually constantly moving away from the trout that live there. This means the fish have to eat whatever they can find to make sure they survive. By having a less selective feeding process, river trout tend to eat things that have a more negative impact on their flavor and overall taste.

The food the trout eats affects the color of its flesh. Lake trout with pink flesh will taste better than white-skinned trout usually found in rivers. so if you have the choice, pink should be your preference.

Something else to keep in mind is the type of water the trout have been living in. Saltwater trout has a more powerful taste than freshwater trout. This is mainly due to the previously mentioned amino acid production.

As the trout from the sea have to deal with high salt content, more amino acids are produced with each one having a specific taste that adds to the overall flavor of the fish.

Freshwater fish do not have to deal with saltwater so, therefore, end up with a milder flavor as fewer amino acids are produced throughout their life.

How do you cook trout?

The way you cook your fish will obviously have an effect on how the trout tastes.

The main ways to cook trout are:

Frying – this is a great way of cooking trout if you like crispy skin on your fish. Frying freshwater trout is a simple way of adding flavor to its naturally mild taste.

Grilling – cooking your fish using the grill can be done with a whole trout or one that has been filleted. You should make sure your grill is at a high enough temperature for the trout to cook quickly otherwise it is likely to flake and fall apart due to its delicate nature.

Baking – as trout is such a light and delicate fish, it can easily be damaged during cooking. Baking reduces the risk of damaging the fish so is a popular method of cooking trout. The only downside to baking is that it does take slightly longer than other cooking methods.

Stocked trout is a term that relates to trout born and raised in captivity whereby wild trout is referring to the fish born and living its life in its natural habitat.

When it comes to the flavor of both types of trout, wild trout tends to be a more mild-tasting fish whereas stocked trout usually has a more “fishy” taste to it.

This all comes back to the diet of the fish.

Wild trout eat a more varied diet and eat what they are naturally designed to eat. Stocked trout are commonly fed on pellets that are used to make the fish as big as possible in a short period of time.

Feeding fish in this way increases the fat content of stocked trout and alters their taste.

Wild trout taste is commonly preferred over the stocked trout taste so knowing the background of the fish will help you understand more about how it will taste once cooked.