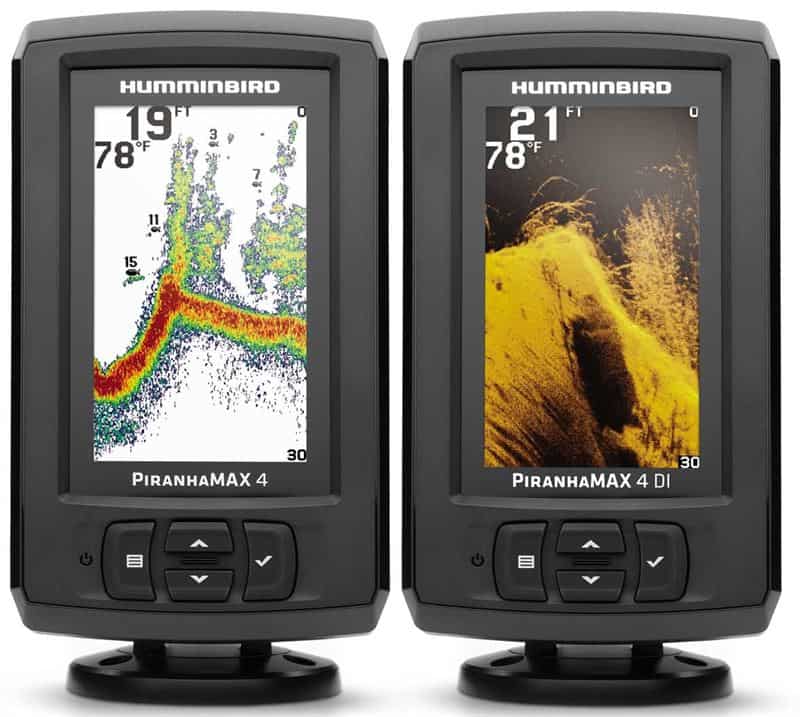 The Humminbird PirahnaMax is a great sonar unit for budget and beginner anglers, or for those who simply only want or need the core function of a 2D sonar unit without any extra features or gadgets.

(Please note: These units are now officially known as the Humminbird PiranhaMAX 4 series now. It is exactly the same unit and choice of models, but Humminbird has given them a different name!). I am just glad they kept the piranha in the name!

Let’s take a look at the Humminbird PirahnaMAX, its features, and the anglers it is best suited to.

Features of the Humminbird Piranhamax 197c

As mentioned in our introduction to the Humminbird PirahnaMAX 197c, it’s a simple and compact design that has only one major operational feature, and that is its sonar.

The Humminbird PiranhaMAX 197c comes with the crisp color high definition standard sonar that anyone familiar with Humminbird will know well. The sonar return on the screen is so clear that you can see individual fish and tree branches, among other objects with ease. Models labelled DI (Humminbird Piranhamax 197c Di) also have the monochrome structure downscan imaging technology that helps you pick out structure better.

The Dual Beam sonar is the more traditional style sonar, which still has its place in the fishing world despite the high definition returns of down imaging.

The main reason it hasn’t disappeared from sonar units despite down imaging is due to the dual-beam selection it offers anglers, you can choose the Narrow beam setting for a detailed picture of the bottom or the wide beam for a sharp details across a generous coverage area.

This unit has two sonar beams at frequencies of  455 and 200 kHz. What this means is a narrower beam creating a 16 degree cone providing great detail, and a wider sonar cone of 28 degrees covering a much larger area on the bottom.

Humminbird’s Dual Beam Plus gives you multiple options when it comes to finding structure, fish, and reading the bottom composition as well as contours.

Dual-beam sonars also have variations in color to give the user feedback on the strength of the readings, which helps determine things like density in terms of weed growth, bottom composition, or size of an object. With the bottom or dense weeds and large fish typically reading as red, meaning solid echo returns.

This compact device comes with a vertically aligned 4.3 inch display size. Whereas most fish finders are arranged horizontally, we think it is the right call for Humminbird to change the layout here in order to show as much of the water column as possible with a small screen size. It is a high quality screen with a good color range and backlit display that can be seen easily in light conditions ranging from direct sunlight to darkness.

The user interface of the PirahnaMAX 197c is incredibly easy to use. There are 4 buttons that do all your menu options, sonar options, and settings changes, making it quick, easy, and hassle-free.

This ease of use is great for beginners who aren’t familiar with the more complex features and settings of more expensive units, and people who don’t have the need for these complex units, and simply want to know the bottom composition, depth, and if there are any fish in the area.

Key information provided on color display screen includes all the obvious things: depth, topwater temperature, bottom profile and sonar returns of fish, which are marked with a basic fish ID that gives and indication of fish size and depth. You can also set a fish alarm to alert you to the presence of a fish and a depth alarm to warn of shallow water.

The PiranhaMAX is a very small and compact sonar unit, which is a major advantage in certain situations including shore fishing.

The unit comes in two major versions, one of which is the standard version for your fishing boat, and the other version is an ice fishing version, which comes complete with a carrying case, and a special ice fishing transducer setup.

For open water fishing, this compactness has some serious advantages for kayak or canoe anglers heading offshore, taking up minimal space when every square inch of space is highly coveted and valuable.

An idea that I also thought of in terms of this unit’s compactness is for far-flung fishing trips. For example, if you book a trip to a fly-in lodge to  some other far-flung destination, you could easily pack a PiranhaMAX along with a clamp-on transducer pole, either bought or made yourself to attach and use on the boats provided by the lodge.

Most lodges have a standard aluminum 14-foot fishing boat with a motor and nothing else, having the capability of easily attaching and using a PiranhaMAX could help greatly when it comes to fishing these new waters if you aren’t going with a guide.

The advantages of the compact design for ice fishing should be a no brainer. Ice fisherman in many cases have a sled to drag their gear across the ice, and for me personally, I do everything on foot, no ATV or snowmobile, when the ice is thick enough I will hop around a body of water with my truck, but I tend to remain mobile, actively seeking out suspended schools of crappies, perch and the like.

If you are like me the PiranhaMAX is a perfect unit, being small, only having a footprint of about 4x4x7 inches with a 240 pixel resolution screen, allowing me to set it right in the sled or a bucket, alongside my other gear, or if I’m in my truck hopping spots, right on my center console or passenger seat.

The convenience of stopping, drilling a few holes in an area while looking for a specific piece of structure or depth, dropping in the transducer, and getting an instant reading of the bottom and any fish icons showing is priceless and incredibly efficient, at that point I can either choose to move on or grab my ice rods.

The PiranhaMax comes in 3 different models.

So who is this portable fish finder for?

This sonar unit is going to be for fishermen who don’t need a high tech GPS/sonar suite, like fishermen with small boats, traveling fishermen, budget fishermen, and one of the big ones, kayak anglers.

This thing is very popular with kayak fishermen because of the things it brings to the table as discussed earlier.

Ice fisherman definitely like the PiranhaMAX, its compact nature, fish ID and alarm and doing the most important job needing in an ice fishing unit well makes it a winner in the ice fishing community.

Traveling fishermen who are going to fish remote locations, wherein many cases, the boats provided do not have any sort of sonar units.

Maybe you’re just a guy who likes fishing and you just have a modest 14-foot aluminum boat with a 25 horsepower 1987 Evinrude (literally me for several years of my life) and you either can’t afford to look at fish finders costing 1000 dollars or more, or you simply don’t want to.

Can I Get By With This Unit?

Absolutely, it may seem like this sonar unit has nothing to offer when compared to the high tech, top of the line GPS/Sonar units with side imaging and the like, but this unit wasn’t designed to compete with those units as Humminbird offers those types as well.

This unit is simply filling a few niches, niches that don’t have the need for these expensive and larger units. As mentioned above, kayak anglers, budget anglers, ice fishermen –  all of these anglers and situations don’t need units with side imaging, sure, you can use them in all these applications as well, but it’s not really necessary.

I use the PiranhaMAX ice fishing small lakes that don’t have a lot of variation in terms of depth, many of them are “bowl” style lakes, and I simply walk to the middle of the basin and drill a dozen holes and start fishing, this type of unit in this situation allows me to see when schools of fish pass through, or when they are approaching my bait.

For other ice fishing situations, like finding the edge of a weed line or drop off. I simply drill a line of holes leading to deep water every 5-10 yards, dropping my PiranhaMAX as I go to find that exact weed edge.

For Kayaks, you can buy a transducer pole to mount the sonar transducer and easily mount your unit. The great part about this unit for kayak anglers is that it’s easy to take off as well with a detachable power cable and transducer cable.

Now the great thing about the ice fishing version, is that you could take the mount out of the carrying case, and purchasing the open water specific transducer instead of the ice fishing one, you could use the same unit for both ice fishing and boat/kayak fishing, making this thing even more versatile.

Many anglers get the idea that they need the best units with the best features, and this is just isn’t the case in many situations. Sure, if your fishing a large body of water with complex weed lines and structure, a top of the line sonar unit is worth its weight in gold, but for small bodies of water, traveling to a remote location, ice fishing, and kayak fishing, these units will excel at the given task with flying colors. It’s important, for you as an angler to determine your needs on the water, and base your decision on those needs, and hopefully, this article illuminated why you should consider portable fish finders like the PiranhaMAX.