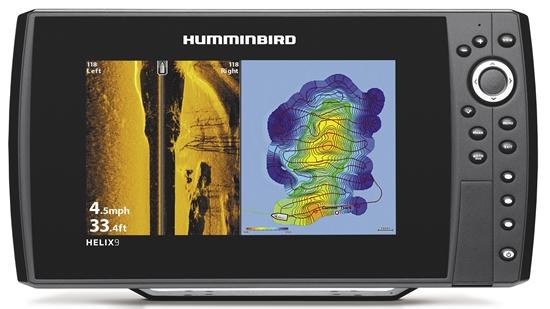 Our review of the Helix series of sonar units by Humminbird comes in at 4/5 stars.

The Helix models are a great series for your average recreational angler and the more serious angler alike, being jam-packed with incredible features and very user-friendly.

The Helix models are great for intermediate and expert anglers and come with everything you can ask for in a modern sonar/GPS fishing unit.

The models vary a bit, with some featuring CHIRP, MEGA imaging, or side imaging (SI), while others have solely down imaging or (DI); all Helix units do come with GPS, so that isn’t something you have to worry about between models.

These are important features, and we will explain the differences further along in this Humminbird HELIX review.

Other features come down to things like screen size, Autocharting, and networking capabilities; other than these outliers, the variants in the helix model are the same.

MEGA imaging is something that makes the Helix models and Humminbird models, in general, stand out in the market. MEGA imaging increases the depth readings of the sonar unit to 200 feet while offering 20% more clarity and detail on your display.

With MEGA down imaging they also now have the full 360-degree mode for MEGA imaging to give you an all-around view of the water around your boat.  Note that the 360 imaging is only available if you purchase the transducer for it.

Side imaging was a real game-changer when it first appeared and has become a feature of sonar units that many anglers simply can’t live without.

Side imaging directs the sonar beams to the sides of the boat, allowing you to see and structure or suspended fish to your left and right, as well as down.

This feature is great for mapping out weed lines or any type of structure which you can then set waypoints to by putting the cursor directly over the object in question, which will automatically be put on your GPS map.

Down Imaging and CHIRP

Down imaging is more of a classic sonar tool, with the exception that the imaging is extremely clear and high definition. Tree branches, fish, and rocks are all clear and present with the ability to even see fish in and amongst a tree limb and branches.

CHIRP on the other hand is your standard sonar picture, with the varying colors indicating weak to solid readings and structure like tree branches looking more like blobs than tree branches in many cases.

Humminbird has Integrated mapping systems in each GPS unit and is based on data from both Lakemaster and the NOAA, but some of these maps like C-MAP can be pretty basic and lack fine contour detail on some bodies of water.

I highly recommend buying the Lakemaster or Navionics map cards for your state, region, and body of water if available.

These maps are in my opinion typically much more accurate on the water than the standard integrated maps, and in terms of aftermarket mapping solutions for units wins.

The Helix units feature the Autochart plus feature which is great in aiding anglers uncover lakes that don’t have a map on the integrated or aftermarket options.

The Helix can hold up to 8 hours of data from chart plotting with autochart allowing you to idle around and map out vast areas or even entire bodies of water depending on the size.

Most Helix models are capable of linking up into Hummingbird’s “one boat network”, with the exception of the Helix 5 G2 and Helix 7 G3.

The one boat network allows you to link your units together to see GPS waypoints on either one or link up with your Minn Kota trolling motor for precise route planning along with your GPS waypoints. The Helix G4N models also have WIFI built in for even more connectivity.

One other special feature to note on the Helix series is the keypad controls. While some units feature touchscreen capabilities, when touched with wet hands and fingers the water residue can actually make it hard to see them, with the watermarks reflecting light.

The keypad controls don’t have this problem even if it’s “not as cool”.

The keypad control system also allows you to program certain keys to access selected parts of the menu, and the menu and settings navigation very user friendly without having a steep learning curve like with other brands on the market.

Who Is The Helix Made For?

The Helix isn’t some elite angler-only sonar, even if elite anglers use them. It’s tailored to meet a wide range of needs from anglers across the board.

With more basic units like the two that don’t have networking capabilities more suited to smaller boats and anglers who only need one unit, to large 15-inch screen units that link to other helix units and trolling motors alike for the serious angler who guides or fishes tournaments. 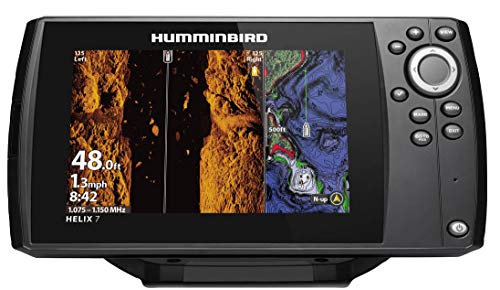 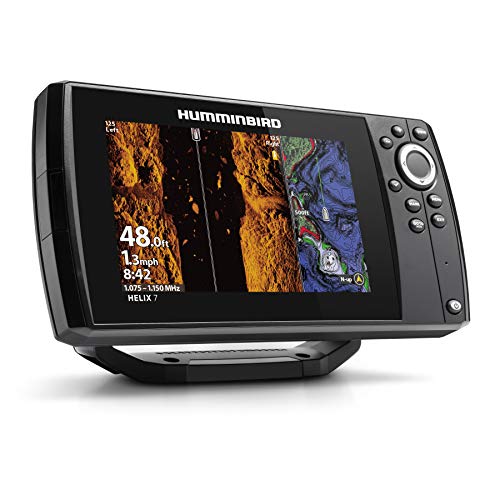 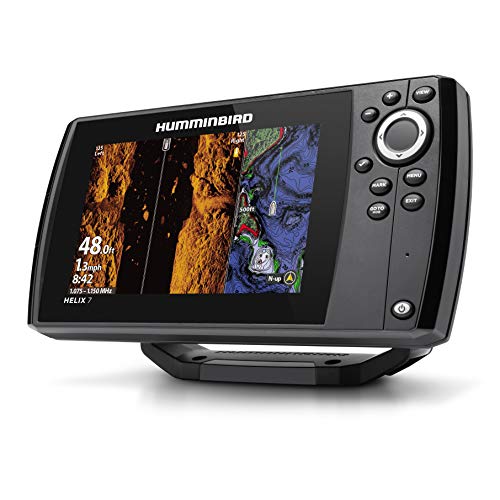 Probably the most popular model in the range, the 7-inch HELIX is the perfect size to put in a kayak or small boat.

There is enough screen size to run split screens provided the unit is relative close to you and its small enough not cramp your style on a kayak or in a small boat cabin or console. 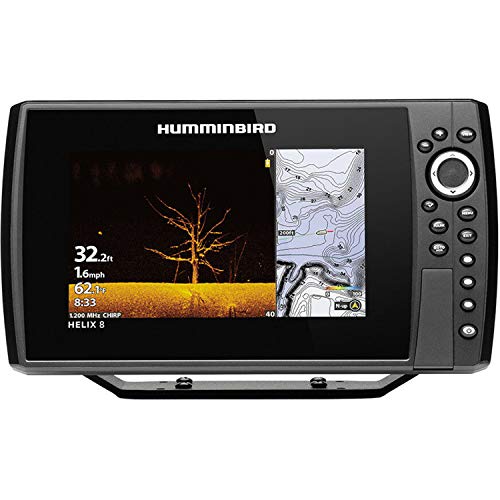 The Helix 8 is great for someone looking to upgrade to a unit for the first time, or someone on a budget or with a smaller boat and don’t need a giant screen.

The helix 8 comes in multiple variants including all features from MEGA imaging, down imaging, side imaging, and is networking capable. 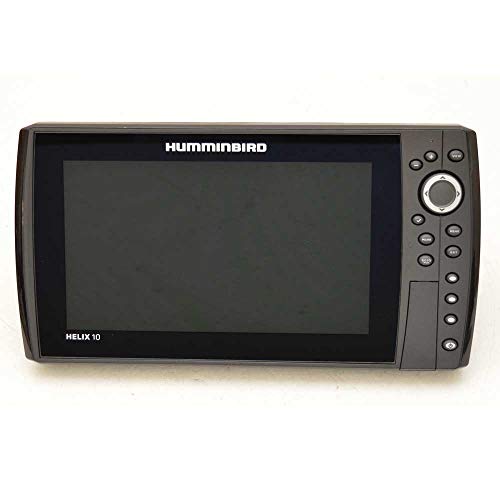 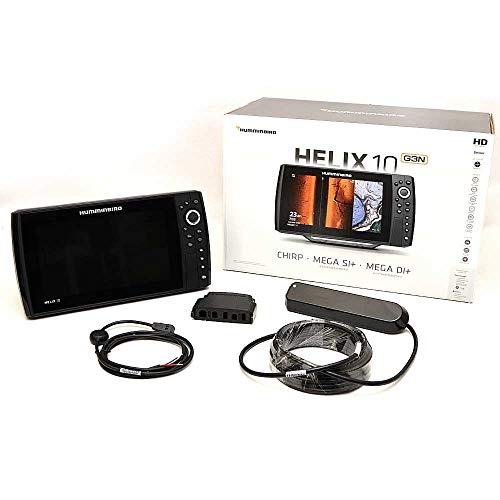 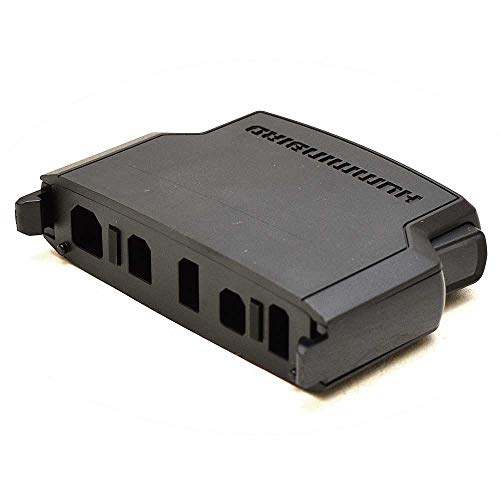 The Helix 9 is the same as the 8 with all the same variations in features but does have all of them depending on the unit like the others.

The only real difference here is you get a full square inch added to your screen. This fits the same angler group as the Helix 8. 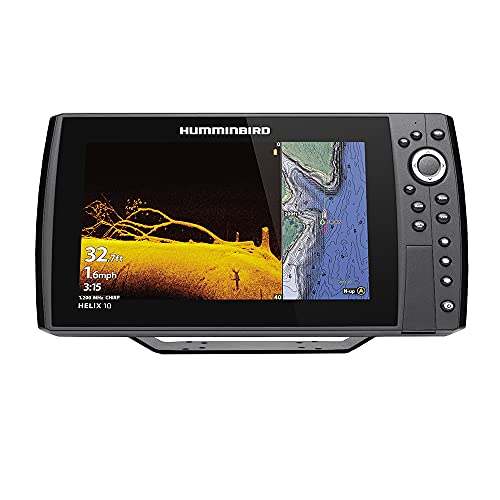 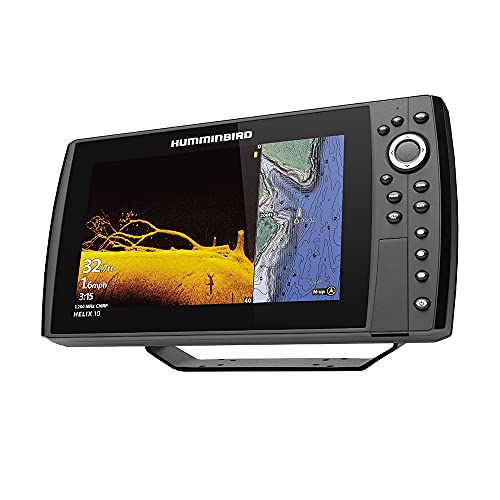 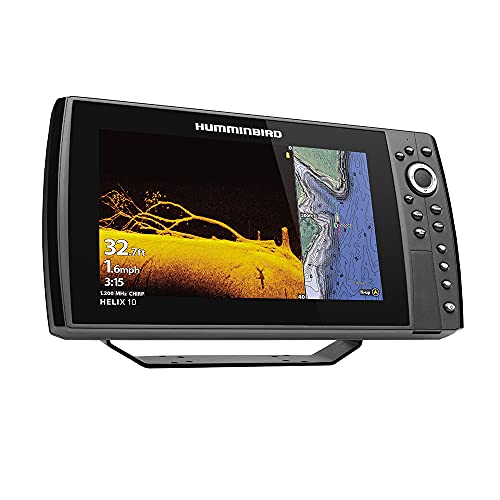 Same as the 8 and 9 series, with even a larger screen.

This one is getting into serious angler territory and for larger boats where you may be several feet away, but still need to see fine details on the screen. 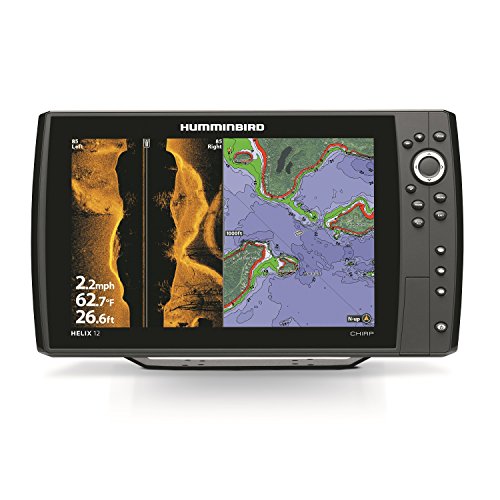 These two are the biggest offering in screen size and is best suited to very large boats such as offshore boats or walleye boats on big water.

Some anglers get them just as a luxury of having a big screen in their face.

Humminbird isn’t the only Sonar fish finder company out there obviously, and there are other great units on the market you should look at such as Lowrance and Garmin.

One of these brands might have a feature that piques your interest more or is better suited to your needs on the water, and both are competitive in terms of functionality and price. 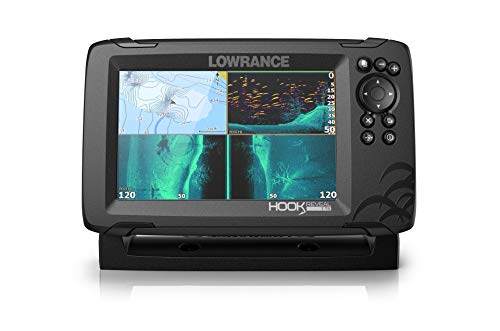 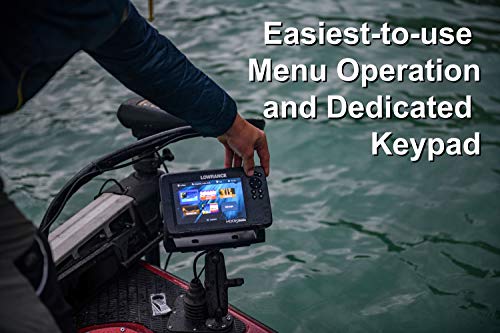 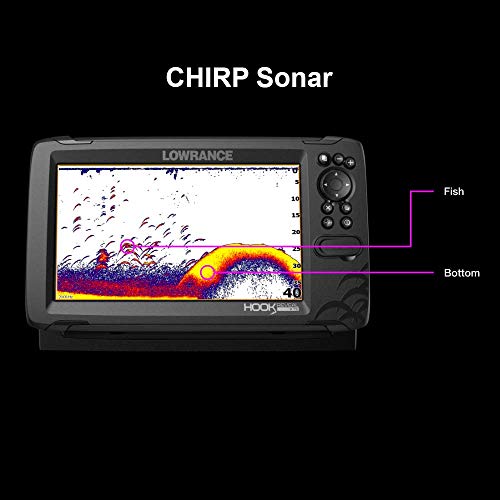 The Hook Reveal is Lowrance’s entry to mid-level sonar unit. With the Triple Shot model, you get conventional sonar, structure downscan, and side imaging.

The split shot models have conventional sonar and downscan but lack the side imaging sonar feature which might not be a concern depending on your needs.

This model also has Lowrance’s FishReveal technology, which applies the colored fish arches to the downscan images.

This is a game-changer for units in and around thie hook reveals price range, The FishReveal technology helps entry-level angers identify fish signatures on sonar easier when downscan would give a more subtle image that entry level users might miss.

ECHOMAP units range from mid price to higher end and have all the features associated with a sonar unit at this price range. Excellent mapping, sonar, and chartplotting are included.

The only differences between many of the models are whether or not they are compatible with the panoptix or livescope transducers.

Some come with the livescope at a higher price while others feature the mostly standard down imaging, so be sure to consider that when purchasing, or simply purchase both transducers to swap out when needed.

We hope this Humminbird HELIX review has helped you work out if this is the right fish finder for you. The Helix series will suit most anglers’ needs on the water and will aid in finding structure or fish much easier than sonar units of the past.

The only important things to consider are just exactly what features you need. Finding the right unit is also pretty easy for potential buyers as they are usually listed right in the name of the Helix Model.